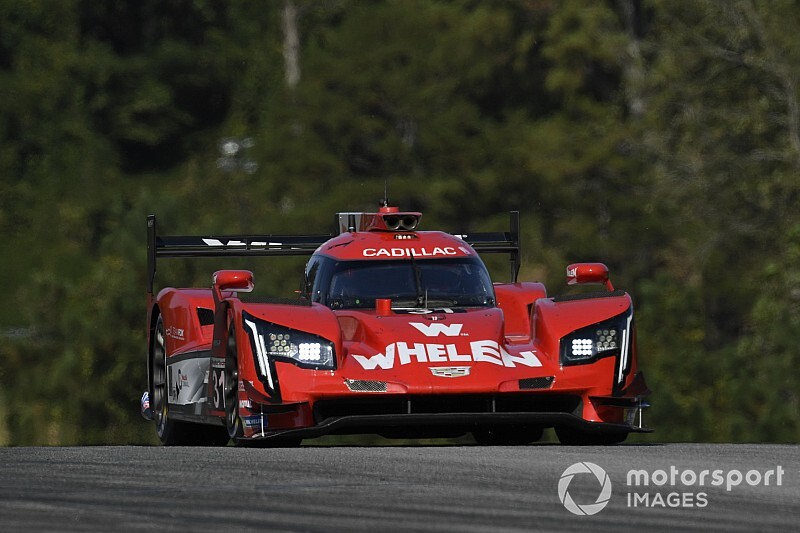 Nasr rocketed away from his opponents, pulling almost 10sec in the first dozen laps. On Lap 15, Albuquerque made it an AXR 1-2, swooping past Taylor in traffic although he was now 14sec behind his teammate. Taylor quickly gave up a further place to teammate Cameron, but the #6 then relinquished that place after just 33mins to pit. Next time by, all the other DPis – bar Pigot who’d stopped a couple of laps earlier – pulled in. The #77 of Bernhard overshot its box by a large margin and had to get pushed back by the crew. He would rejoin 10th but still on the lead lap.

After the stops, Van der Zande had the WTR Cadillac in fifth ahead of Tincknell’s Mazda, while Pigot’s slightly early stop had appeared to pay off as the Juncos car ran seventh.

After 55 laps, Nasr’s lead over Albuquerque was 20sec, with Cameron a further 20sec down in third. At the second stops, Nasr handed off to Derani, while Penske’s two Indy 500 winners Juan Pablo Montoya and Helio Castroneves took over the Acuras in third and fourth. The Mazdas also changed drivers, Jonathan Bomarito getting the #55 Mazda RT24-P ahead of van der Zande’s WTR Cadillac, with Oliver Jarvis replacing Bernhard in the #77 and up into seventh.

The first yellow flew when Cameron Cassels’ Performance Tech Oreca P2 car went off line to let Montoya through at Turn 3, came back on line in front of Castroneves, and when the Acura tried to go the other side at Turn 4, the pair made heavy contact. The Oreca flew into the wall, and the front of the #7 Acura sustained heavy bodywork damage. He would pit and emerge in seventh, as the rest of the Prototypes stopped.

Montoya comfortably jumped Albuquerque on the restart to grab second and split the AXR Cadillacs, although Penske simultaneously took a knock as Castroneves was adjudged to blame for the collision, and was given a drive-through penalty. Albuquerque would retake second from Montoya on Lap 82 and, JPM was under pressure from Bomarito, van der Zande and Jarvis.

James Calado retained his advantage in the Risi Competizione Ferrari 488 ahead of the BMW of Philipp Eng, while Richard Westbrook jumped to third in the #67 Ford GT ahead of the Porsche 911 RSRs of Laurens Vanthoor and Nick Tandy. The Corvette C7.Rs of Oliver Gavin and Antonio Garcia ran sixth and eight, separated by the second Ford of Joey Hand, and ninth and last ran the BMW of Colton Herta.

A battle between Eng and Westbrook allowed Tandy to not only pass Vanthoor but move into second although his Porsche was now over 8sec behind Calado’s flying Ferrari. Eng then fell to fifth behind Vanthoor.

Gavin and Herta would be the first to stop, just before the half-hour mark, and both fell a lap behind class leader Calado. After 43 minutes, Eng pitted and the M8 was taken behind the wall. As the GTLM cars came in on sequence, Calado handed over to Alessandro Pier Guidi, Tandy gave up his seat to Frederic Makowiecki, but Vanthoor stayed on board the #912 Porsche. A long first stint for the Fords saw Westbrook resume in second ahead of Makowiecki, with off-sequence Gavin in fourth ahead of Vanthoor. However, the charging Joey Hand went into third in the second Ford.

When the first full-course caution flew, the GTLM cars took the opportunity to stop, and the two Fords for Hand (#66) and Ryan Briscoe (#67) emerged ahead of the Risi Ferrari now steered by Daniel Serra. Behind this trio ran Jan Magnussen now in the #3 Corvette, the two 911s now piloted by Patrick Pilet and Mathieu Jaminet, Tommy Milner in the #4 Corvette, and Connor de Phillippi in the #25 BMW.

Following the first round of stops, Bryan Sellers took over from Lewis and resumed in the lead ahead of the Ferrari now steered by Cooper MacNeil. Keating stayed on board the Riley Mercedes and retained third but the car he was now leading was Zacharie Robichon’s Pfaff Motorsports Porsche, ahead of Dillon Machavern’s Turner Motorsport BMW M6.

Following the stops during the first caution period, the Paul Miller Racing Lambo fell to third, MacNeil taking over the lead for Scuderia Corsa, with Lars Kern second in the Pfaff Motorsports Porsche. In fourth was Felipe Fraga in the Riley Mercedes, ahead of Morad’s Montaplast by Land Audi R8 and Machavern in the Turner BMW.

On the restart, however, Sellers and Fraga quickly deposed Kern to take second and third respectively, and closed in on MacNeil. Fraga then went past Sellers and the pair of them zapped the leading Ferrari at the two-hour mark.