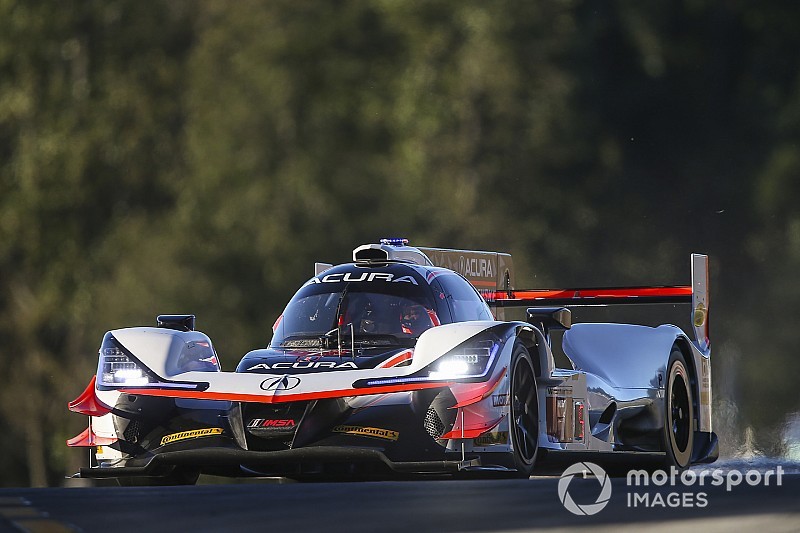 The Penske Team Acura of Graham Rahal, Helio Castroneves and Ricky Taylor is leading at Road Atlanta just ahead the #77 Mazda and the recovering #22 ESM Nissan.

The field went under full course caution as the race approached its halfway point as an apparent rear suspension failure struck the Oreca of Performance Tech Motorsports and a rear puncture was suffered by the #85 Oreca of JDC Miller Motorsports, almost simultaneously. The latter was adjudged to have been caused by the #5 Action Express Racing Cadillac who then received a drive-through penalty.

That left Rahal just ahead of Jarvis, with Johannes van Overbeek third in the #22 ESM Nissan ahead of Ryan Hunter-Reay in the Wayne Taylor Racing Cadillac.

Felipe Nasr made his seventh stop in the #31 AXR Cadillac very early, just 15 laps after his sixth, while holding a 37sec lead over the #7 Acura and handed over the car to Gabby Chaves who currently runs fifth.

Marino Franchitti suffered a long stop after needing a new engine cover when he had to take to the grass to avoid a Porsche 911 and the juddering broke the rear bodywork.

Championship leader Antonio Garcia in the #3 Corvette runs third ahead of teammate Oliver Gavin, with Earl Bamber fifth for Porsche. Sebastien Bourdais had been in third but fell to sixth soon after the restart.

Madison Snow leads GT Daytona in the Paul Miller Racing Lamborghini Huracan ahead of Alvaro Parente in the Meyer Shank Racing Acura, who is trying to help teammate Katherine Legge beat Snow and Bryan Sellers to the championship.