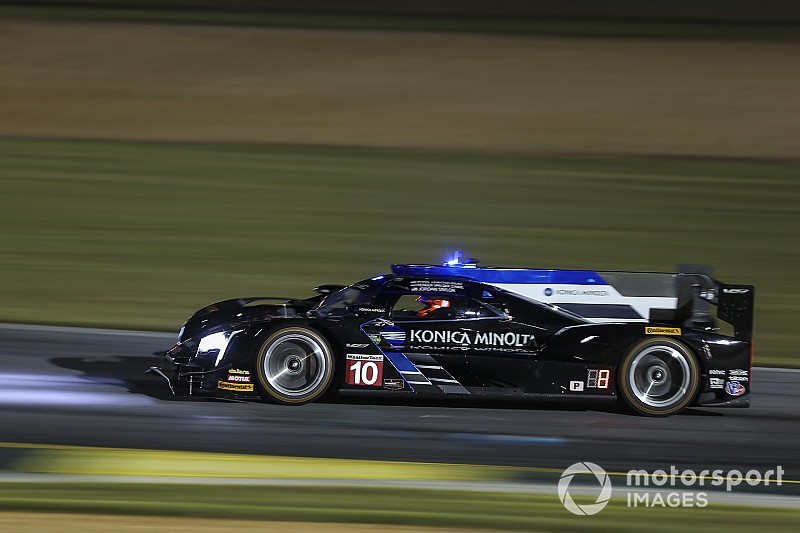 Van Der Zande worked hard to get himself up with the Acura Team Penske ARX-05 of Graham Rahal and Tristan Nunez in the #77 Mazda RT24-P and since Taylor has been in the car he has been able to pull away in the lead.

His closest pursuer was Helio Castroneves who took over from Rahal but passed under a yellow waved for GT car in the sandtrap, and was assessed a drive-through penalty.

That had left the highly impressive Felipe Nasr in second in the #31 Action Express Racing Cadillac [although he was the first of the leaders to stop], with Lucas di Grassi now at the wheel of the #77 Mazda thus promoted to second.

Timo Bernhard lies third, he and Pipo Derani having done a stellar job to keep ESM Nissan in the hunt, whereas Filipe Albuquerque in the #5 Cadillac is currently bottling up the recovered #55 Mazda which Spencer Pigot got back on the lead lap and in which Jonathan Bomarito has set some very strong lap times. He is also having to watch his mirrors as Romain Dumas in the CORE autosport Oreca is pushing hard.

Castroneves has fallen to seventh.

The yellow that flew for the spun Risi Competizione Ferrari 488 sent everyone to the pits, but on exit up the hill, Antonio Garcia spun to the inside wall, striking it hard enough to push the bumper onto his front wheels. That punctured at least one tire, and left him limping back to the pits where he went behind the wall and lost two laps.

That, combined with a drive-through penalty for Porsche’s Earl Bamber who nudged a GTD car off track, has promoted Richard Westbrook/Ryan Briscoe/Scott Dixon Ford GT into second place behind the other 911 of Frederic Makowiecki, and should they hold position, Westie and Briscoe will beat Garcia/Magnussen to the GTLM title.