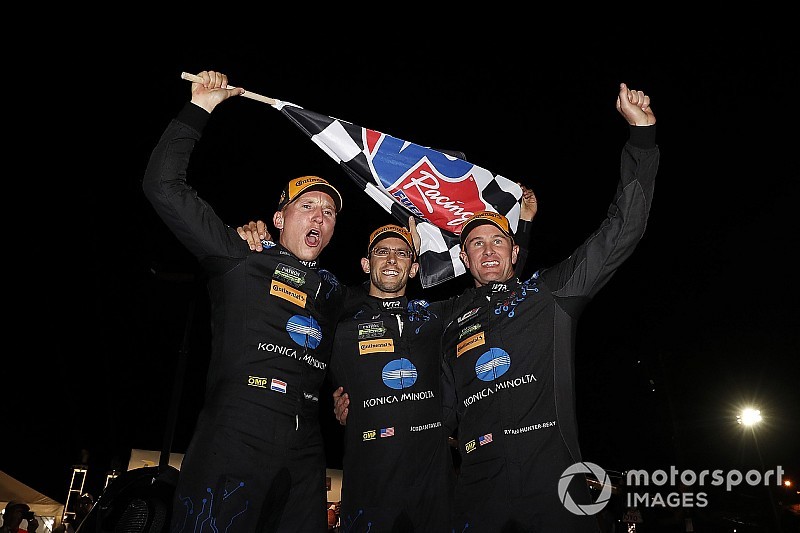 The final stops for several Prototype teams looked too far from the end to make it without a splash-and-dash, and so it proved.

ESM Nissan’s Pipo Derani vaulted into the lead on the penultimate stop, and even survived a stall after his final stop to retain the lead, but he was having to back-pedal on fuel and fell victim to Albuquerque in the closing stages before stopping for a splash and dash.

Van Der Zande, however, had stopped later than his rivals and kept the pressure on Albuquerque who gambled on staying out but had his Cadillac cough three corners from the end.

Thus Van Der Zande, who co-drove with Jordan Taylor and Ryan Hunter-Reay, dived past to snatch WTR’s first win of the season.

Such was Albuquerque’s fuel issues that the two Mazda RT24-Ps of Oliver Jarvis/Tristan Nunez/Lucas Di Grassi and Jonathan Bomarito/Spencer Pigot/Marino Franchitti swept past to claim a double podium – Mazda Team Joest’s best result of the year.

CORE autosport’s Colin Braun was another to have to make a late splash-and-dash, thereby losing out on the championship to the other AXR team of Felipe Nasr and Eric Curran, who shared with Gabby Chaves.

Remarkably, Antonio Garcia and Jan Magnussen became class champions despite never winning a race, despite finishing two laps down in the #3 corvette they shared with Marcel Fassler.

Ryan Briscoe/Richard Westbrook looked to be in the pound seats in second behind the Porsche 911 RSR of Nick Tandy, but Briscoe was passed out of the pits by the #4 Corvette of Oliver Gavin/Tommy Milner/Fassler and later fell behind the two BMW M8s and could only salvage fifth.

Tandy, Frederic Makowiecki and Patrick Pilet not only showed exceptional pace to deservedly take the class win, Tandy also showed an amazing ability to feather-foot on fuel despite stopping earlier than his competitors before the final stint and still win by 11sec over the #4 Corvette.

Daniel Serra, Cooper MacNeil and Gunnar Jeannette won their class in the WeatherTech Scuderia Corsa Ferrari 488 despite intense pressure from the Meyer Shank Racing Acura NSX of Alvaro Parente, Katherine Legge and Trent Hindman, who needed to win to have a real chance of GTD championship.

What put the kaibosh on that plan was a typically perfect drive by Bryan Sellers, along with Madison Snow and Corey Lewis in the Paul Miller Racing Lamborghini Huracan which came into this finale six points ahead of Legge and finished third to secure the title.

Robert Renauer had helped Patrick Long and Christina Nielsen take the lead, but got a drive-through penalty for punting the lead Ferrari, resulting in fourth place, with a late pass on Townsend Bell’s Scuderia Corsa Ferrari.

The Land Motorsport Audi R8 was sixth despite two punctures, otherwise it would likely have won, given the pace of Christopher Mies, Daniel Morad, Sheldon van der Linde throughout.