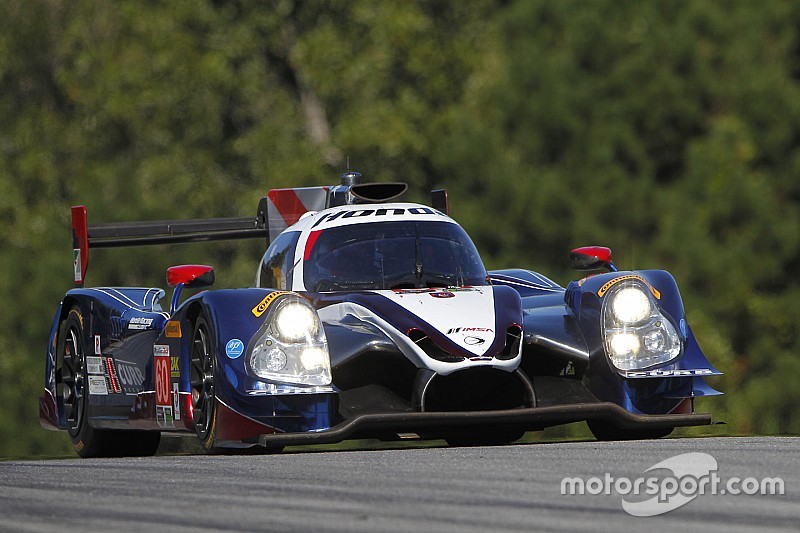 Qualifying for the IMSA WeatherTech SportsCar Championship's 2016 finale at Road Atlanta followed practice form in the Prototype category, but there were surprises in other classes.

To no one’s surprise, Olivier Pla delivered a knockout blow to the opposition on his fourth lap of the famously challenging 2.54-mile Road Atlanta course, to deliver pole for the Michael Shank Racing team. Wheeling the Ligier-Honda JS P2 around in 1min13.061sec, Pla, who will divide driving duties with Ozz Negri and John Pew tomorrow, outpaced Tristan Nunez’s #55 Mazda Prototype by 0.459sec.

A desperately tight three-way battle for supremacy saw PR1/Mathiasen Motorsports’ Robert Alon grab the final PC pole of the season by just 0.059sec ahead of Alex Popow of Starworks Motorsport and 0.084sec ahead of Johnny Mowlem of BAR1 Motorsports.

Kenton Koch was only a couple of tenths behind in fourth for Performance Tech Motorsports, while yesterday’s fast man, ex-IndyCar and GP2 driver Stefano Coletti was fifth, some 0.45sec off the pace in the second of the Starworks cars.

The two GTLM teams with the most to gain this weekend did everything required of them in qualifying, with Richard Westbrook putting the #67 Ford GT on class pole, with Antonio Garcia grabbing second in the #3 Corvette. Westbrook and Ryan Briscoe, who this weekend share their car with four-time IndyCar champion Scott Dixon, can still win the GTLM title should they win the race and the #4 Corvette of Oliver Gavin and Tommy Milner finishes outside the top seven. Meanwhile Garcia and Jan Magnussen, are desperately trying to beat the #67 Ford to make it a Corvette 1-2 in the points table, and Garcia wound up just 0.15sec off the class pole.

Given their practice pace, the Ferrari 488s disappointed slightly but only by fractions. Toni Vilander’s Risi Competizione entry was beaten to the front row by just 0.011sec, and Daniel Serra wound up fifth, despite being only half a tenth slower. In between them sat the second Ford GT, piloted by Joey Hand.

In P6, John Edwards was the faster of the two BMW M6 drivers in class, a quarter-second from pole, with Milner seventh followed by the two works Porsches split by the second M6.

Jeroen Bleekemolen delivered a somewhat surprising smackdown to his GTD rivals with a brilliant 1min21.305sec lap in the Riley Motorsports Dodge Viper that he shares with ViperExchange.com dealer Ben Keating full-time, and this weekend will also share with Marc Miller. His class pole time was 0.46sec faster than Matt McMurry in the Park Place Motorsports Porsche 911, who nonetheless did well to edge recognized Porsche ace Mario Farnbacher in the Alex Job Racing entry.

Fourth fastest was Christina Nielsen in Scuderia Corsa’s GT3 version of the Ferrari 488, while fifth and sixth were the Stevenson Motorsport Audi R8s of Lawson Aschenbach and Robin Liddell, respectively.

Madison Snow led the Lamborghini Huracan contingent in seventh, ahead of the similar Change Racing car of Corey Lewis, while Turner Motorsport’s Bret Curtis was ninth in the BMW M6.