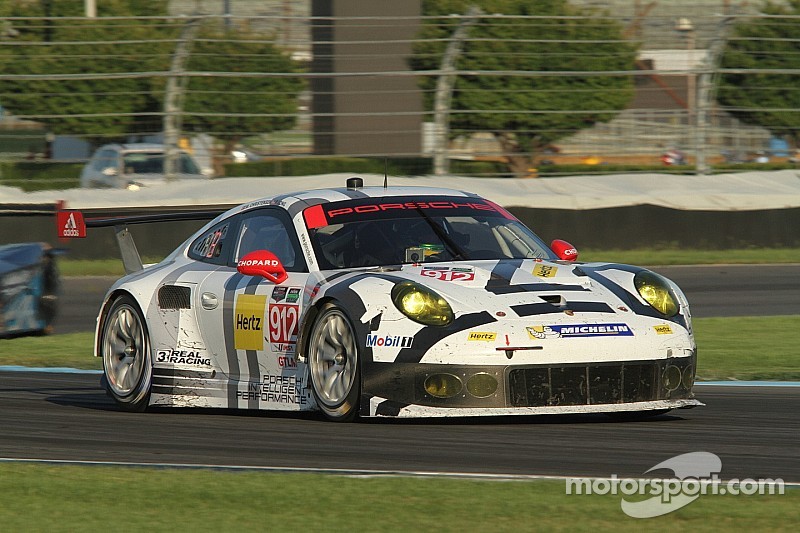 The race proved a strong testing environment for the team.

Stuttgart. Today’s Continental Tire Road Race Showcase at Road America was the first event for the new Adjustment of Performance (AoP) package for the Porsche 911 RSR. With no previous on-track testing time with the new Tudor United SportsCar Championship rules package, the works program earned a fifth-place finish in class. The race proved a strong testing environment for the team with significant balancing of the field being seen against most of the GT Le Mans (GTLM) class competition.

All three Porsche 911 RSRs entered at Elkhart Lake, Wisconsin raced in the top five during the two-hour, 45-minute event. Ultimately, the best finishing position was the No. 912 Porsche North America factory entry in fifth. Its No. 911 sister car finished tenth.

Porsche Motorsports entered the weekend with a steep learning curve. After winning the first two races of the season on high-speed, low-downforce tracks, the classic rear-engine Porsche struggled against its competition on tracks which demand high-downforce configurations. IMSA, the rules-maker for the Tudor United SportsCar Championship, sought to level the playing field against other cars in the production car-derived series which gains its core rules from the 24 Hours of Le Mans.

The team kept us right in with strategy and the speed of the car was good.

The current Adjustment of Performance allows the seventh-generation Porsche 911 a bigger front splitter, revised rear wing and larger air restrictor. Today’s eighth round of the championship was the first opportunity Porsche had to test the combination on-track. As a result, the weekend’s practice sessions, and even today’s race, was focused on learning the new performance characteristics of the car.

The No. 912 Porsche North America Porsche 911 RSR, driven by Patrick Long (USA) and Michael Christensen (Denmark), challenged late for a podium position but would eventually finish fifth. The team’s attempt at returning to victory lane was made all the more impressive after the car spun on the second lap of the race. Long and Christensen fought back to run as high as third with 20-minutes remaining. Despite a valiant effort, they were passed twice in the closing stages but held on for the top-five result.

The No. 911 Porsche North America Porsche 911 RSR also showed speed with Nick Tandy (Great Britain) and Richard Lietz (Austria). Despite starting back in the order, the Rolex 24 Hours at Daytona-winning team raced to the front of field leading near the race’s midpoint. However, a penalty for hitting a competitor’s wheel on their final pit stop forced them to return to pit lane to stop for 20 seconds in the “penalty box”. The team would finish tenth.

The No. 911 did win the “IMSA Green Challenge” for the most efficient run in today’s race. The award is given to the team that, in the simplest terms, is able to travel the furthest, the fastest on the least amount of fuel. Porsche previously won the award at the Rolex 24 At Daytona and the Mobil 1 Twelve Hours of Sebring.

Just ahead of the No. 911 in ninth-place was the sole customer-prepared Porsche 911 RSR in the class. The No. 17 Team Falken Tire Porsche 911 RSR jumped four spots on the car’s first pit stop to run second. However, after the impressive pit work and strong drives by both Porsche factory driver Wolf Henzler (Germany) and Bryan Sellers (USA), the privateer entrant fell to ninth in the factory program-heavy class at the finish.

Patrick Long (#912): “The car was really good at the start on cold tires. Early in the race we were pressuring Bill Auberlen in the BMW for third and it was side-by-side and I got put up over the curb. The team kept us right in with strategy and the speed of the car was good. We were able to battle back. We didn’t have the straight line speed today and we had to yield to the Viper in the end.“

Michael Christensen (#912): “I think we are faster in terms of lap time. The car has been optimized in terms of balance but there is still work to do. The many restarts during my stint were an opportunity for us to attack and to move forward. We were successful with that.”

Richard Lietz (#911): “The balance of the car was good in the race. We had the pace to follow the others. The negative is that I touched a Corvette’s tire leaving the pits. It was just a brush but it was enough to give the penalty. A penalty at the end of the race just puts you back and you have no chance to make it up. The car was good and I am looking forward to Virginia.”

Nick Tandy (#911): “The car was really good. We tried something a little bit different for the race and it seemed to work really well. I was able to get past the Viper to take the lead. It was a good race. We seem to be getting a better understanding to how the new package is working. That is a good step towards the future.”

The Alex Job Racing Porsche 911 GT America, with Cooper MacNeil (USA) and Leh Keen (USA) at the wheel, used the five yellow flags of the race to their advantage. The combination finished second in the GT Daytona (GTD) class, and move into first place in the points standings with only three events remaining. It was the pair’s first podium of 2014. Madison Snow (USA) and Jan Heylen (USA) matched their best finish of the season also by piloting the Snow Racing Porsche 911 GT America to a third-place finish.

The next Tudor United SportsCar Championship race will take place on August 24 on the Virginia International Raceway in Alton, Virginia, USA.