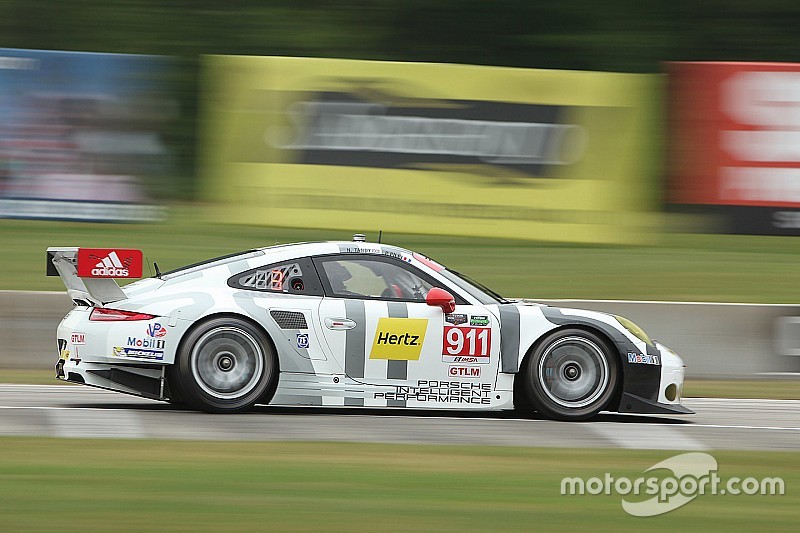 Nick Tandy and co-driver Patrick Pilet proved at the last race, at Road America in Wisconsin, that it really doesn’t matter where their No. 911 Porsche North America 911 RSR starts. After the engine sputtered during practice, the team changed it before the race, and the rules say that if you change the engine, you start in the rear.

So they did, and drove to the front, taking the GT Le Mans class win, followed by their teammates, Jorg Bergmeister and Earl Bamber, in the No. 912 Porsche.

Sunday, Tandy and Pilet start where they finished the last race – up front. Tandy qualified the No. 911 on the pole for the Oak Tree Grand Prix at Virginia International Raceway. The duo will be looking for their third straight TUDOR United SportsCar Championship victory, since they won at Canadian Tire Motorsport Park, which was the race before Road America.

Tandy, who also qualified on the pole at Canadian Tire Motorsport Park, said given a choice, he’d definitely prefer starting up front. “It does make the start much simpler,” he said. “You can dictate where you start the race. Theoretically, it will make for a simpler race than last time, although that was quite a good one.”

Since the GT Le Mans class, along with the GT Daytona cars, is the featured class this weekend since the Prototype and Prototype Challenge cars are taking the weekend off, it will give Tandy a chance to race for the overall win. The last time he did that was in the spring – when he was on the winning Porsche team at the 24 Hours of Le Mans.

“It means a lot,” he said, “when the checkered flag falls on your car,” instead of on the faster Prototype cars in front of you.

Also helpful: The second-quickest qualifier was the No. 912 team Porsche, driven by Jorg Bergmeister and Earl Bamber. Tandy’s best lap was 1 minute, 42.532 seconds, while Bergmeister was right behind him with a lap of 1:42.629. Third was the No. 62 Risi Competizione Ferrari F458 Italia of Giancarlo Fisichella and Pierre Kaffer, with a lap of 1:43.122.

Despite the speed of his Porsche, Tandy is cautionary. “This is Saturday. On Sunday, it could be a different story.”

In the GT Daytona class, Dion von Moltke scored his third pole of the year in the No. 48 Paul Miller Racing Audi R8 LMS he shares with Christopher Haase. The team has run well all season, and is in contention for the points championship, but they are still chasing their first win of the year. Von Moltke said getting a win is important, but they’ll have to play Sunday’s race strategy with points in mind. “We’ll see if we can really fight for the win,” he said, “or focus on the championship.”

It is expected to be sunny and hot on Sunday, much like the conditions during Saturday qualifying. The hot track slowed lap times compared to practice earlier in cooler weather, “and it was really, really greasy out there,” von Moltke said.

Von Moltke’s fastest lap was 1:49.255, with Patrick Lindsey a close second with a lap of 1:49.265. Lindsey drives the No. 73 Park Place Porsche 911 GT America, with co-driver Spencer Pumpelly, who won the ST class race earlier in the day in the Continental Tire SportsCar Challenge. Third behind the Park Place car was the No. 63 Scuderia Corsa Ferrari 458 Italia of Bill Sweedler and Townsend Bell, with a lap of 1:49.512.

The only incident during qualifying was a brief off-track excursion by GT Daytona points leader Christina Nielsen in the No. 007 TRG-AMR Aston Martin Vantage V12. Damage was minor, and she had qualified fifth fastest before her spin.

The Oak Tree Grand Prix at VIR, Round 10 of the TUDOR Championship, takes the green flag at 1:05 p.m. ET. Live coverage on FOX Sports 1 begins at 1 p.m. IMSA.com and the IMSA mobile app will have live streaming, live timing and scoring, and IMSA Radio’s play-by-play.

Jan Magnussen: Our title race is heading to the wire