A look at the GT winners and losers of this year's Rolex 24.

The winning Porsche finished sixth overall and 2.838 seconds ahead of the No. 55 BMW Z4 GTE shared by Bill Auberlen, Andy Priaulx, Joey Hand, and Maxime Martin.

Hand appeared to be catching Pilet after the race’s final restart, but the BMW driver scraped the wall at the exit of the infield on the penultimate lap. The scrape interrupted his momentum and relegated him to second, as he was never able to catch back up to Pilet.

“I could see (hand) behind me,” explained Pilet. “I had to push completely. I went flat out and took a lot more risk. I was lucky also in the traffic. I created a small gap and it was enough to win.” 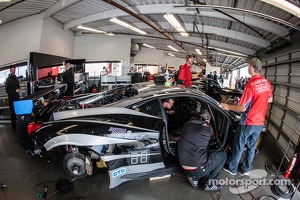 The top two finishers in GT LM managed to avoid the bevy of problems that struck the third-place finishing SRT Viper GTS-R (and the other Viper in the class) and just about every one of the other cars in the class, including the new Corvette C7Rs and the two Ferrari F458 Italias. The problems with these cars started early, when the No. 62 Ferrari was almost completely destroyed when it was struck at high-speed by Memo Gidley’s prototype. Matteo Malucelli, who was behind the wheel of the Ferrari at the time of the crash, was taken to a local hospital and still being evaluated by doctors at the race’s conclusion. Gidley had had surgery on his left arm and left leg and an unstable back fracture that will also require surgery.

The other Ferrari in the GT LM class – fielded by Krohn Racing – hit a GT Daytona car during the 11th hour, causing damage to the car’s left front, upper suspension, which had to be replaced.

The pair of Vipers in the class took turns leading during the early hours, but power steering issues and some crash damage took both of them out of contention for the win. The class pole sitting Viper of Marc Goosens, Dominik Farnbacher, and Ryan Hunter-Ray did manage to hang on to claim third in class, albeit four laps behind the winning Porsche.

Both new C7.R Corvettes also ran into problems. The No. 3 entry, shared by Jan Magnussen, Antonio Garcia, and Ryan Briscoe, failed to finish due to radiator and overheating issues. The other C7.R started smoking during the 21st hour, while running second. Tommy Milner immediately drove the car to the garage with transmission problems. It finished fifth in class.

The No. 912 Porsche 911 RSR failed to finish because of engine failure. And the No. 56 BMW Z4 GTE suffered a right-rear wheel bearing failure, which forced the team to change the rear upright on the car. The car went on to finish fourth in class.

Allessandro Pier Guidi and Marcel Winkelhock raced side-by-side on the race’s final lap for the GT Daytona class win. Pier Guidi, driving the Level 5 Motorsport Ferrari 458 Italia, held the lead at the final restart. But Winkelhock worked his way to Pier Guidi’s back bumper on the final lap. Winkelhock attempted to pass Pier Guidi in the “kink” between the two horseshoe portions of the Daytona infield road course. The cars did not touch, but Winkelhock had to take to the grass at the outside of the turn to avoid crashing.

Pier Guide retained the lead as Winkelhock plowed through the grass to rejoin the race. Tudor Championship officials deemed this incident avoidable contact and penalized Pier Guidi a stop-and-go plus 70 second penalty. The penalty handed the win to Winkelhock and his Flying Lizard teammates Nelson Canache, Jr., Spencer Pumpelly, and Tim Pappas.

“It was an incredible last lap,” explained Winkelhock. “I left (Pier Guidi) plenty of space to turn-in in the kink and at the exit of the corner he tried to push me into the grass. He didn’t leave me enough space so I went off (the track). I think that’s not the way to win a race. So I think (the penalty) is a fair decision. And I’m absolutely happy.

“I remember last year we were fight for the victory and out of the bus stop chicane we ran out of fuel. So for me it’s nice to back this year and winning the race.”

Pier Guidi was relegated to fourth. The team’s appeals to overturn the penalty seemed to have not persuaded race officials to rescind the penalty.