Porsche will find itself in a "bad situation" if forecast rain for this weekend's Sebring 12 Hours arrives, fears Frederic Makowiecki.

The German manufacturer's challenge in January's IMSA season-opening Rolex 24 at Daytona fell apart when heavy rain hit the track in the latter stages, with Makowiecki getting tangled up with the Ford GT of Joey Hand at one particularly chaotic restart.

That ruled out the #911 Porsche 911 RSR from the lead fight, while the sister #912 machine was delayed by a late spin for Earl Bamber and finished third in the GT Le Mans division.

With more rain currently forecast for Saturday's second round of the championship, Makowiecki offered a bleak assessment of Porsche's chances if such conditions arise again.

"To be honest, if it rains, we are not in a good position," the Frenchman, who shares the #911 car with Nick Tandy and Patrick Pilet, told Motorsport.com.

"We struggled to understand what happened [in Daytona], the car is f***ing tricky to drive, we kept aquaplaning like hell.

"We need to understand because if it rains… we mustn’t be negative, but if we get the conditions of Daytona, we are in a bad situation."

Tandy gave a more nuanced view of Porsche's chances in wet conditions, saying the 911 RSR's Daytona woes may have been track-specific.

He explained: "I think a lot of Daytona came down to the fact we were quick in the dry because we were the lowest on downforce on the cars, but that hurts when it rains.

"I’m kind of hoping the weather performance was more down to the Daytona set-up than anything inherent in the way the car is working."

Tandy added that another key factor to success in the rain is how each GTLM car gels with new-for-2019 IMSA supplier Michelin's standard wet tire.

"The thing is now, we run a spec wet tire, like a customer wet tire, exactly the same tire as GTD runs," he said.

"Everyone’s got the same tire, it’s just how the car reacts to track conditions, how your set-up is to deal with that." 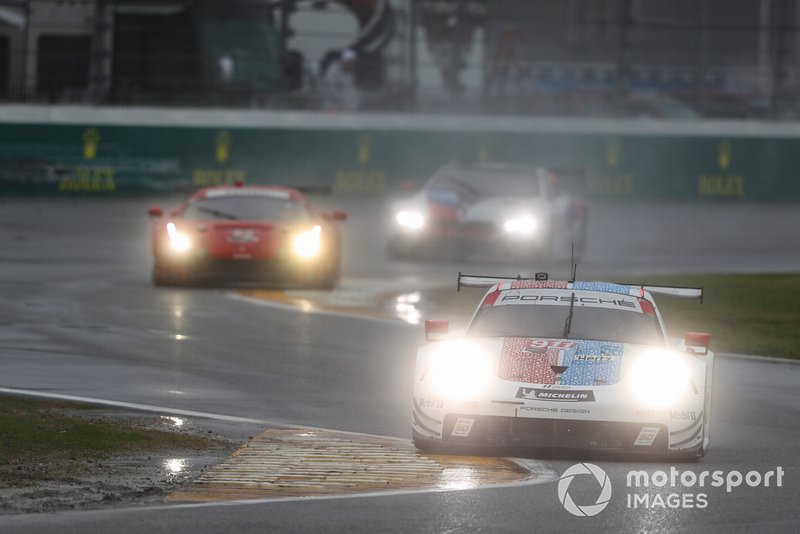 Tandy “very sad” in Sebring glory as Porsche signs off