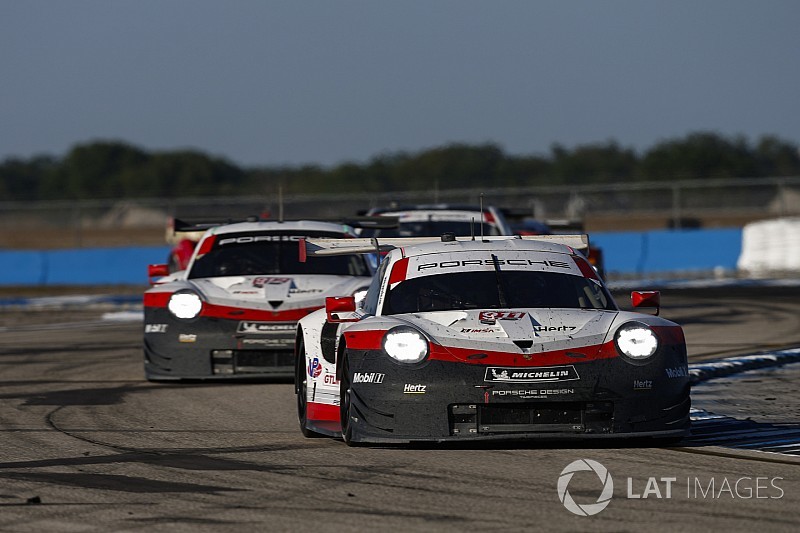 Pascal Zurlinden, Porsche’s director of GT factory motorsports said that Sebring 12 Hours victory in GTLM was down to a faultless run by the drivers and the team with a car that was “not the fastest over a lap.”

Nick Tandy, Patrick Pilet and Frederic Makowiecki clinched the win just 6.2sec ahead of one of the BMW M8s, while Earl Bamber, Laurens Vanthoor and Gianmaria Bruni overcame an off-track excursion to take third.

Porsche, which has 18 outright victories at Sebring Raceway as well as 71 calss wins, saw Vanthoor’s #912 Porsche 911 RSR hit the front of the class, while Makowiecki would later lead the race in the #911 car for two hours.

With less than two hours to go, Patrick Pilet pitted from the lead and Tandy drove the final stints, dueling with Alexander Sims in the BMW until breaking his challenge and pulling away.

Meanwhile Bruni, who’d caused a yellow flag by tearing off his rear diffuser and rear valance by straddling a curb, had his car quickly repaired and he and his co-drivers inched back up the leaderboard to reach the top three.

“It’s a great achievement to score two podium spots at Sebring,” said Zurlinen. “The secret was our consistency and the fact that we didn’t make one mistake. We may not have been the fastest over a lap, but over the distance the drivers and the entire team put in a perfect performance.

“Even when we had to repair the #912 car in the pits, we pulled out all stops to get the car back up the front. Today was a great day for Porsche.”

Pilet agreed with his boss’s assessment, saying: “The pit crew didn’t make one mistake and our strategy was perfect. To celebrate this achievement with my friends Nick and Fred is incredible. After the qualifying, victory seemed a long way off. But when you’re determined to achieve something and you go for it, you can do it. This race is proof of that.”

Tandy added: “They say that the best victories come from the toughest races. Today was such a race. We didn’t have the slightest problem over the entire distance and that was the key to our success.

“My last two stints were incredibly intense, especially the duels with the [Risi Competizione] Ferrari and the BMW. We switched to new tires during the last pit stop – after that, nothing could hold us back.”

“That was one of my greatest successes,” said Makowiecki. “Sebring is my all-time favorite race in the USA and we knew that we’d only have a chance if we as a team didn’t make any mistakes. It was a really tough race, but that makes this victory all the more special.”

Canadian Notebook - Highs and lows for Canadians at Sebring