Saturday’s race serves as both the second round of the TUDOR Championship and the Tequila Patrón North American Endurance Cup.

SEBRING, Fla. – Michael Christensen may not yet be a household name among U.S. sports car fans, but the 23-year-old Dane fully intends on changing that this season with a full-time TUDOR United SportsCar Championship ride for Porsche North America.

If Friday’s qualifying for the Mobil 1 Twelve Hours of Sebring Fueled by Fresh From Florida is any indication, he’s not wasting any time, setting the fastest time in his No. 912 Porsche 911 RSR with a lap of one minute, 58.933 seconds (113.207 mph) in the always-competitive GT Le Mans (GTLM) class. 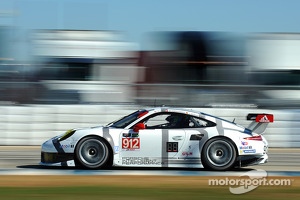 Saturday’s race serves as both the second round of the TUDOR Championship and the Tequila Patrón North American Endurance Cup. The event begins at 10:15 a.m. ET. Live FOX Sports 1 coverage runs from 10 a.m.-1 p.m., with the remainder of the event streamed live on www.imsa.com. FOX Sports 1 also will air a three-hour highlight telecast beginning at 8:30 a.m. Sunday.

It was Christensen’s first qualifying attempt as a Porsche factory driver after being named to the manufacturer’s prestigious lineup in November.

“It’s the first time for me here (at Sebring) and the first time on the pole,” Christensen said. “We just need to drive as hard as possible. When the class is close like this, it’s going to be a long, long race. You have to keep a cool head as a driver and work well as a team over the wall.”

Porsche North America is off to a hot start in 2014 after winning the season-opening Rolex 24 At Daytona with the team’s No. 911 911 RSR, but if it wants to close out the prestigious Daytona-Sebring double, it will have to fend off tough competition from BMW and Chevrolet.

Corvette Racing took the next two positions, followed by the Daytona-winning Porsche and the Risi Competizione Ferrari as the top six positions were separated by a mere 0.315 seconds.

While the No. 62 Ferrari 458 Italia was fastest in Thursday’s practice, the car was involved in a Friday morning incident. The team was able to repair the vehicle in time for qualifying, with Gianmaria Bruni clocking in seventh fastest with a lap of 1:59.890 (112.303 mph) in the car he co-drives with Matteo Malucelli and Giancarlo Fisichella.


Prior to the merger between the GRAND-AM Rolex Series and the American Le Mans Series presented by Tequila Patrón, Dane Cameron had a presence in both of the series that now make up the unified TUDOR United SportsCar Championship. He earned a reputation as a top qualifier in the prototype ranks of both series, earning two Rolex Series DP-class poles and three ALMS PC-class poles.

Friday, Cameron used that experience in the TUDOR Championship’s production-based GT Daytona (GTD) ranks, earning the TOTAL Pole Award for Saturday’s Twelve Hours of Sebring, driving the No. 94 BMW Z4 for Turner Motorsport to a lap of 2:04.258 seconds (108.355 mph).

“It’s an amazing pole for an amazing event,” Cameron said. “I just glanced at the time sheets and the top six or seven cars are within a second of each other. It shows you won’t be able to give up any time on the track or the pit lane.”