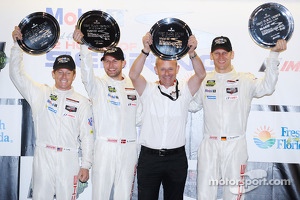 Led by sound pit strategy and an impressive final stint by factory driver Joerg Bergmeister, the No. 912 Porsche North America Porsche 911 RSR crossed the line 5.296 seconds ahead of No. 93 SRT Motorsports driver Jonathan Bomarito in the GT Le Mans (GTLM) class to remain undefeated in its debut factory season, run in conjunction with CORE autosport.

Patrick Long and Michael Christensen joined Bergmeister in the victory. Wins in the season-opening Rolex 24 At Daytona with the team’s No. 911 Porsche 911 RSR and Sebring give Porsche North America victories in two of the TUDOR United SportsCar Championship’s premier events and the first two races in the Tequila Patrón North American Endurance Cup.

“We were really fast all day, but we knew if we got in a different strategy the other guys would have to make their last pits and we could use that to our advantage,” Long said. “We got the final yellow which let us separate from the pack and then we could just play smart.”

The GTLM race heated up in the final hour. Jonathan Bomarito’s SRT Viper GTS-R held a two-second lead over Bergmeister and Oliver Gavin in the No. 4 Corvette Racing Corvette C7.R when Gavin suddenly spun with 55 minutes remaining.

At the same time the No. 31 Corvette DP of Eric Curran stopped on the track with no power. Anticipating a full-course caution, the No. 912 team called Long onto pit road for the final pit stop and driver change of the event. The yellow flag flew shortly after and when pit stops cycled through, Long’s co-driver Bergmeister found himself in the lead.

“The stint was very exciting,” Bergmeister said. “The team made a very smart move, we came in very early and as soon as the yellow came out I had a nice cushion of cars between me and the Viper. I tried to relax and told myself just don’t mess it up. ”

The late-race spin was followed by fuel pick-up issues for Gavin who wound up finishing sixth alongside co-drivers Tommy Milner and Robin Liddell. That sixth-place result and the win by the No. 912 Porsche 911 RSR led to a tie in the Patrón Endurance Cup points at Sebring, giving the No. 912 team the Round 2 win.

Bomarito and his No. 93 SRT Viper GTS-R co-drivers Kuno Wittmer and Robert Bell settled for second while the No. 55 BMW Team RLL BMW Z4 GTE of Bill Auberlen, Andy Priaulx and Joey Hand rounded out the podium. Krohn Racing was the last car on the GTLM lead lap, with Tracy Krohn, Nic Jonsson and Andrea Bertolini finishing fourth in the No. 57 Ferrari F458 Italia.

In its first event of the season the No. 17 Porsche 911 RSR of Team Falken Tire finished fifth driven by Wolf Henzler, Bryan Sellers and Marco Holzer.

Andy Lally was in the right spot at the right time and his No. 44 Porsche 911 GT America team made the right call to help give Magnus Racing the GT Daytona (GTD) class win Saturday in the Mobil 1 Twelve Hours of Sebring Fueled by Fresh From Florida. 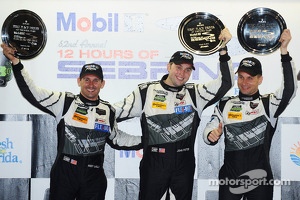 Running in the top three with just under one hour remaining, Lally was coming off the 17th and final turn at Sebring International Raceway when he was ordered to pit road. Lally did just that, barely beating the yellow flag that ultimately positioned him into the lead when pit stops cycled through. That was all he needed to hold on for the victory for he and co-drivers John Potter and Marco Seefried in Round 2 of the TUDOR United SportsCar Championship and Tequila Patrón North American Endurance Cup.

“We didn’t have it dead away on pace, but we had the right strategy that put us up front,” Lally said. “We had a day moving forward and back moving through the pack, but we were so well- handled by the Magnus Racing crew. This Magnus crew is absolutely the best team.”

One of the GTD-class teams that had to pit under the caution was the No. 555 Ferrari 458 of AIM Autosport. The team finished second in its first event of the season and was able to win the Sebring round of the Tequila Patrón North American Endurance Cup by leading in the race’s second segment and finishing second at the conclusion of the event.

While under a different team name, the No. 555 was driven by Rolex 24 winning drivers Bill Sweedler, Townsend Bell and Jeff Segal, as well as co-driver for Sebring, Maurizio Mediani. The trio of Sweedler, Bell and Segal lead the driver standings in the Patrón Endurance Cup.

“We’re looking forward to Watkins Glen,” said Sweedler. “AIM has been amazing. To be second, and to be a second behind the win, is really awesome.”

Rounding out the top five was the Audi R8 LMS from Flying Lizard Motorsports. That entry was driven by Seth Neiman, Dion von Moltke and Filipe Albuquerque.

During the race, IMSA officials utilized in-car camera footage to review separate incidents attributed to the No. 22 GTD car and the No. 911 GTLM car, resulting in penalties. “We believed this footage provided conclusive evidence of each car’s involvement in incidents,” said Scot Elkins, IMSA vice president, competition and technical regulations. “However, after the penalties were applied, we learned that the footage reviewed was taken from the wrong in-car cameras, as multiple cars were utilizing the same radio frequency. This was a unique situation, but we are unable to retract the penalties once served (stop plus time added). We will review our process and do what’s necessary to ensure such a situation does not occur again.”