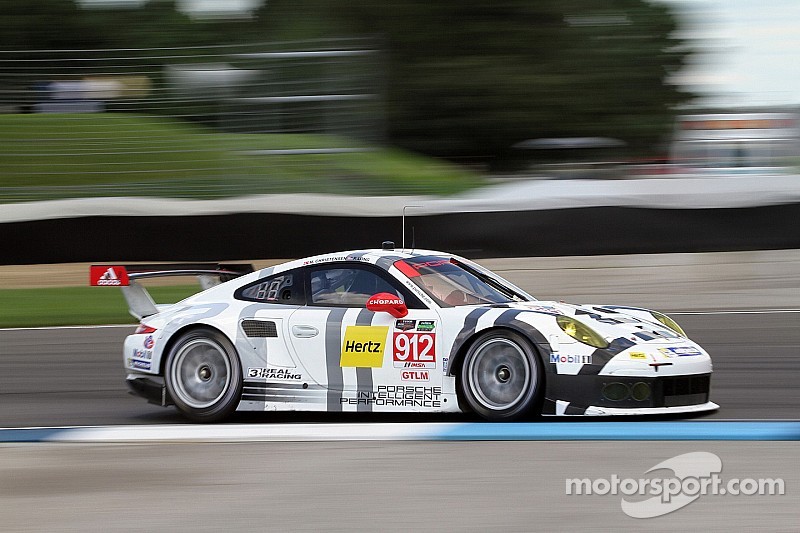 Stutgart - Porsche North America took advantage of the high-speed layout of the Indianapolis Motor Speedway road course to capture a podium finish in the Brickyard Grand Prix on Friday. The No. 912 Porsche North America Porsche 911 RSR finished in third-place in the highly competitive GT Le Mans class of the TUDOR United SportsCar Championship. The team used all of its assets, including several early caution periods and expert pit work, to earn the its highest finish since winning the Twelve Hours of Sebring in March.

The long, high-speed straightaways which have become so ingrained in the consciousness of the public through the Indianapolis 500, proved an equally good match to the Porsche 911 RSR. With an aerodynamic setup developed for the faster tracks of the Sports Car World Endurance Championship WEC, which leaves the cars at a disadvantage on racecourses requiring high downforce – such as the most recent rounds of Mazda Raceway Laguna Seca, Watkins Glen International and Canadian Tire Motorsports Park – The Brickyard’s mixture of oval and infield road course provided the Porsche a respite under its current aero setup. All three of the Porsche 911 RSRs entered in the race took full advantage of this, challenging for top-five positions during the race.

The No. 912 Porsche North America Porsche 911 RSR shared by American Patrick Long and Michael Christensen (Denmark) maximized the potential of the car finishing third. The team played its pit strategy to precision using early race caution periods to move the production car-based racer into striking distance of second-place late in the event.

The race was the most bittersweet for the No. 911 Porsche North America Porsche 911 RSR. The entry driven by Richard Lietz (Austria) and Nick Tandy (Great Britain) suffered an engine failure when in the lead of the GTLM class. Tandy had two strong restarts to move from sixth to second, and then into the lead early in the second hour of the race. However, telemetry recognized an engine issue and the team retired the car with 55 minutes remaining in the twohour, 45-minute race.

The Team Falken Tire Porsche 911 RSR of Wolf Henzler (Germany) and Bryan Sellers (USA) ran well before an extended stop to make repairs. After running in the top-five, the only customer team in North America to race Porsche’s most advanced 911 finished ninth.

Patrick Long (#912): “The last few races have been ones to forget and this is the best way to do that. I’ve had wins that didn’t feel this good. It is a short celebration and then heads down for Road America. The team showed tremendous persistence and they had great pit stops. We executed today. We made no mistakes and that is reminiscent of Sebring which was the last time we were up on the podium. I hope we build off of this.“

Michael Christensen (#912): “The car was quite good. The first stint was mostly to get around the track with no damage. The restarts were taking place quite early on the straights so we had to stay tight but the biggest challenge was traffic. It is a relief to get back on the podium for the first time since Sebring. We have been working very hard.”

Richard Lietz (#911): “This track suits our car perfectly. We do not have enough downforce, which means we do not have a lot of drag so we are quick on the straight. We showed in the race that we had the pace to be on the podium here. It is a little frustrating for us but at least one Porsche is on the podium.”
Nick Tandy (#911): “The car was very good. We made a lot of ground in traffic and on the start, and restarts. The race was going perfectly. We had a great pit stop, we gained positions and time. Then we recognized an engine issue and we could not continue.”

In the GTD class, the two Alex Job Racing Porsche 911 GT America racecars, the No. 22 entry driven by Leh Keen (USA) and Cooper MacNeil (USA) and the No. 23 Porsche of Mario Farnbacher (Germany) and Ian James (USA) were fifth and sixth respectively. Patrick Dempsey (USA) and Andrew Davis (USA) finished ninth in their Dempsey Racing Porsche 911 GT America. Dempsey drove the first stint, and brought the car into the pits in a top five position, one of his best stints of the year.

The next Tudor United SportsCar Championship race will take place on August 10 on the Road America circuit in Elkhart Lake, Wisconsin, USA.

Promising start fades to fifth and seventh for Extreme Speed