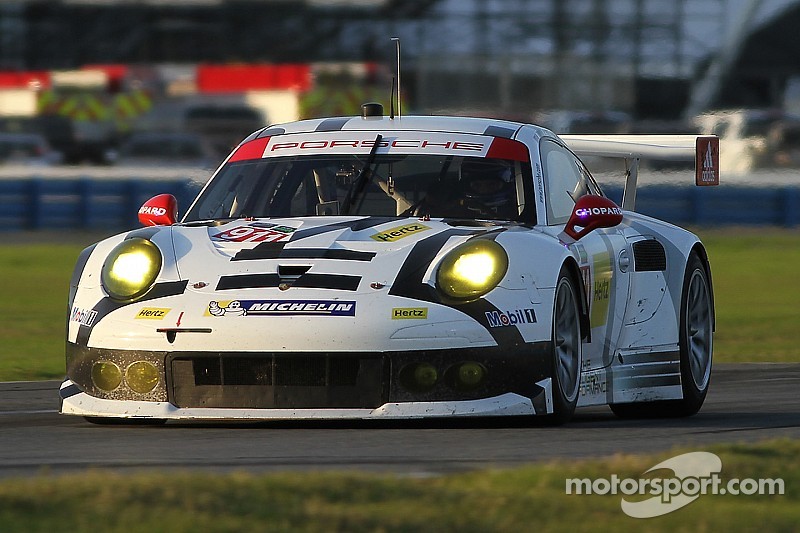 Eight factory drivers at the wheel of the Porsche 911 RSR travels to Florida as the defending champions to contest the second season of this popular race series.

Stuttgart – As the most successful manufacturer in the history of the 24 Hours of Daytona, Porsche heads to the 53rd edition of the sports car classic on 24 January with a large contingent. No less than eight factory drivers tackle the Daytona International Speedway at the wheel of the Porsche 911 RSR.

This race also marks the start of the Tudor United SportsCar Championship season. The Porsche North America works squad travels to Florida as the defending champions to contest the second season of this popular race series. Porsche’s record at Daytona includes 22 overall and 76 class victories.

Aside from Le Mans, the 24 hour race at Daytona is the second greatest long distance classic in international motor racing. The race is contested on the 5.729 kilometre Daytona International Speedway, one of the most famous race tracks in the world. Created from a combination of the original oval and the infield, the circuit features twelve corners, two of them banked.

For the Porsche North America factory squad, which fields a pair of Porsche 911 RSR in the GTLM class at Daytona and in other rounds of the Tudor United SportsCar Championship, Porsche works drivers Nick Tandy (Great Britain), Patrick Pilet (France) and Marc Lieb (Germany) share the cockpit of the vehicle with the starting number 911. Their factory pilot colleagues Jörg Bergmeister (Germany), Earl Bamber (New Zealand) and Frédéric Makowiecki (France) tackle the most famous endurance race in the USA at the wheel of the number 912 Porsche.

The Porsche 911 RSR and the Porsche 911 GT America run in the Tudor United SportsCar Championship which includes the 24 Hours of Daytona. Both are based on the seventh generation of the iconic 911 sports car. As the successor to the winning 911 GT3 RSR, the 470 hp 911 RSR celebrated its race debut in 2013 with a brilliant double victory at the Le Mans 24 Hours and last year won the three most prestigious sports car races in the USA: the 24 Hours of Daytona, the Sebring 12 Hours and Petit Le Mans.

The Porsche 911 GT America was built specifically for the GTD class of the Tudor United SportsCar Championship and was campaigned for the first time in 2014. The vehicle is a modified version of the Porsche 911 GT3 Cup, the most successful and most produced race car in the world.

Porsche has celebrated many great victories at Daytona. The first outright victory went to Vic Elford, Jochen Neerpasch, Rolf Stommelen, Jo Siffert and Hans Herrmann in 1968 with the Porsche 907. The most recent overall win in 2010 went to Joao Barbosa, Terry Borcheller, Ryan Dalziel and Mike Rockenfeller with the Porsche-Riley. In the traditionally very competitive GT classes, Porsche has notched up a record 76 wins. 2014 yielded the most recent victory with Richard Lietz, Nick Tandy and Patrick Pilet clinching GTLM class honours.

Dr. Frank-Steffen Walliser, Head of Porsche Motorsport: “The Daytona race is a sports car classic with fans all over the world. Porsche has celebrated some of its greatest victories at this famous race. To continue this streak of unforgettable successes is truly motivating for our drivers and teams.”
Jens Walther, President/CEO Porsche Motorsport North America: “The 24 Hours of Daytona is the longest and most traditional sports car race in North America. It’s a real classic that lures many of the world’s best race car drivers to Florida every year.”

Marc Lieb (911 RSR #911): “This classic is an excellent start to the new season. We have a good car and a good team and, if everything runs according to plan, we should be in a position to go for victory.”
Frédéric Makowiecki (911 RSR #912): “Our lap times at the Daytona pre-season tests have underlined that we’re definitely competitive. If we want to deliver this performance over the entire distance we need to work perfectly as a team over 24 hours. Then we have a chance to win.”

Jörg Bergmeister (911 RSR #912): “This race is a real challenge. I’m contesting the entire Tudor United SportsCar Championship season in 2015, so a good result in Daytona is critical if you want to stay in the running for the title.”

Earl Bamber (911 RSR #912): “To contest my first race as a Porsche works driver in Daytona is brilliant. It’s a dream come true.”

Wolf Henzler (911 RSR #17): “This is the first time that my Falken Tire team competes at Daytona. It’s a huge challenge because this track puts additional stresses on the tyres, especially in the two banked curves. I actually think we might be good for a surprise.”

Patrick Long (911 RSR #17): “The more often you contest this race, the better you understand what really matters: Don’t try to make up positions in every corner, but instead pull back sometimes and conserve the car. Then shortly before the finish you’re ready and in a good position to fight for victory.”