Porsche clocked 1317 miles, “ticked all the boxes” at Daytona 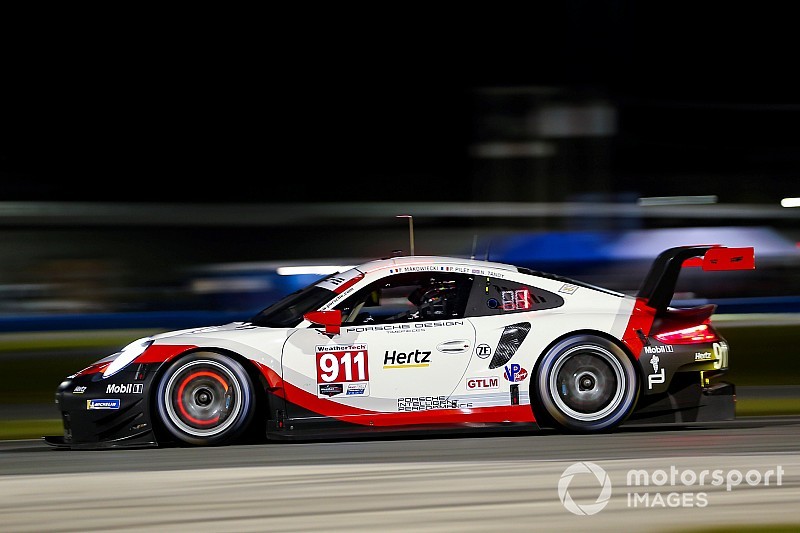 Porsche has revealed that over 1300 miles turned in varying conditions during the Roar Before the Rolex 24 at Daytona ensured it covered all items on its test list, ahead of this month’s IMSA WeatherTech SportsCar Championship season-opener.

The three-day test saw conditions that swung between a sunny 80degF to overcast and dark 60degF, with even a touch of rain. While teams in the other three classes in the series were having to deal with the switch from Continental tires to Michelin as official tire supplier, even the GT Le Mans class – already Michelin users across the board despite tire choice remaining open – will be using a new compound in 2019.

Thus all teams, including Porsche, were gathering data on the company’s latest rubber and how it behaves around the 3.56-mile Daytona road course.

Pascal Zurlinden, Porsche’s director of GT Factory Motorsport, declared afterward: "That was a successful test. We're very familiar with the car, it's the third outing at Daytona for the latest 911 RSR.

“The tires are new for us this year. The IMSA series has now adopted the tires from the WEC. This, of course, requires some adjustments.

“We managed to tick all the boxes on our test list. We experienced rain, sunshine, high and low temperatures – you can't have it better than that for a test."

Patrick Pilet, who will share the #911 Porsche with Nick Tandy for the full IMSA season along with Frederic Makowiecki at Daytona, Sebring and Petit Le Mans, said the team had focused on finding the best compromise between terminal speed and aero grip for the corners.

"Testing at Daytona is always extremely important because the racetrack has unusual characteristics,” commented the Frenchman who, together with Tandy and Makowiecki, won the Sebring 12 Hours and Petit Le Mans last year.

“It's important to have the best possible top speed on the oval, but without being hampered too much by insufficient downforce in the infield. These test days were extremely important for this setup work.

“Our car made a great impression on me. We were fast and very consistent, and so we're well prepared for the race weekend."

Testing duties in the #912 machine were the responsibility of just two drivers – IMSA fulltimer Earl Bamber and new Daytona/Sebring/Petit Le Mans third man Mathieu Jaminet. This was because the car’s other fulltimer, Laurens Vanthoor, was absent due to the birth of his first child.

Said Jaminet: “I drove the 911 RSR at the end of the 2018 season [subbing for Gianmaria Bruni at Petit, as the Italian was racing in the WEC’s Fuji round], but the car is still pretty new for me.

“For this reason the emphasis over these test days was to continue familiarizing myself with the car and the racetrack. Everything went really well.

“The car handles the different sectors very well and our pace was also first-class over longer distances.”