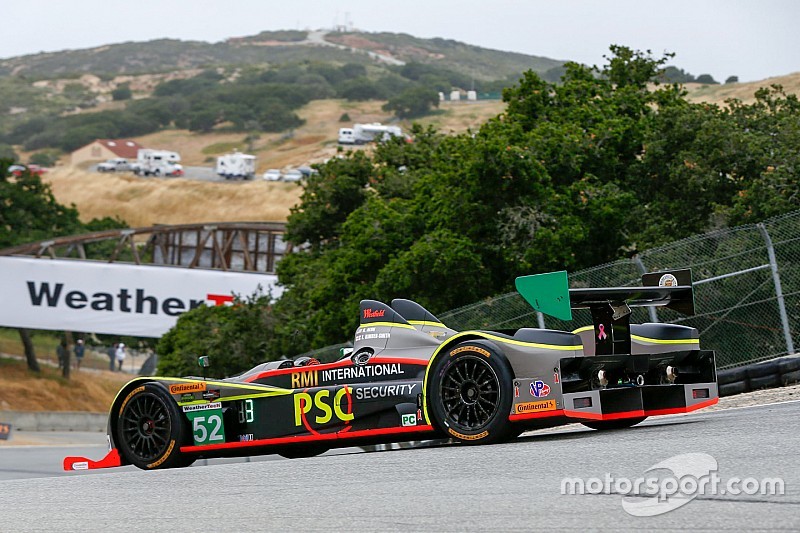 Tom Kimber-Smith and Robert Alon took victory by 1.7sec but only after holding off a strong late challenge from flying Dutchman Renger Van Der Zande in the Starworks Motorsports machine he shares with Alex Popow.

After taking over from Alon during a pitstop that came during a full-course caution, Kimber-Smith passed van der Zande for the lead and swiftly pulled 3.5sec on his pursuers while Stephen Simpson’s JDC-Miller car also deposed van der Zande. But with 29mins to go, the Starworks machine was back ahead, and started closing in on Kimber-Smith.

Just 20 minutes later, the pair were side-by-side as they got embroiled in GT Daytona traffic, but over the closing laps, Kimber-Smith reasserted himself to clinch victory at the famed 2.238-mile course in Steinbeck country.

Third was some reward for CORE autosport but it was maybe less than Jon Bennett and particularly Colin Braun deserved, after a strong drive from the back of the grid (after missing the reconnaissance lap). From going a lap down in the first stint, the CORE crew completed their pitstop and installed Braun just before the full-course caution, which meant they were able to cycle ahead of the GTD cars and rejoin the tail of the PC runners under yellow.

For James French, it was a case of what might have been. He dominated the first stint for Performance Tech, his lead up to 17sec, but this was dissolved under yellow, and after handing over to Marcelli, the car emerged from the pits in third. Marcelli then lost third to Simpson at the drop of the green, and briefly also lost fourth to Mowlem before regaining the position.

Thereafter he stayed in touch with Simpson without ever looking likely to pass until the final laps, when Marcelli snatched fourth.

A clear-cut victory for Alex Job Racing, this one, as only misfortune or a bad pitstop looked likely to shake the #23 Porsche 911 GT3 R off the top of the tree.

Alex Riberas pulled to 16sec lead ahead of Christina Nielsen’s Scuderia Corsa Ferrari in the opening stint, and although he lost that under yellow, the AJR team did a sterling job of turning the 911 around and ensuring that Riberas’s co-driver Mario Farnbacher emerged from pitlane in front. Nielsen’s replacement Alessandro Balzan stayed close, and even whittled the lead down to 0.5sec on lap 50, but was never close enough to make a move, and crossed the line 3.6sec adrift.

Very impressive in third was the Turner Motorsports BMW M6, driven initially by Brett Curtis and then by Jens Klingmann. Until getting caught among obstructive backmarkers in the final 20 laps, Klingmann had kept a visual on the Porsche and Ferrari ahead, and looked set to claim third, until getting mugged on the final lap by the James Davison/Brandon Davis TRG Aston Martin Vantage and the Stevenson Motorsport Audi R8 of Robin Liddell and Andrew Davis.

Jeroen Bleekemolen and Ben Keating brought the Viper Exchange Dodge Viper home sixth, ahead of Bryan Sellers/Madison Snow in the Paul Miller Racing Lamborghini Huracan, Cooper MacNeil and Leh Keen in the second AJR Porsche (after starting at the back), Lawson Aschenbach and Matt Bell in the second Stevenson Audi, and Corey Lewis and Spencer Pumpelly in Change Racing’s Lamborghini.