The Extreme Speed Motorsports driver will lead the Prototype (P) class field to the green flag Sunday with Richard Westbrook next to him on the front row driving the Spirit of Daytona Corvette DP. His pole-winning lap was 1-minute, 18.561-seconds in the No. 2 Honda, while Westbrook clicked off a lap of 1:18.788. van Overbeek’s teammate Ryan Dalziel will start third via a lap of 1:18.970. 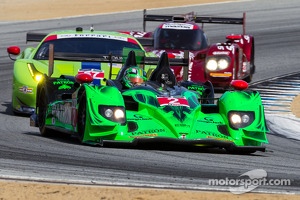 “The car worked really well so I think it bodes well for tomorrow’s race,” said van Overbeek. “The long fast corners definitely suit this style of car, we’re still not nearly as fast on the straightaway but we make it up in other places. I think with that it will make a very interesting race tomorrow.”

If qualifying is any indication, the balance of performance changes made prior to the Mazda Raceway round of the TUDOR United SportsCar Championship appear to have worked. The changes were an effort to further close the gap between the Daytona Prototype cars and the P2 cars. Three P2 cars – including van Overbeek’s – and two DP cars qualified in the top five.

Second-fastest was BMW Team RLL driver John Edwards. He turned a lap of 1:22.578 in his BMW Z4 GTE. Porsche North America driver Nick Tandy rounded out the top three with a lap of 1:22.678 in a Porsche 911 RSR.

“The Corvette C7 worked pretty good and I just hope to carry on the momentum we do have … now (co-driver) Jan (Magnussen) knows what he needs to do, just give me the car with 10 seconds on the lead and I just finish,” Garcia said, referring to the team’s dominant win at Long Beach last month.

Bruno Junqueira spun early in qualifying but came back on his last lap to capture the Prototype Challenge pole with a lap of 1-minute, 19.723-seconds (101.060 mph) in the No. 09 RSR Racing Chevrolet ORECA FLM09.

The last lap was also a charm for Spencer Pumpelly in a red flag-shortened qualifying session for GT Daytona. Pumpelly, driving the No. 45 Audi R8 LMS, took the pole with a lap of 1-minute, 26.695-seconds (92.933 mph).

Sunday’s Prototype Challenge and GT Daytona class race starts at 1:15 p.m. ET., followed at 5:45 ET by the Prototype and GT Le Mans races. Both will be shown live of FOX Sports 1.