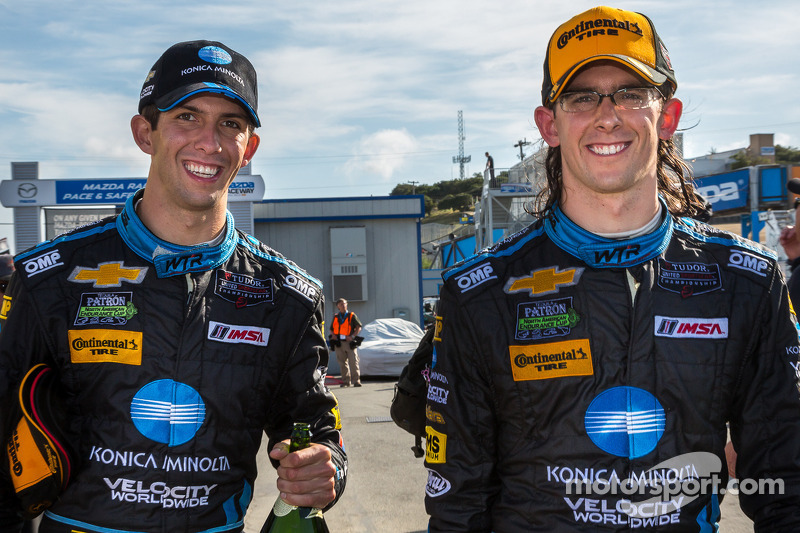 Brothers Ricky and Jordan Taylor – Jordan is the one with the mullet, and on the right in the photo, and more about the mullet in a moment – will be racing their family-owned Wayne Taylor Racing Konica Minolta Chevrolet Corvette Daytona Prototytpe this Saturday at the TUDOR United SportsCar Championship Chevrolet Sports Car Classic, which will be at Detroit's Raceway on Belle Isle.

This weekend's 100-minute race features the TUDOR Championships Prototype and GT Daytona classes, and it will take the green flag at 12:10 p.m. eastern time. The race will be televised on FOX Sports 1 beginning at 1:30 p.m. eastern time.

Ricky has seven career professional sports car victories, his best result in Detroit so for was a fifth-place run last year in the Grand-Am Rolex Sports Car Series race. Jordan has won both of his previous visits to Detroit. He won the Rolex Series GT class in 2012, and in Daytona Prototype last year alongside Max Angelelli on their way to the 2013 Rolex Series DP championship.

Immediately following Saturday's race both Jordan and Ricky will be headed to Le Mans to participate in the mandatory test day on Sunday. Jordan will be part of the No. 73 Corvette Racing Chevrolet Corvette C7R driver lineup alongside TUDOR Championship regulars Jan Magnussen and Antonio Garcia in the GTE Pro class. Ricky will share the No. 50 Larbre Competition Morgan Judd in the LMP2 class.

And speaking of P2 cars, Motorsport.com asked the brothers on a Wednesday conference call about whether or not they are pleased with the way the TUDOR Championship has attempted to gain parity between the P2 and Daytona Prototypes, which compete against each other at the top level. IMSA has attemoted to balance the DP cars (which came from Grand-Am) against the P2 cars (which came from the American Le Mans Series) – tough, because while they may look similar, they are very different cars.

“I think the parity is actually really good,” said Ricky Taylor. “I think it's hard to kind of get over the hump of the first Daytona where everybody knew the DPs would be favored, and then we went to Sebring, and I thought it was very evening. I think a P2 car ended up with the fastest lap of the race, but the way the races went, it favored the DP, and then Long Beach I thought was pretty close, maybe a little bit favored to the DP, and then Laguna was a P2 track.

Jordan Taylor agrees. “I think since Sebring, it's actually been quite good. I remember battling with Simon Pagenaud in the Extreme Speed car and I was one of the first people, I didn't really say it out loud, but I never really thought the cars could be close, a DP and a P2. Once I was around Pagenaud for around 45 minutes straight at Sebring, the cars were shockingly close, not just in the corners but also in the straights. I think certain types of corners that lead into straights suit us, and certain types of corners suit them.

“Different tracks can suit different cars, and just like Ricky said, you can't ask for everything. You can't have cornering speeds and straight line speeds. It's got to be a balance of the two. Different tracks, different people are going to be complaining, but we did as well as we could have done at Laguna finishing second to a P2 car, and they've been up front like Muscle Milk was up front at Daytona when that was a DP track. As long as teams are executing well, I think the balance of the performances have been quite good. 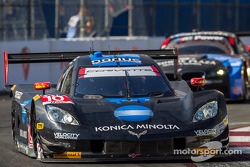 Regarding the Belle Isle race at Detroit this weekend, Jordan pointed out that the tight course makes passing difficult.

“Looking back at the past few years, we didn't necessarily have the fastest car both years, but Detroit is a street course, and it's a difficult place to pass, and I feel both times that we've been there, both with Auto Haas in 2012 and then last year with Wayne Taylor Racing that we were good in the pits, and after the last pit stop they left in the lead, and I think that really set the tone for the races, being that track position and basically controlling the race from front.

“Our team has been notoriously good this year and last year in the pits, so as long as we can keep that trend going and both Ricky and I can keep it up somewhere near the front, I think we'll have another shot at another win."

With Le Mans practice so close, the GT Le Mans cars, like the factory Chevrolet Corvettes, won’t be in Detroit this weekend, meaning that the Corvette DP cars will have to carry the brand. “It's one of our most important races of the year, being that we're in GM's backyard and on a street course,” Ricky said.

“It's in a very important part of the season, so we're putting a lot of pressure on ourselves to perform well. And then in terms of winning races, I think we've been right up there. I think it's just a little bit of track position here and there. I think we just weren't the strongest car at Laguna, so we settled for good points and second place and then Long Beach and Daytona we were right there. I think it was just a matter of being in the right place at the right time. We're just going to have to keep pushing, and if we keep running this strongly, I'm sure the wins will come.”

Both brothers says it will require a lot of concentration to handle Detroit, then immediately head to France. “This will be the third year now that I've done this crazy trip to get over to Le Mans for the test day,” Jordan said. “Basically the race will finish and then we'll basically try and get off the Belle Isle island as fast as possible to get to the Detroit airport for a flight at I think 6:30 p.m. that gets to Paris sometime Sunday morning, then we're straight on a train down to Le Mans, then hopefully someone is there to pick us up to take us to the track, and then basically we're straight in the race car for the afternoon session at Le Mans.

“Hopefully we get a good three or four hours of testing under our belt. It's not the most ideal situation, obviously, but we only get one day of testing at Le Mans, and that's our one day.“I remember in 2012, I think, I won the race in Detroit, didn't get to go to the podium, didn't eat dinner that night, slept on the plane, didn't eat breakfast the next day because I was on the train down to Le Mans and straight into the race car. It's definitely a unique experience.”

And finally, about that mullet…

“I've been growing a mullet now for about a year and a half,” Jordan said, “and I'm getting kind of tired of it, so I got talking with a couple of charities, Camp Boggy Creek and Camp Anokijig, and we're basically giving money, doing a raffle, and whoever wins the raffle is going to get two tickets to the Watkins Glen Six Hour, a ride in the two seater Daytona Prototype from Continental Tire, and then the runner up in the raffle will be getting a set of Continental Tires. So trying to raise as much money for the charities, and then whoever wins it is going to come to the event and cut off some of my hair and have a great weekend. Hopefully we can raise a bunch of money for it.”