Riley Motorsports to defend their Rolex 24 at Daytona GTD victory in No. 93 Dodge Viper GT3-R 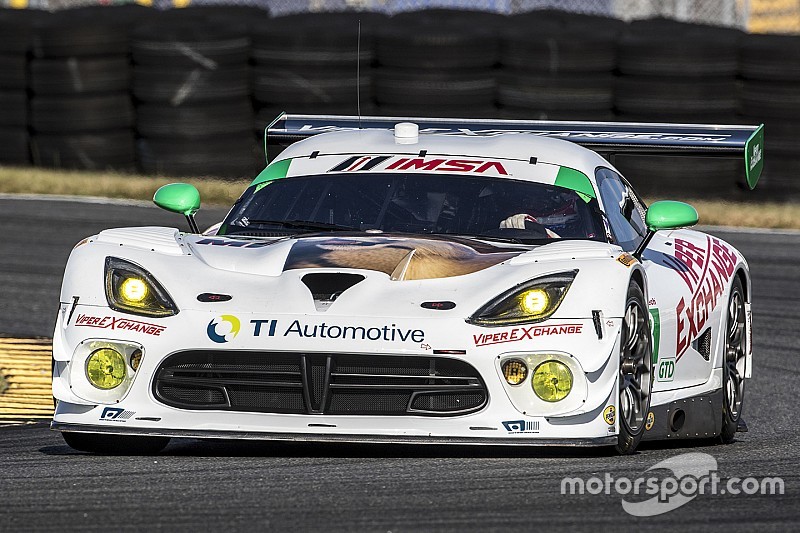 Keating, who will pull double-duty in the Rolex 24 in the No. 93 and No. 33 Viper GT3-Rs for the second-consecutive year, was part of this year’s winning driver lineup at Daytona. He co-drove the No. 93 to the GTD victory with Dominik Farnbacher, Kuno Wittmer, Cameron Lawrence and Al Carter and later in the season raced his primary No. 33 ViperExchange.com entry to a pair of wins at Road America and Circuit of The Americas with Jeroen Bleekemolen. Keating’s three race wins were more than any other driver in the 2015 GTD season.

When my dad told me I would be racing in the Rolex 24 At Daytona it almost didn't register,

“I feel very excited and expect the Viper to be strong,” Keating said. “We will have a bunch of new competitors at Daytona and many new cars. In fact, the majority of the GTD field will be new GT3 cars. I know that it took us a while to sort out our new car back in 2014. I feel good about having two completely sorted cars competing in a 24 hours race against brand new cars. That doesn't mean that any car can't have problems, but I feel like it controls at least a little bit of the risk. We have reliable, fast cars that are easy to drive and that is all you can ask for in the Rolex 24.”

Robinson, who turns 21 on January 17, joins ViperExchange.com following a breakout season in Trans Am that saw him win the TA2 championship, Rookie of The Year and three races at Mid-Ohio, NOLA Motorsports Park and last month’s finale at Daytona. He is the son of race-winning sports car road racing driver George Robinson who has a long and established history with Riley Motorsports and Riley Technologies.

“When my dad told me I would be racing in the Rolex 24 At Daytona it almost didn't register,” Robinson said. “I am so excited to be able to compete in the race that I've been wanting to run since I was old enough to walk. I'm hoping my Trans Am experience will allow me to be able to hang with the big boys in IMSA. The Rolex 24 for me and the Robinson family is the equivalent of what the Indy 500 means to Adam Andretti and the Andretti family.”

Among the drivers Robinson edged for his Trans Am championship was Lawrence, who came to Daytona with ViperExchange.com this year as the two-time and then reigning TA2 champion and left a winner in his Rolex 24 debut. Lawrence, Carter and the No. 93 team went on to win the 2015 Tequila Patrón North American Endurance Cup (NAEC), picking up another victory at Watkins Glen in June.

“This will be the second-year-in-a-row to have the Trans Am TA2 champion in the No. 93 Viper,” Keating said. “I would say it worked out extremely well in 2015. I know that Gar was able to edge out Cameron for the title in TA2 this year and that speaks volumes. I think TA2 is one of the most competitive classes of sports car racing. If Gar can win there, then he can win in our car. I am totally excited about it. Plus, I'm glad to have as many Texans in the car as possible.”

Both Texas natives, Keating lives nearby ViperExchange.com headquarters in Tomball while Robinson and his family are longtime residents of San Antonio.

“I have watched Gar come up through a little bit,” said Riley Motorsports Team Director Bill Riley. “When he got into the TA2 car it really started to click, especially this year with him winning the championship, winning some races and running up front. We know TA2 isn’t an easy place, especially with the likes of Cameron Lawrence there, so with Gar winning there he had the strong talent to do it.”

Tackling the Rolex 24 with two entries is always Riley’s preferred approach. In this year’s race, the No. 33 Viper was just as competitive as the winning No. 93 entry before dropping from contention with a crank sensor issue while leading early Sunday morning.

“Ben Keating wanted to have two cars at the Rolex 24 again and, with the help of Viper Exchange, we are able to have two strong cars,” Riley said. “Now we are filling up the 93 with a strong group of drivers and it should be a contender just like it was last year.”

With the Holiday season in full swing and the annual Roar Before the Rolex 24 At Daytona test just three weeks away, Riley and the ViperExchange.com team are planning on Robinson taking his first laps in the No. 93 during that January 8 – 10 event at Daytona International Speedway.

“We are aiming for the Roar, Gar is hopefully coming to the shop before New Year’s to get fitted, and then we will just go straight to the Roar,” Riley said. “We did have a good test at Daytona in November and made the car very comfortable for Ben, Jeroen and Marc Miller, so that should transfer over to the 93 for a pretty nice car to drive right off the bat.”

Keating, ViperExchange.com and Riley Motorsports are currently reviewing their final driver choices for the remaining seats in the No. 93 for the Rolex 24 At Daytona.