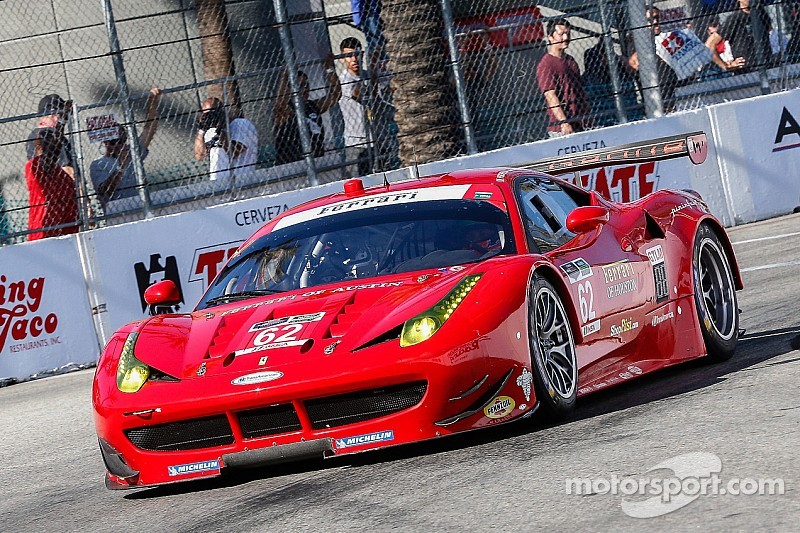 The popular Ferrari team finished in second place for the second race in a row.

Long Beach, California - The No. 62 Risi Competizione Ferrari F458 Italia had a near perfect race today in the exciting Tequila Patrón Sports Car Showcase at Long Beach, Calif. , Round 3 of the 2015 IMSA TUDOR United SportsCar Championship season. The popular Ferrari team finished in second place for the second race in a row, having had the same result at Round 2's 12 Hours of Sebring race in March.

Qualifying driver Giancarlo Fisichella had an excellent start to the 100-minute sprint race when he managed to jump into the lead from the third starting position early on the first lap. He led the GTLM class for the first 31 laps of the race and approximately 45 minutes. The Risi Competizione team had a perfect pit stop and managed to maintain the lead after their quick stop for fuel, tires and a driver change to teammate Pierre Kaffer.

Unfortunately, the DP car crashed in front of me into the wall and I collected a lot of pick-up debris.

Kaffer drove an excellent stint and was able to hold off the hard-charging efforts of both the BMW and Corvette teams until Lap 66, when a Prototype car struck the wall in front of Kaffer and he had to maneuver off the racing line to avoid contact. In doing so he collected off-line debris on his tires which slowed his pace, allowing eventual class winner Dirk Werner (with teammate Bill Auberlen), in the No. 25 BMW, to pass him and maintain the class lead for the remaining 12 laps.

The Risi Competizione team won the DEKRA Green Challenge Award for the second race in a row, having won it in Round 2 at the 12 Hours of Sebring, due to their excellent pit stop. The award is given to the team who exhibits the cleanest, fastest and most efficient pit stop performance.

Giancarlo Fisichella, qualifying and starting driver, No. 62 Ferrari F458 Italia: "It was a great start to the race and great reaction time and maybe even the better straight finish line speed. I was quite comfortable for the first part of the race and then the tire pressure went up a bit and the car was sliding slightly more on four wheels. The BMW were better in the mid-field but I was able to keep them behind me. We did a great pit stop and Pierre was doing well. Unfortunately, with about ten minutes to the end, the BMW was catching him and overtook him at the end. Yeah, it's disappointing but it's another great result. The crew did a fantastic job and I'm looking forward to the next race in a few weeks."

Pierre Kaffer, driver, No. 62 Ferrari F458 Italia: "I think this race was a bit unlucky in the end. It was a race of the boys. I think we made an awesome pit stop. It was perfect. Everything was under control. Unfortunately, the DP car crashed in front of me into the wall and I collected a lot of pick-up debris. In that moment, the BMW was behind me and he was miles faster than me. I was struggling to keep the car on the track. I have to say, congrats to BMW. They were the fastest car on the track today. So, now we've finished two times in a row in second place, which is very good for the Championship.

I'm really proud of the whole Risi Competizione team. They've been very strong and I'm really satisfied with the second place finish. I'm already looking forward to Laguna Seca in two weeks. I think we will have a strong car and our Ferrari will be in good shape there. We will have the new aero dynamic, which will help us in the end of our stint. And I'm really excited for Laguna Seca, which is one of my favorites."

Rick Mayer, Risi Competizione Race Engineer: "It was looking pretty good initially. Fisichella got a fantastic start and was able to hold the BMWs off. The BMWs obviously had pace on us at this track, two or three-tenths a lap. In a straight fight they would have beat us but we held them off. We got into the pits and the boys did a good pit stop. It was two seconds better than anyone else's and that kept us in front. Then Pierre has managed the gap very well. I was telling him lap times for every lap. He got behind one of the prototypes coming off Turn 9 and one of them hit the wall there.

He tried to get around him and they slowed him a bit so he had to get out of their way and dodge them and had to go off line. Once he got around them he had a bunch of pick up on the tires and he couldn't get it off and Werner in the BMW got around him. Before that we thought he had enough of a gap that we thought he could hold him off and without the traffic from the prototypes it would have been very, very difficult.

They both did a good job. He brought the car home without a scratch. Second place is pretty good and we can't complain about that. We'll go on to Laguna and hope we get a better result there with the new aero package we have for that race."

Dave Sims, team manager, No. 62 Risi Competizione Ferrari F458 Italia: "We were leading for about ninety minutes of the race. Fisichella was fantastic from the start and had a perfect stint. He didn't put a wheel wrong, looked after his tires and didn't get into a bit of trouble. It really looked like good things were to come. When he pitted, the guys did a fabulous stop. We beat the BMW out and were back into P1 (first position).

Towards the end, the Bimmers (BMWs) were starting to catch us but we looked pretty comfortable and thought Pierre could have held them off. A prototype hit the wall in front of him and, avoiding that incident, put him back four seconds, as he had to go on the dirty rubber line and that made the car slide all over the place but there's nothing he could do about it. But he brought it home in P2 and we'll take it. This put us up in the Championship a bit, which is a positive."

"As with Sebring we won the Dekra Green Challenge again. It all points to the maintenance of the car in the pit stops and fuel consumption and everything that goes with the performance of the team. It's really special. We'll take it every time!"

The next race for the No. 62 Risi Competizione Ferrari Team will be the Continental Tire Monterey Grand Prix sprint race, Round 4 of the IMSA TUDOR United SportsCar Championship in Monterey, Calif. on May 2-3, 2015.