Finishing 9th place in GTLM, the No.62 was a long way from the winning No.3 Corvette of Magnussen and Garcia, the drivers having battled with a balance and grip issue all weekend.

Long Beach, California - After 100-minutes and 75 laps around the streets of Long Beach in California, Round 3 of the TUDOR United Sportscar Championship, the Risi Competizione Ferrari 458 Italia this afternoon took the checkered flag for the first time this season. Finishing 9th place in GTLM, the No.62 was a long way from the winning No.3 Corvette of Magnussen and Garcia, the drivers having battled with a balance and grip issue all weekend. There were still, however, positives to be gained from the experience.

Ferrari factory driver Giancarlo Fisichella took the start of the race – which was a somewhat processional affair with no full course yellows to close up the field, the complete reverse to the previous round – and tucked in behind the factory Corvettes, BMWs and Porsches. After just 15 laps the Italian reported that he was losing a lot of grip but he maintained a consistent pace until what was due to have been the one and only pit stop of the race at the 42 minute mark. 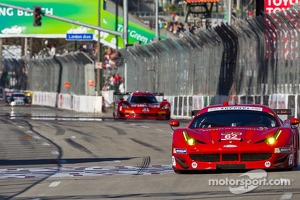 The Ferrari stopped on the same lap as all its main competitors and the Risi Competizione crew once again showed they were the class of the field – refuelling, doing a driver change and four Michelin tires in less time than any other car in pit lane.

American Dane Cameron (originally from Glen Allen in California but now residing in Georgia) took the wheel from Fisichella but make a small error three laps into his stint and went off track into the run off area. There was no damage to the car – definitely cause for Risi to celebrate this weekend – but the left front tire was carrying a flat spot for the remainder of the race which deteriorated to the extent that Cameron came into the pits for a second stop with just 10 minutes remaining.

Giancarlo Fisichella: “It was a difficult race; we couldn’t get what we expected from the car at the start of the weekend and we weren’t quick enough. It was a bit the balance of the car, a bit the set up – generally the grip was not enough and the car was very inconsistent on the curbs. But I finished my first race of the season and it was encouraging to get to the end of the race, even if we did have to have a second pit stop. We brought the car home so for the next race I’m sure we will be better – at the moment it looks like we need more power or less weight!”

Dane Cameron: “We weren’t able to ever quite get the exact balance that both Fisi and I were looking so I think we were slightly down on pace. We were hoping we’d be able to make some up with track position and we had a pretty good stop and strategy. I’ll own a small mistake that I made when I went down the escape road a few laps into my stint so I struggled with a flat spot after that. I enjoyed my first race in the Ferrari and had green flag racing for an hour so it was a solid first stint with the team which I very much enjoyed. We had the consistency but missed on the outright pace for the weekend.”

Risi Competizione’s next race will be at Mazda Raceway Laguna Seca on Sunday 4th May.