Braun and Bennett won a caution-riddled event, having gambled that they could make it on fuel to the finish after their final pitstop.

They beat the #99 JDC-Miller Oreca of Stephen Simpson and Misha Goikhberg, both cars running dry on their in-lap after pushing their fuel mileage to the limit.

Felipe Nasr/Eric Curran had looked set for victory, but Nasr was agonisingly 0.008s behind Simpson at the finish, and only 2.389s short of the win.

Others to gamble on fuel were Jordan Taylor/Renger van der Zande (WTR Cadillac) and Harry Tincknell/Jonathan Bomarito (Mazda), but they were both forced to abort for splash-n-gos in the final five minutes.

Poleman Robert Alon (JDC-Miller Oreca LMP2) led Ricky Taylor at the start, while van der Zande and Montoya collided twice over the opening lap, with the Mazdas of Oliver Jarvis and Tincknell demoting the delayed Montoya.

Gustavo Yacaman spun his #52 Ligier LMP2 into the gravel trap at the end of the opening lap, causing the race’s first full-course yellow. At the restart, Alon held off a run from Taylor, while Montoya was shuffled further back to ninth.

A second full-course yellow was caused when Francesco Piovanetti spun his GTD Ferrari into the wall exiting The Kink. Having pitted just before that yellow flew, Nasr took control at the front in the #31 AXR Cadillac, ahead of Braun, who’d done likewise to take over from gentleman racer Bennett.

Tristan Nunez held third in the #77 Mazda, ahead of Felipe Albuquerque in the #5 AXR Caddy, van der Zande and erstwhile leader Alon. The Penske Acuras were now eighth and ninth, but matters became even worse when Castroneves was tagged into a half spin at the restart in #7.

Alon was then penalised with a drive-thru for hitting pit equipment, dropping him to 12th, and then caused the third full-course yellow when he was punted off at Canada Corner by a GTD NSX.

After that restart, Albuquerque got past Braun for second. Braun then fell to seventh while taking a full fuel load during the next round of stops, with Jarvis’s Mazda up to third.

A final yellow, with just over 40mins to go when Sebastian Saavedra slammed into the wall and parked in pit entry, opened the door to the fuel gamblers.

Taylor, Bomarito, Braun and Simpson all attempted a gamble to the finish, but the yellow they needed never came.

Taylor pitted with five minutes left on the clock, with Bomarito in on the next lap, but Braun and Simpson committed and stayed out to score an unlikely 1-2. Nasr and Curran had to settle for extending their points lead in third. 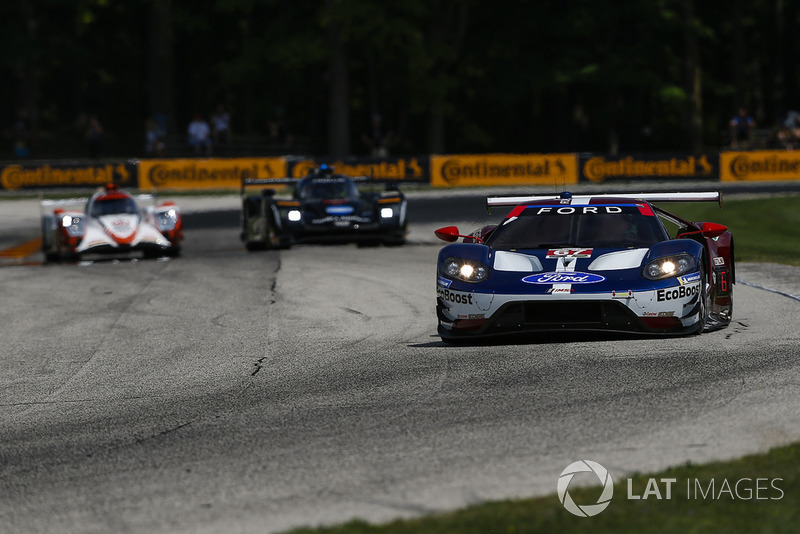 Richard Westbrook and Ryan Briscoe scored a hard-fought GT Le Mans victory in their Chip Ganassi Racing Ford GT, having survived a clash with a GTD Ferrari and Nick Tandy’s Porsche to grab the win in the closing moments.

As in the overall race, there was a huge fuel gamble taken by the #25 BMW of Connor di Phillippi/Alexander Sims, which short-filled at the penultimate yellow to jump ahead of the #67 Ford.

Westbrook’s battered Ford chased down di Phillippi, and passed him with just two minutes remaining. An out-of-gas di Phillippi wouldn’t even make it back to the pits, never mind the finish, which handed second to the #4 Chevrolet Corvette of Tommy Milner/Oliver Gavin, ahead of the sister Vette of Antonio Garcia/Jan Magnussen.

Porsche finished fourth and fifth, with Tandy having led after a fortuitously-timed first stop, only to be penalised for contact with Westbrook.

The erstwhile points-leading car of Dirk Muller/Joey Hand had looked favourites to win, but a right-rear suspension part had to be replaced. It finished seventh in class. 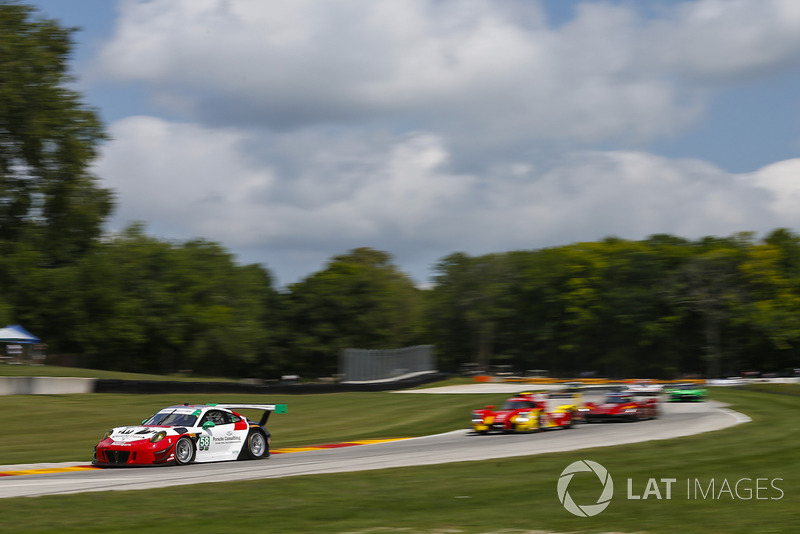 Cooper MacNeil and Alessandro Pier Guidi finished third after a wild race in their Scuderia Corsa Ferrari 488, which included numerous bouts of contact with rivals.