Roar Before the Rolex 24 three-day test kicks off

DAYTONA BEACH, Fla. – The pursuit for a coveted Rolex watch hit high gear on Friday as the Roar Before The Rolex 24 test kicked off at Daytona International Speedway.

More than 100 cars between the IMSA TUDOR United SportsCar Championship and the IMSA Continental SportsCar Challenge began an intense three-day test on the twists and turns of the 3.56-mile road course preparing for the Rolex 24 At Daytona Weekend Jan. 22-26. 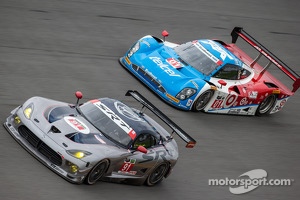 Chip Ganassi Racing with Felix Sabates, the defending champion of the Rolex 24, has been the dominating team of sports car racing’s premier event. Between 2006-13, Ganassi has won the twice-around-the-clock challenge five times and finished second twice. During Friday’s lunch break, the car owner announced his driver lineup for this year’s event.

Behind the wheel of the No. 01 Ford EcoBoost Riley will five-time Rolex 24 champion Scott Pruett, Memo Rojas, Jamie McMurray and Sage Karam. In the No. 02 car will be Scott Dixon, Tony Kanaan, Kyle Larson and Marino Franchitti.

“I think we have two lineups that we think are capable of winning of the race,” Ganassi said.

Last year’s Rolex 24 was a special win for Pruett, who with his fifth overall win tied Hurley Haywood on the all-time victory list.

“It’s just an incredible run of being here and coming here and seeing all these great drivers and great cars and that excitement that builds over the winter and then everybody getting here,” Pruett said. “It’s even more so amplified with the fact that, not just all the newness within the Ganassi organization, but all the newness within the new unified series and the different cars and drivers. Everybody is not sure what to expect and happen. Stay tuned, it’s going to be fun and it’s going to be exciting.”

Among the new faces to the Ganassi program include Larson, who will compete for top rookie honors in the NASCAR Sprint Cup Series, as well as 2013 Indy Lights champion Karam and sports car veteran and 2013 LMP2 ALMS champion Franchitti.

“When you get the call from Chip and the Ganassi organization you’re like, where do you need me and when?,” Franchitti said. “Whether it’s Daytona 500, Indy 500, or Daytona 24 Hours, Chip and his whole organization are built to win those big races. And I want to win this one really badly and I’m just delighted to be a part of this team.”

“I come down here because it’s fun,” McMurray said. “I’ve got to win the biggest NASCAR race, the Daytona 500, and I’ve won the Brickyard 400, and to me this is the one race that I would like to win more than anything right now. This is a huge race.”

Scout Days: During this weekend’s Roar Before The Rolex 24, more than 1,000 Boy and Girl Scouts from throughout the state of Florida will be participating in Scout Days.

The Scouts will camp overnight on Friday and Saturday in the infield in Turns 3 and 4 as well as participate in scavenger hunts, tech talks and pit stop demonstrations and a Fan Walk on Friday night.

In addition, a section of the Oldfield Grandstands will be open free to the public with access available through the lobby of the Daytona International Speedway ticket office.

ESM fifth quickest in Roar Before the Rolex 24