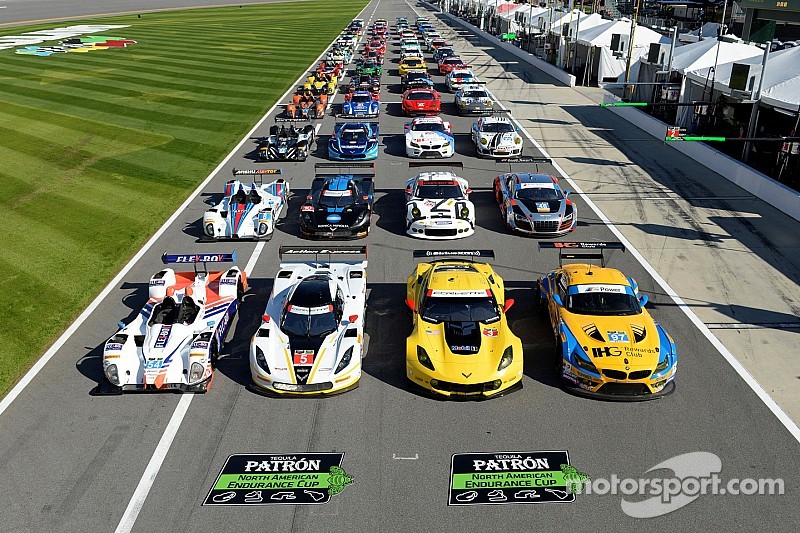 When the checkered flag falls on the 2015 Rolex 24 At Daytona at 2:10 p.m. Sunday afternoon, there’s only one thing we now know for sure: The car that’s the first under the flag will have earned the victory.

That may be an understatement. One year ago, the 2014 Rolex 24 was the first race for the new TUDOR United SportsCar Championship, which consisted of the combined GRAND-AM Rolex Sports Car Series and the American Le Mans Series presented by Tequila Patrón. Cars, personnel and schedules were combined, and no one really knew what would happen the first time the new TUDOR Championship took to the track.

What happened was a race that ran at an absolutely frantic pace for the full 24 hours. Long gone are the days where teams could cruise at 90 percent, saving their equipment for the last few hours. Now, it’s flat out, all day and all night.

For 2015, there are four Corvette DPs in the field, including the No. 5 Action Express entry, all sporting the new Stingray styling in the front and rear. For the stars to align and have all four Corvettes up front again is a long shot – even through the top three cars were all on the same lap at the finish, 695 laps after the start – the Prototype field is very strong this year.

There are 16 Prototypes, including a pair of brand-new Honda HPD ARX cars racing under the Tequila Patrón ESM banner, as well as a Honda-powered Ligier JS P2 that Michael Shank Racing is bringing to the party. There’s another new Ligier fielded by Krohn Racing, but it has Judd power.

Mazda is back for its second year with a pair of diesel-powered Prototypes built and raced by SpeedSource that are showing a lot more speed than last year. And you can never count out the Chip Ganassi Racing with Felix Sabates twins, both powered by Ford EcoBoost engines in Riley chassis. With a driver lineup that includes Scott Pruett, Tony Kanaan, Scott Dixon, Kyle Larson, Jamie McMurray, Joey Hand, Charlie Kimball and Sage Karam, the two Ganassi cars have to be counted among the favorites.

And, of course, there’s those other three Corvette DPs – the No. 31 Whelen Corvette DP, a sister car to the Action Express No. 5; the VisitFlorida.com No. 90 and the always-formidable Konica Minolta No.  10 of Wayne Taylor Racing, which has brothers Jordan and Ricky Taylor teaming with veteran Max Angelelli.

Looking for a dark horse? The DeltaWing Racing Cars Claro/TracFone was fast in practice, as was the Starworks Dinan-powered Riley, which has an all-star driver lineup that includes Ryan Hunter-Reay and Rubens Barrichello.

Of the four classes racing in the Rolex 24, the aforementioned Prototypes are the fastest, but not far behind are the open-cockpit Prototype Challenge cars, which use ORECA FLM09 chassis and Chevrolet engines. It’s tough to pick a favorite from the eight entries, but expect the Starworks No. 8, the CORE Autosport No. 54, the RSR Racing No. 11 and the BAR1 Motorsport No. 16 to contend during the 24 hours.

The GT Le Mans (GTLM) class is invariably among the most competitive and the highest profile, as the production-based cars are all backed by the manufacturers, and bragging rights are a strong motivation. Corvette Racing has its usual two-car entry and is always a threat to win, especially at a horsepower track like Daytona. There are three Porsche 911 RSR entries, two backed by Porsche North America, and one by Falken Tire, coming off an end-of-the-season victory at the 2014 Petit Le Mans Powered by Mazda at Road Atlanta.

The Bobby Rahal-led BMW Team RLL has a pair of BMW Z4 GTEs, and there are two Ferrari F458 Italias, one from AF Corse and one from Risi Competizione. But don’t forget the lone Gulf-sponsored Aston Martin Vantage V8, which has a world-class roster of drivers.

At 19, the largest of the four classes is GT Daytona (GTD), which – like GTLM, are familiar production-based cars – but don’t have quite the power, or the price tag, of the GTLM entries.

GTD is impossible to handicap, though the fact that there are nine Porsche 911 GT Americas in the field gives them the numerical advantage. There are three Ferrari 458 Italias, two Aston-Martin V12 Vantages, two Dodge Viper SRTs, a pair of Audi R8 LMS entries, and a lone BMW Z4, but that car is fielded by he respected Turner Motorsport, so don’t write it off.

If you have to play favorites, the two Alex Job-prepared Porsches (Nos. 22 and 23) should be there in the end, because few have mastered race strategy as well as Job. The No. 63 Ferrari of Scuderia Corsa seems to love the longer races, as does the Magnus Racing No. 44 Porsche. If you are looking for star power, that would be the No. 58 Dempsey/Wright Motorsports Brumos Porsche, with “Grey’s Anatomy” actor Patrick Dempsey leading the four-driver team.

Bottom line: Don’t expect a runaway winner in any of the four classes – competition is simply too strong. Weather could be a factor, if the forecast for some damp weather for the weekend comes true – some cars, and some drivers, seem to thrive on wet pavement, and a slick surface tends to cripple the highest-horsepower entries, leveling the playing field and enhancing the importance of driver finesse.

So keep your money in your pocket this weekend – the 2015 Rolex 24 at Daytona is simply too close to call.

RG Racing ready to turn dream into reality at Daytona

Rolex 24 at Daytona: Outsiders to watch