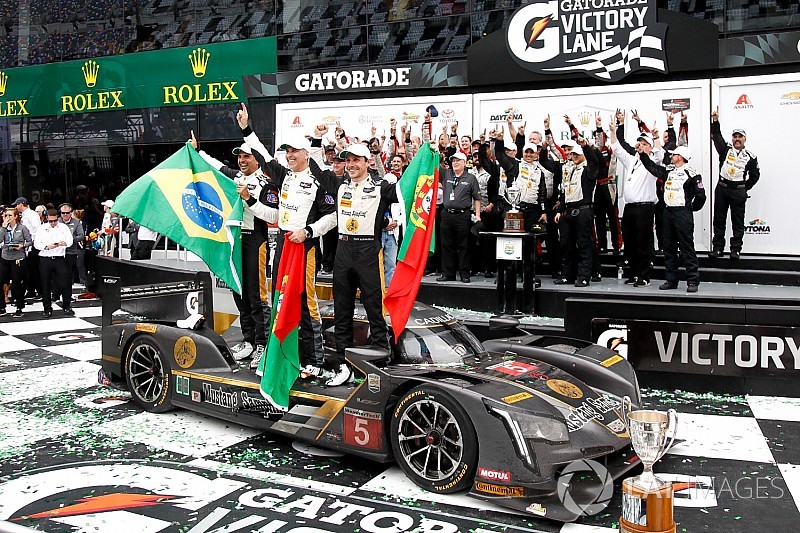 Action Express Racing took victory in the 56th running of the Rolex 24 Hours, establishing a new distance record in the American endurance classic.

Filipe Albuquerque, Christian Fittipaldi and Joao Barbosa completed a total of 808 laps in the #5 Cadillac DPi-V.R, beating the previous record of 762 laps set on the current track layout in 1992.

The trio also overhauled the mileage record established in 1982 on the previous 3.84-mile configuration of Daytona International Speedway.

After an action-packed early few hours, the race developed into a straight contest between the two AXR Cadillacs and Team Penske's pair of all-new Acura ARX-05s.

But Penske's challenge crumbled just beyond half-distance with an alternator problem for the #6 car and a trip to the garage for the #7 when Helio Castroneves made contact with the #31 Cadillac of Felipe Nasr.

That left the AXR pair with a major advantage, which allowed both cars to make late trips behind the pitwall to top up their fluids amid concerns of overheating.

The #31 car - shared by Nasr, Mike Conway, Eric Curran and Stuart Middleton - emerged from its stop in a fight for second with the #54 CORE autosport Oreca of Colin Braun, Jon Bennett, Romain Dumas and Loic Duval.

Braun managed to close a 40-second gap in the closing stages as Middleton took over for the final stint and had to save fuel, but ended up falling short by 21 seconds, as Albuquerque brought home the #5 car 70s ahead of Middleton.

United Autosports took fourth place with the best of its Ligier JS P217s, the #32 car of Bruno Senna, Paul di Resta, Will Owen and Hugo de Sadeleer, which lost a possible podium finish to a clutch issue.

Fernando Alonso's #23 United Ligier dropped out of contention for a potential podium place in the evening with a brake issue that forced a lengthy trip to the garage to replace a master cylinder, before losing more time with a throttle issue and then a late repeat of the brake problem.

In the #37 DCR Oreca he shared with Daniel Juncadella, Robin Frijns and Felix Rosenqvist, Lance Stroll ended up 15th overall and 32 laps down after losing a significant amount of time to repair bodywork and suspension damage after a puncture.

The race was marked by a high number of casualties among the DPi contingent, including the two remaining Cadillacs of Spirit of Daytona Racing and Wayne Taylor Racing.

Spirit of Daytona had to retire the #90 car, which starred early on in the hands of Tristan Vautier when it developed an engine misfire, while WTR eventually withdrew the polesitting #10 car following a spate of right-rear punctures.

Both ESM Nissan DPis also dropped out in the night, the #2 machine with a gearbox failure and the #22 with a blown turbo.

Likewise, neither of the Joest-run Mazdas made the finish. Both the #55 and #77 cars were already many laps down when they retired, due to a fire and a recurring electrical problem respectively.

Ford sealed a one-two finish in the GT Le Mans category, a result that looked in little doubt from the early stages of the race when the two Chip Ganassi Racing-run GTs quickly gapped the field.

Although the best of the Corvettes was able to take advantage of cautions to close in, it was unable to threaten the Fords in the restarts.

The #66 Ford of Joey Hand, Dirk Muller and Sebastien Bourdais led for much of the distance, but the #67 GT of Ryan Briscoe, Scott Dixon and Richard Westbrook managed to get ahead in the final four hours by short-filling and took the checkered flag by 11 seconds.

Corvette's #3 C7.R of Jan Magnussen, Antonio Garcia and Mike Rockenfeller was two laps behind at the finish, a lap clear of the #4 car of Oliver Gavin, Tommy Milner and Marcel Fassler, which had to change its brakes under green flag running.

The best of the BMW M8s was seventh in class on the car's debut, 10 laps down on the Fords, behind the #82 Risi Competizione Ferrari 488 GTE and the best of the Porsches, the #912.

Porsche's other mid-engined 911 RSR, the #911, was ruled out of contention after a crash for Nick Tandy a little before half-distance, while the second BMW also lost considerable time after Bill Auberlen suffered a fender loss and other panel damage following a front-right puncture on the banking.

The car had to start from the back of the grid after failing its stall test during post-qualifying tech inspection, but worked its way back into contention in the early hours, helped by a strong early evening stint in the wet by Perera.

A contentious five-minute penalty for the #29 Land Motorsport Audi blew the GTD contest wide open, with the #11 car ending up in a four-way fight with the #33 Team Riley Mercedes, the #86 Michael Shank Racing Acura NSX and the #48 Paul Miller Racing Lamborghini.

Mercedes man Jeroen Bleekemolen had closed to within a second of Bortolotti in the final half-hour, but had to make a stop just 13 minutes before the checkered flag and dropped to fourth.

BMW insists it is committed to IMSA's BoP system