Both, GT Le Mans (GTLM) and GT Daytona (GTD), went down to the final lap after 24 hours of intense competition.

Both of the GT classes provided plenty of excitement in the 52nd Rolex 24 At Daytona, with both GT Le Mans (GTLM) and GT Daytona (GTD) going down to the final lap after 24 hours of intense competition.

Porsche North America won in GT Le Mans (GTLM) in the debut of the factory team run in conjunction with CORE autosport. Patrick Pilet beat BMW Team RLL's Joey Hand to the checkered flag by 2.838 seconds in the No. 911 Porsche 911 RSR. 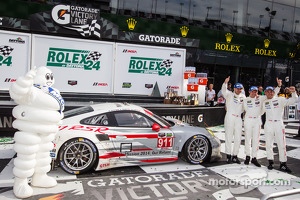 Richard Lietz took his second Rolex 24 GT victory, having won in a Magnus Racing Porsche in 2012. He was joined by first-time winners Pilet and Nick Tandy. It was Porsche's 76th class victory in the history of the Rolex 24, and the 40th triumph for a 911-based Porsche.

SRT Motorsports started on the GTLM pole with Marc Goossens in the No. 91 SRT Viper GTS-R. Action through the bulk of the event featured the two Porsche North America entries taking on first the two SRT Vipers, then a pair of Corvette Racing C7.Rs. Attrition took its toll, as the second Porsche 911 RSR (the No. 912 of Patrick Long, Jorg Bergmeister and Michael Christensen) dropped from contention. Meanwhile, the two Team RLL BMWs worked their way back from two laps down.

"When I jumped in the car, I had a two-lap lead," Pilet said. "I thought I could cruise to the finish. But the BMW came back, and it was really close. There was a lot of traffic in front of me, and I had to take a lot of risk in the closing laps. I tried to do my best and it worked – fantastic! This is a brand-new team, a new car and a new championship. It was a lot of hard work. There was no Merry Christmas or Happy New Year for many people. Tough, but we got the best result we can expect."

With time running out, Hand made his moved to the outside of Pilet on the superspeedway trioval. The two went three-wide approaching turn one as they passed a slower car. Hand briefly nosed ahead, but Pilet had the better line approaching Turn 1 and was able to regain control.

"Who would have believed, after we were down by two laps that the GTLM race would come down to the last lap?" said Hand, a regular for BMW in the DTM series. "We didn't have a lot left in the car, but I went for it. I just tried to be better in traffic. I had a good run going, but I got pinched up high trying to get by a Ferrari, and that stopped my roll and allowed the Porsche to get away. We had a car that went all the way – and that was our plan all the way. This was a great start for the team for the championship."

Co-driving with Hand were Bill Auberlen, Andy Priaulx and Maxime Martin. Third went to the No. 91 Viper of Goossens, Dominik Farnbacher and Ryan Hunter-Reay. 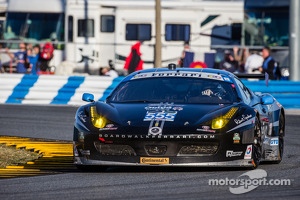 GT Daytona (GTD) was even closer. Alessandro Pier Guidi, driving the No. 555 Level 5 Motorsports Ferrari 458 Italia, raced side-by-side with Flying Lizard Motorsports No. 45 Audi R8 LMS driver Markus Winkelhock. The pair nearly bumped in the chicane, with Winklehock going through the grass. Guidio held on, and was 1.293 seconds ahead at the checkered flag.

"What an unbelievable finish ... to hear from so many people in the last four hours like Mario Andretti and Dario Franchitti and Dan Gurney, and to hear from people on Twitter or texts or phone calls, as race fans watching great racing," Bell said. "I'm proud for IMSA and everything we're trying to do with this new series. Great racing wins the day." Winklehock was joined by Nelson Canache Jr., Spencer Pumpelly and Tim Pappas in the second-place finishing Flying Lizard Audi.

"It was an incredible last lap, and really tough racing," said Winklehock, who ran out of fuel on the final lap last year while battling for the lead.

Madison Snow, Jan Heylen and Marco Seefried finished third in the No. 58 Snow Racing Porsche 911 GT America, with 29 of the 67 total entries in the Rolex 24 running in the GTD class.