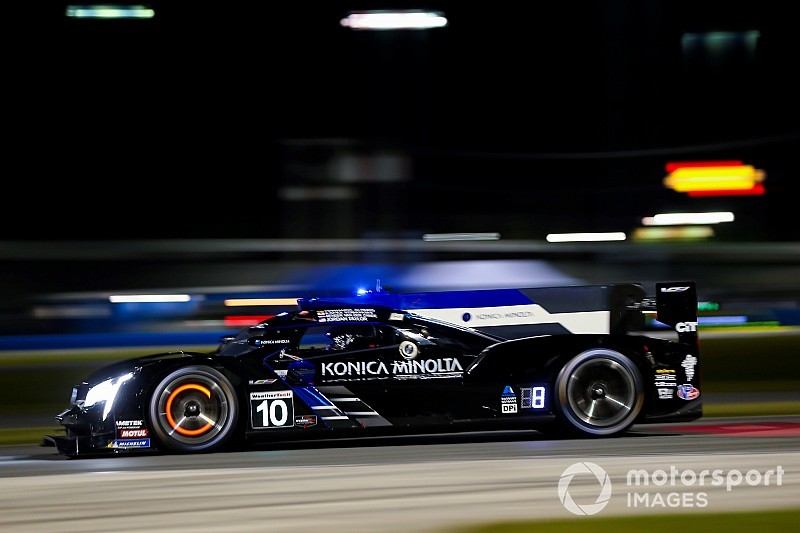 Fernando Alonso showed his class with a stirring stint that saw him climb from fifth to first and pull a 21sec lead in the Rolex 24 at Daytona before a caution erased his advantage.

A 15-minute caution period caused by the #24 RLL BMW M8 GTE stopping in the pitlane exit 2h45m into the race brought everyone into the pits and shuffled the order in all the classes.

Behind this trio, Alonso in the Wayne Taylor Racing Cadillac DPi-V.R nibbled at the heels of Eric Curran in the similar #31 Action Express machine, as Harry Tincknell in sixth place was trying to return the #55 Mazda to prominence.

Soon, both Alonso and Tincknell got ahead of Curran, and Alonso then moved into third by passing Cameron after 3hr10mins.

Alonso promptly set the WTR car’s fastest lap of the race as he closed on Castroneves and leader Rast. Just under 10 minutes later, Alonso forced Castroneves to concede second, and at the 3hr21min mark he outbraked Rast’s Mazda for the lead.

He had pulled a five second lead by the time the Prototypes all pitted, while behind them Tincknell also muscled past Curran.

Following the green-flag stops, Alonso’s lead was extended by three seconds, while Alexander Rossi took over the #7 Acura and started battling hard with the #77 Mazda, now piloted by Tristan Nunez, the #6 Acura which had been taken over by Simon Pagenaud, and the #31 AXR Cadillac now with Pipo Derani at the wheel.

Alonso then stretched a further 10sec away from the battling Nunez and Rossi, before the Juncos Racing Cadillac with Will Owen ran on at Turn 1 and needed rescuing, bringing out the third caution of the race and losing six laps.

The leaders grabbed the opportunity to pit, and Alonso now runs ahead of Rossi, Nunez, Tincknell, Pagenaud and Derani. Owen had been battling with the JDC-Miller Motorsports Cadillacs ahead of the CORE autosport-run Nissan.

The defending Prototype winners – the #5 AXR Cadillac of Christian Fittipaldi, Joao Barbosa and Filipe Albuquerque – are running 13 laps down after yet more electrical issues.

In LMP2 Pastor Maldonado came under pressure from his DragonSpeed teammate Nicolas Lapierre before handing over to Sebastian Saavedra but now both run behind class leader Matt McMurry in the PR1/Mathiasen Motorsports Oreca.

GTLM: Porsche back to the fore

In GT Le Mans, Fred Makowiecki leads in the #911 Porsche 911 RSR after a strong stint from co-driver Patrick Pilet, while the #4 Corvette C7.R is in second in the hands of Marcel Fassler, just ahead of Philipp Eng's BMW.

Davide Rigon in the Risi Competizione Ferrari 488 lies fourth ahead of the only Ford GT in the mix, piloted by Dirk Muller. The #912 Porsche is sixth but a lap down following its first-hour troubles, and the #3 Corvette is seventh and two laps down.

The #24 BMW lost six laps when the car fell off the jacks during a steering wheel change as Alex Zanardi handed over to Jesse Krohn, causing damage to the steering column.

The Land Motorsport Audi R8 of Christopher Mies has dominated GT Daytona for the last hour but the latest restart saw him under pressure from Justin Marks in the Meyer Shank Racing Acura and the Riley Motorsports Mercedes-AMG GT3 now with Felipe Fraga in the driving seat.