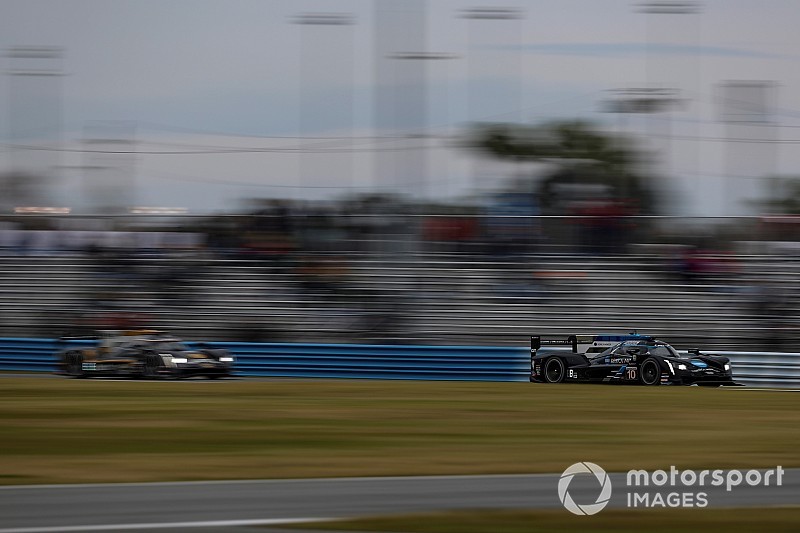 Fernando Alonso held a narrow lead for Wayne Taylor Racing over Action Express Racing's Felipe Nasr heading into the final two hours of the Rolex 24 at Daytona, before the race was red-flagged for a second time.

The 21st and 22nd hours were marked by stop-start action as the rain continued to fall, keeping the leading three cars of Alonso, Nasr and Alexander Rossi close together on track.

Alonso took over the #10 WTR Cadillac DPi-V.R shortly after the 21-hour mark from Jordan Taylor, who was struggling in the conditions and was passed for the lead by Nasr in the #31 AXR car shortly before his stop.

That dropped the #10 down to third, but a nose change for the #7 Acura ARX-05 of Rossi gave Alonso another place before the 16th caution of the race effectively reset the fight between the top three.

Nasr and Alonso duelled for the lead when racing resumed, with Nasr hanging on ahead of his former Formula 1 rival.

But the Brazilian gave up the lead just before the 22-hour mark when he ran wide at Turn 1, giving Alonso and WTR an advantage of more than 10 seconds before yet another caution was called.

That caution became a red flag with 1h55m left of the race to run as the rain intensified.

Rossi hangs on in third behind the two Cadillacs, while the CORE autosport Nissan DPi (which was reversed into a tire wall by Romain Dumas before resuming) and the lead JDC-Miller Cadillac remain fourth and fifth, multiple laps down.

The #6 Acura that dropped out of contention with an oil pump problem resumed after a lengthy visit to the garage, and sits eighth overall, 17 laps off the lead.

There was a change in the lead in LMP2 towards the end of the 22nd hour as the #81 DragonSpeed Oreca stopped out on track, giving the sister #18 car the advantage.

But former IndyCar racer Sebastian Saavedra sustained heavy front-left damage and was limping back to the pits at the time of the red flag, potentially giving the #38 Performance Tech car a clear shot at class victory.

In GT Le Mans, the two leading cars in class collided in the 21st hour, as the #911 Porsche 911 RSR of Frederic Makowiecki rear-ended the #66 Ford GT of Joey Hand during a chaotic restart at Turn 1.

The #66 car limped back to the pits without its rear wing, dropping multiple laps, while the #911 lost two laps repairing the damage.

That gave the lead in class to the #62 Risi Competizione Ferrari, but by the time the red flags came out James Calado had surrendered the advantage to Augusto Farfus in the #25 BMW M8 GTE.

Richard Westbrook held third in the #67 Ford GT, having pitted not long before the stoppage.

The #11 Grasser Racing Lamborghini Huracan GT3 led GT Daytona at the time of the red flag with Christian Engelhart at the wheel, ahead of Daniel Morad's #29 Land Motorsport Audi R8 LMS, which was a repeat spinner.

One notable retiree from the GTD ranks was the #63 WeatherTech Racing Ferrari of Toni Vilander, which was involved in a heavy crash with the #540 Black Swan Racing Porsche at the Bus Stop.

Roger Penske on Rolex 24: “I’ve never seen a race like this”