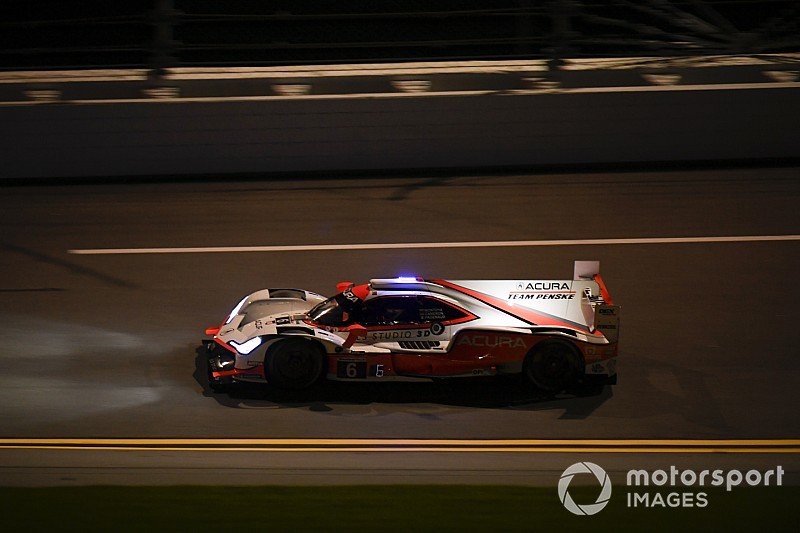 At one-third distance, the 57th Rolex 24 Hours at Daytona is being led by Acura Team Penske as three teams battle over the top four places, but disaster has struck Mazda Team Joest.

The last two hours were highlighted by a torrid battle for the lead between Kamui Kobayashi in the Wayne Taylor Racing Cadillac DPi-V.R and the Acura Team Penske ARX-05 of Juan Pablo Montoya, but after both pitted and handed over to their respective teammates Renger van der Zande and Dane Cameron, that battle dissipated somewhat.

Cameron was leading by 12 seconds, and his closest opposition was the #31 Action Express Racing Cadillac driven by Felipe Nasr, the #7 Acura of Ricky Taylor and van der Zande, who some half a minute behind.

However, with Don Yount stopping the #47 PPM Lamborghini out on track, the full course yellows flew just past the eight-hour mark, bunching the field and prompting pitstops. WTR took the opportunity to fit a new nose, which should have lost van der Zande time, but his rivals were held at the end of pitlane.

Colin Braun in the CORE autosport-run Nissan DPi lay fifth ahead of the #85 Cadillac in which Rubens Barrichello starred before handing off to Tristan Vautier.

But the big news came after 220 laps, when the two Mazdas struck trouble within three laps of each other. First Jonathan Bomarito slowed the #55 with a fuel pressure issue caused by a leak, and then the #77 of Timo Bernhard caught fire.

In LMP2, the two DragonSpeed Orecas run 1-2 despite brushing against each other, and Ryan Cullen (#18) now leads James Allen (#81).

In GT Le Mans, a terrific battle has been raging because thanks to some cunning pit strategies, there are now seven cars on the lead lap once more.

The Risi Competizione Ferrari 488 GTE currently steered by Alessandro Pier Guidi is leading ahead of the #66 Ford GT of Sebastien Bourdais, and the #911 Porsche 911 RSR of Patrick Pilet. They are under threat from the #25 BMW M8 GTE of Connor De Philippi and both Corvettes.

In GT Daytona, there are different strategies at play, so that Trent Hindman currently leads in the Meyer Shank Racing Acura NSX, chased by Dries Vanthoor in the Land Motorsport Audi R8 LMS and Jack Hawksworth’s Lexus RC F.

Off strategy in seventh is Ben Keating in the Mercedes AMG-GT3 of Riley Motorsports and Mirko Bortolotti in the Grasser Racing Team Lamborghini.

But the big loser among the erstwhile GTD frontrunners has been Park Place Motorsports who sent Matt Campbell on his way with a loose left-rear wheel. The #73 Porsche is now two laps down.