Defending Rolex 24 Hours at Daytona winners Wayne Taylor Racing, and Action Express Racing, have made it a Cadillac DPi-V.R 1-2 at quarter distance, while BMW is leading in GT Le Mans and Ferrari heads GTD. 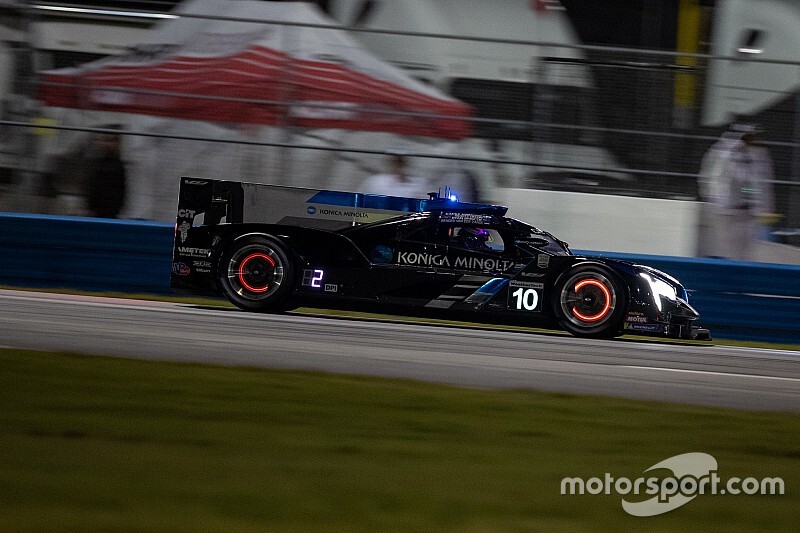 The first caution of the race came out with 19hrs16min to go following a clash between Alex Riberas’ Heart of Racing Aston Martin Vantage GT3 and Eric Lux in the Precision Performance Lamborghini Huracan GT3 Evo.

When the pits reopened, that allowed Simon Pagenaud – who had just stopped – to come in for a top-up in the #6 Acura ARX-05 and emerge in front of Filipe Albuquerque in the Action Express Racing Cadillac DPi-V.R and Olivier Pla in the Mazda RT24-P.

The Wayne Taylor Racing Cadillac driven by Renger van der Zande had a rear-wing change, dropping to fifth behind the JDC-Miller MotorSports Caddy of Loic Duval.

At the restart, Pagenaud was perfect but Albuquerque came under immediate pressure from Pla, who after one lap forced the AXR driver to make a slight error in Turn 1 and cede second. Just one lap later, the Mazda blasted past the #6 Acura to grab the lead.

Further back, van der Zande had wasted no time in climbing into fourth, past Duval, and joined the Pagenaud vs Albuquerque battle for second.

However, the latest rounds of stops saw a thorough reshuffling, with van der Zande moving into the lead for WTR ahead of Albuquerque, Pagenaud and the #77 Mazda now driven by pole-winner Oliver Jarvis.

Behind this quartet, Ryan Hunter-Reay in the #55 Mazda is trying to close down the #5 JDC-Miller car now steered by Joao Barbosa.

In LMP2, PR1 Mathiasen Motorsports continues to dominate, Gabriel Aubry running 85sec ahead of Nicolas Lapierre in the Tower Motorsports by Starworks car which is under pressure from Harrison Newey in the DragonSpeed entry.

In GTLM, Jesse Krohn, who had started his stint in the #24 BMW M8 ahead of the two Porsches, largely thanks to a great few stints from Chaz Mostert, restarted from third, back behind the 911 RSR-19s.

At the restart Krohn and Nicky Catsburg in the #3 Corvette C8.R demoted Laurens Vanthoor’s #912 Porsche and started tackling leader Nick Tandy in the #911. Two laps later, Krohn made his pass stick.

With 5h45m elapsed, the very impressive Catsburg levered his way past Tandy using GTD traffic to grab second. A few laps later Tandy tried to replicate the move, but the Corvette retained second, albeit now 4sec behind Krohn’s BMW.

However, next time by, Catsburg drifted slightly up and into the GTD #98 Aston Martin of Pedro Lamy causing both to spin briefly into the Turn 1 run-off. The cars were relatively undamaged, although Lamy’s co-driver Ross Gunn struck the wall on pitlane exit after a checkover.

As the sixth hour clicked by, Krohn retained the lead for BMW ahead of Vanthoor who edged teammate Tandy for second.

The #25 BMW is last in class after Bruno Spengler ran over debris and needed a fractured oil line repaired.

During the caution period, the GT Daytona-class dominating Pfaff Porsche 911 GT3 R was seen running excessively slowly, and that allowed Corey Lewis of Paul Miller Racing to slot the #48 Lamborghini into the lead, with Lars Kern down to second.

At the green flag, Parente passed Kern to grab second, while Toni Vilander moved the Scuderia Corsa Ferrari 488 GT3 into fourth. In fact, the Finn’s momentum kept going and past the 5h30m elapsed mark, he took the lead from Lewis.

Just a little further back, Sven Muller in the Black Swan Racing Porsche had passed the similar car of Kern for third in class, and van Gisbergen has now moved the Lexus ahead of Parente’s Acura for fifth. However, the next round of GTD pitstops are starting now.