A drive-through penalty for Kamui Kobayashi's Cadillac and a clash between Harry Tincknell and Helio Castroneves have left Olivier Pla’s Mazda in a commanding lead after four hours in the Rolex 24 at Daytona. 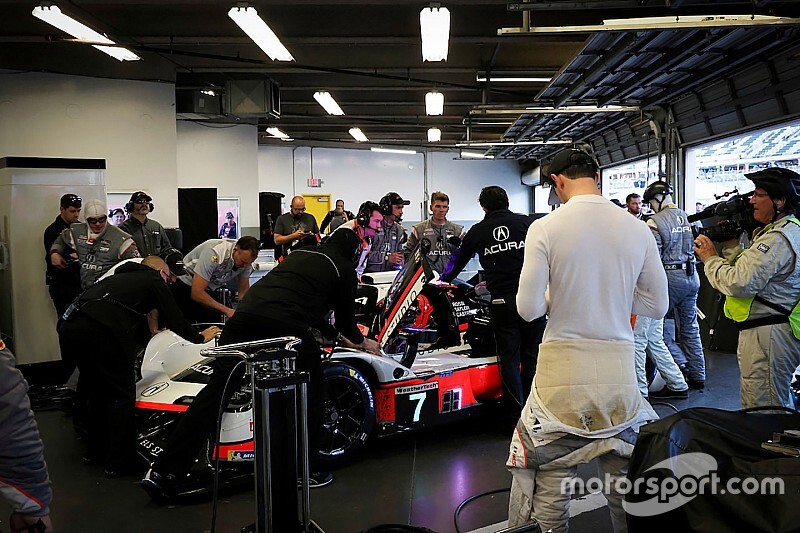 Kobayashi’s Wayne Taylor Racing Cadillac DPi-V.R outbraked Tristan Nunez’s #77 Mazda RT24-P for the lead on Lap 101, with 2h46min of the race done, and 15mins later Nunez stopped with a 3.5sec deficit to the leader. The WTR stop seven laps later saw Kobayashi emerge on cold tires just ahead of the #77 Mazda and Nunez needed no invitation to dive past the Cadillac into the Bus Stop chicane to regain the lead.

Then the axe fell from Race Control – Kobayashi had sped on pitlane and received a drive-through penalty. He came out in sixth, 40sec off the lead.

His cause was suddenly helped when the #55 Mazda of Tincknell tried an overambitious maneuver down the inside of Helio Castroneves’ #7 Acura at the Bus Stop chicane. The pair clashed and while the Mazda spun onto the grass, the Acura went hard into the tire barrier. Somehow a caution period was avoided, but while the Mazda drove off and pitted immediately, Tincknell was given a drive-through penalty. Castroneves, now without a rear wing, drove straight to the garage for repairs and eventually alighted, furious. He has now rejoined but 20 laps off the lead.

This drama has left the #77 Mazda of Olivier Pla leading Renger van der Zande in the WTR Caddy by 23sec, after Kobayashi spent many laps trying to battle past Sebastien Bourdais in the #5 JDC Miller MotorSports entry, which is now being steered in third by Loic Duval.

The Action Express Racing Cadillac is fourth with Filipe Albuquerque at the wheel, ahead of the #6 Acura which now contains reigning Indy 500 champion Simon Pagenaud. Tincknell has handed his Mazda over to Jonathan Bomarito.

PR1 Mathiasen Motorsports is still dominating LMP2 although Nick Boulle may struggle to stave off the Colin Braun-driven DragonSpeed entry over the next stint.

In GT Le Mans Chaz Mostert put in a superb couple of stints in the #24 BMW M8 and after 3h35min moved into second, splitting the hitherto dominant Porsche 911 RSRs when he passed the #911 piloted by Matt Campbell. Mostert is now within a second of the class lead, pressuring Mathieu Jaminet.

Nicky Catsburg runs fourth in the faster Corvette C8.R, chased at a distance by the second BMW of Connor De Phillippi, the second Vette of Marcel Fassler, and Alessandro Pier Guidi in the Ferrari 488 of Risi Competizione.

Alessandro Balzan in the Scuderia Corsa Ferrari 488 is fourth ahead of Anthony Imperato in the Wright Motorsports 911 and Mathias Lauda in the Aston Martin Vantage.