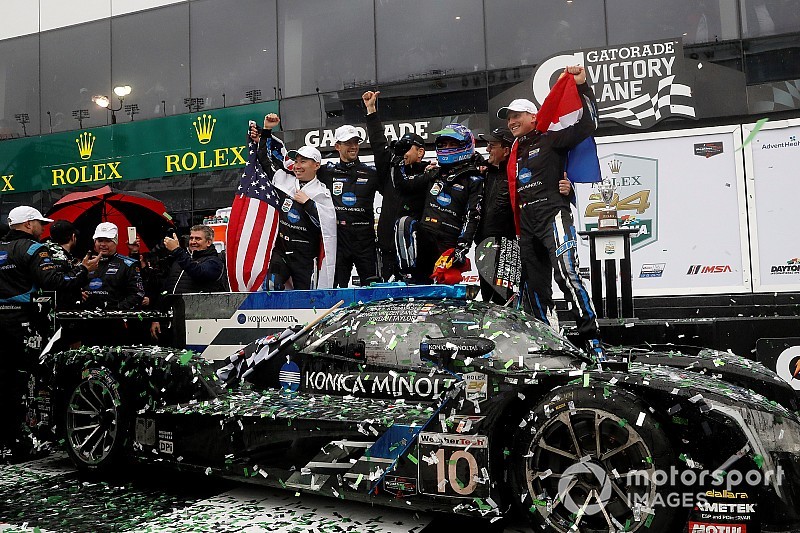 The Wayne Taylor Racing Cadillac team scored victory in a Rolex 24 at Daytona cut short by bad weather, as Fernando Alonso won the American classic at his second attempt.

Alonso and his teammates in the #10 Cadillac DPi-V.R, Renger van der Zande, Kamui Kobayashi and Jordan Taylor, were the prime beneficiaries of the worsening weather at the Florida circuit, which resulted in the IMSA WeatherTech SportsCar Championship season opener being red-flagged a second time with just under two hours to run.

Following more than 90 minutes of inactivity, It was finally decided to abandon the race after 23 hours and 50 minutes, with efforts to clear standing water from the track proving fruitless.

Shortly before the stoppage, two-time Formula 1 champion Alonso had taken the lead from the #31 Action Express Racing Cadillac of Felipe Nasr after the Brazilian ran wide at Turn 1.

That turned out to be the decisive move of the race, with ex-F1 racer Nasr, his new fulltime IMSA teammate Pipo Derani and Eric Curran being forced to settle for second.

Completing the podium was the #7 Acura ARX-05 of Helio Castroneves, Ricky Taylor and Alexander Rossi, which lacked the speed in the wet to challenge the leading Cadillacs in the final stages while IndyCar racer Rossi was at the wheel.

The arrival of rain overnight prompted an hour-long caution period, which was followed by the first red flag with a little more than seven hours left on the clock.

After an interruption of more than 90 minutes, racing resumed in a stop-start fashion as frequent caution periods were called amid various incidents in the treacherous conditions.

By this point, the race had boiled down to a contest between the WTR and #31 AXR Cadillacs and the two Penske-run Acuras, but the #6 car shared by Juan Pablo Montoya, Dane Cameron and Simon Pagenaud was ruled out of the fight with a loose oil pump belt in the 20th hour.

That promoted the CORE autosport Nissan DPi of Jon Bennett, Romain Dumas, Loic Duval and Colin Braun to fourth, although the #54 machine was four laps down on the leaders having suffered transmission problems shortly before half-distance.

A further three laps back in fifth place was the #85 JDC-Miller Motorsports Cadillac of Rubens Barrichello, Misha Goikhberg, Tristan Vautier and Devlin DeFrancesco.

Sixth place overall was the best of the LMP2 runners, the #18 DragonSpeed Oreca-Gibson of Roberto Gonzalez, Pastor Maldonado, Sebastian Saavedra and Ryan Cullen.

Saavedra appeared to have blown the #18 car’s chances when he suffered a heavy crash just before the red flags, but he was able to recover the stricken car to the pits to claim the win by four laps over the Performance Tech Oreca.

DragonSpeed’s other car, the #18 Oreca, had led the class for much of the race, but dropped out of contention when Henrik Hedman stopped out on track in the 22nd hour with a broken axle.

The #6 Acura ended up eighth and 17 laps down after its issues, ahead of the #5 Action Express Racing car of defending race winners of Joao Barbosa, Filipe Albuquerque and Christian Fittipaldi, who suffered a race to forget in his final Rolex 24 outing.

The Portuguese-speaking trio ended up ninth, 20 laps down, after a recurring issue with the rear lights that required a long trip behind the pitwall early on.

Mazda also suffered a double disaster with its pair of RT24-Ps, which both suffered reliability dramas within moments of each other before one-third distance.

The #77 car that Oliver Jarvis had qualified on pole dropped out with an engine failure, while the sister #55 car lost three laps with a fuel leak before finally bowing out after an incident involving a GT car in the early hours of the morning.

Six of the nine cars in class were still on the lead lap when the two leaders collided during a chaotic restart at Turn 1, as Frederic Makowiecki’s Porsche rear-ended Joey Hand’s Ford, effectively ruling both out of the fight.

That handed the advantage to the Risi Competizione Ferrari, but James Calado was passed by Farfus’s BMW shortly before the red flags came out for a second time, relegating Calado and teammates Alessandro Pier Guidi, Miguel Molina and Davide Rigon to second.

A pitstop for the #67 Ford just before the red flags dropped Richard Westbrook, Scott Dixon and Ryan Briscoe from the class lead to third.

That became fourth after the race, as a penalty for pitting under yellow dropped it behind the #912 Porsche of Earl Bamber, Mathieu Jaminet and Laurens Vanthoor, which was delayed near the end when Bamber spun and kept becoming wedged on the banking. He had to drive the wrong way around the track before finding a place to spin-turn.

Corvette Racing endured a miserable race in what could be the final Daytona appearance for the current-gen C7.R, with Tommy Milner aquaplaning the #4 car into the tyre wall early in the morning and the #3 car losing eight laps after stopping on track with an electrical problem.

Alex Zanardi’s #24 BMW was also removed from contention when the steering column was damaged in the pits on Saturday evening, before Jesse Krohn suffered a puncture overnight, necessitating a long trip to the garage.

Grasser Racing defended its 2018 GT Daytona class triumph, as Rolf Ineichen, Mirko Bortolotti, Christian Engelhart and Rik Breukers emerged on top in a frantic race-long battle in the #11 Lamborghini Huracan GT3 thanks in part to a late surge by Engelhart.

The #29 Land Motorsport Audi R8 LMS survived multiple spins in the wet conditions late on to take second, while the final place on the podium went to the all-American-crewed #12 AIM Vasser Sullivan Lexus RC F GT3.

Luca Stolz threw away a potential win for the #33 Riley Motorsports Mercedes-AMG GT3 with a late spin that demoted the Wynn’s-liveried car to seventh in class.

Roger Penske on Rolex 24: “I’ve never seen a race like this”