Luis Bacardi’s Rum Bum Racing impressed in its first ever outing in the Mobil 1 Twelve Hours of Sebring Fueled by Fresh From Florida on Saturday.

Sebring, Fla. – Racing in front of a record crowd on one of the toughest tracks in the country, Luis Bacardi’s Rum Bum Racing impressed in its first ever outing in the Mobil 1 Twelve Hours of Sebring Fueled by Fresh From Florida on Saturday.

The Florida-based team l`ed the race early, but saw the team’s chances at a podium thwarted first after an issue with the fuel pump set the team back in the pack, and then subsequently when IMSA penalized the team, costing the effort two laps. 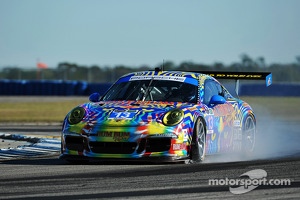 The championship squad, which was once again steered by Joe Varde with technical support from the accomplished Wright Racing organization, fought to earn the laps back and finish the race in ninth place with drivers Madison Snow, Hugh Plumb, Jan Heylen, and Matt Plumb combining to score a top-10 finish for Rum Bum Racing in its first-ever IMSA TUDOR United SportsCar Championship race.

“I think it just came down to a mechanical issue that we just didn't have a whole lot of control over,” said Matt Plumb, who also took a top-10 finish in Friday’s Continental Tire SportsCar Challenge event. “The guys just kept fighting to get everything back. We were close; the whole first half of the day seemed to be going our way. All it takes is something little (to go wrong). It always amazes me that more stuff doesn't go wrong with all of these moving pieces. Big thanks to Luis and Jennifer Bacardi for being here to witness the whole thing. I hope we can do it again some time.”

Sebring has long been known for beating up drivers and cars alike in its 61 previous runnings, but the 2014 edition proved to be unusually tough with a record number of cautions. The team’s efforts were also further thwarted by a procedural penalty that saw the No. 13 lose two laps while held on pit lane. While race officials then apparently subsequently rescinded the penalty, but the time, and nearly seven miles to the leader, was already lost. Using speed and strategy, the team worked hard to make up the lost ground, but ran out of time to move further up the field as the group once again impressed in tough circumstances, operating smoothly at the highest level.

“It was a harder race than Daytona,” said Snow, who with Heylen had opened the season with a run to third in the Rolex opener. “We had a couple more issues here but we kind of knew that going in. It's a bumpy track and it takes its toll on cars and drivers. We know we have the speed, and we’ve proved that. But we still pulled off a pretty good position, which is a pretty good place to be after 12 hours.”

A last-minute decision by IMSA officials about the continually evolving driver rankings saw Hugh Plumb drafted into the effort on short notice. But the experienced GT pilot slotted in seamlessly as he picked up on where he left off after first joining the team in Daytona.

“It was amazing,” said Hugh Plumb. “My hat goes off to the Rum Bum guys, who did a great job. We came into the pits in the lead twice in my two stints. Had it not been for this fuel pump issue, we would have been right there for the podium. It's unfortunate, but it's good. This was a brutal race and to come in and finish after that setback and compete in this GTD class with the speed that this team showed just underscored how strong Rum Bum Racing is. A huge thanks to Luis Bacardi for inviting me to be a part of it this weekend.”

“We came into the weekend a little bit behind from the test, but this team did an amazing job and it was great to work with everyone,” said Heylen. “We really had a perfect race as far as the job the drivers did and the effort from the team. We just had that one problem, and that was it. So it cost us a better finish but that is racing. Our car was very strong at the end and the performance was there, so I was really pleased. Now on to the next one!”

Rum Bum Racing will be back in IMSA action at Mazda Raceway Laguna Seca on May 3-4.