Beverly Hills, CA. Giacomo Mattioli, team principal of the 2013 Grand-AM Rolex GT champion Scuderia Corsa racing team today announced, “I am pleased to share with you that we will have a very talented group of drivers in our three cars at The Rolex 24 at Daytona.

Thanks to the Ferrari Factory, Toni Vilander will be joining Alessandro Balzan and Jeff Westphal in the #63 Ferrari 458 Italia together with Lorenzo Case’. John Farano and David Empringham will join Rod Randall and Ken Wilden in the #64. I am also pleased to have Francisco Longo and his Via Italia team returning to Daytona with us in the #65.”

"We are very excited to see such a strong representation for Ferrari at the Rolex 24 at Daytona, the historic first event of the TUDOR United Sports Car Championship," said Marco Mattiacci, President and CEO of Ferrari North America. "After winning last season's GRAND-AM GT championship and the second manufacturer's championship for Ferrari, Scuderia Corsa has assembled three strong contenders for Daytona and we look forward to watching the Ferrari 458 Italias aim for victory." 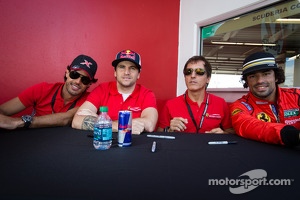 Giacomo Mattioli added, “I also would like to announce that Scuderia Corsa is proud to be the first racing team in the Tudor United SportsCar Championship Series to have implemented a voluntary carbon offset program. Developed with our new sponsor AitherC02, the program invests in environmentally significant programs to help offset the carbon footprint of our racing activities.

We are glad to support IMSA in their green efforts. Of course none of this would be possible without the continued support of our sponsors, Motorola Mobility, New Country Auto Group and Ultratech.”

For the 2014 TUSCC season, the #63 car will have two familiar faces behind the wheel, 2013 Grand-AM Rolex GT champion Alessandro Balzan returning along with Jeff Westphal who earned three podium finishes in five races with Balzan last season. Additionally, factory driver and 2012 24 Hours of Le Mans winner, Toni Vilander of Finland will join the lineup. Lorenzo Case’ will make his US debut after having finished second at the 24H of Le Mans this past June.

The #64 car will feature Dr. Rod Randall and long-time driving partner Ken Wilden for the 2014 TUSCC season. Randall and Wilden piloted the #64 to 6th place at this year’s Brickyard Grand Prix. Of his decision to return to Scuderia Corsa for the entire 2014 TUSCC season, Dr. Randall said, “Giacomo knows how to build a winning team and we are looking forward to a competitive year.” Rounding out the four-man driver roster for the #64 at Daytona will be Grand-AM CTSCC GS driver co-champions, John Farano and David Empringham of Canada.

The #65 car, being run in association with the Brazil based Via Italia racing team for the second consecutive year at Daytona, will once again be led by Francisco Longo with Daniel Serra, Xandinho Negrao and Marcos Gomes rounding out the lineup.

Next on the racing calendar will be the highly anticipated ROAR BEFORE THE ROLEX 24, from January 3-5, 2014 where teams will have one final opportunity to test and prepare their cars for the legendary Rolex 24 At Daytona taking place on January 25-26, 2014. This will mark the beginning of the newly formed Tudor United Sportscar Championship series, the entity created from the 2013 merger of Grand-AM and ALMS.

Patrick Dempsey to team with Andrew Davis in 2014 GTD