This marks the first time in eleven years that a team has taken the front row of the 24 Hours of Daytona.

Daytona Beach, FL. Expectations were high for the 2013 Grand-AM Rolex GT champion Scuderia Corsa racing team and they did not disappoint as they were awarded first row from race officials after today’s afternoon qualifying session. This marks the first time in eleven years that a team has taken the front row of the 24 Hours of Daytona. Scuderia Corsa also earned two class poles in Ferrari Challenge. 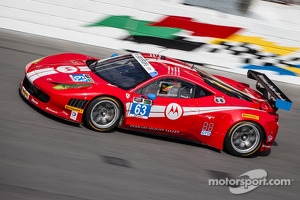 Of his team’s performance, team principal Giacomo Mattioli said, “What a great day! I am very proud of what Scuderia Corsa accomplished today. Our drivers did a fantastic job! GTD was a very close qualifying session and in the Ferrari Challenge Harry and Jon had a perfect run. It is an honor to have scored 3 pole positions within an hour in such an iconic race track like Daytona International Speedway”

Factory driver Toni Vilander, who earned pole result said, “with so little track time I was still pretty confident. I got in the car for practice and was on the pace immediately. The car was already good and we didn’t need to change the balance much. It’s good to see so many manufacturers so close in lap times. At the same time I’m really confident for the race. We drivers need to do a clear, solid job and so do the crew. We have a good chance for the race.”

Vilander in the #63 Ferrari joins 2013 Rolex GT champion Alessandro Balzan, Jeff Westphal and Lorenzo Case’. The #63 will be joined on the grid by both the #64 and the #65 run in association with Via Italia racing which was awarded P2 with Daniel Serra behind the wheel.

Of his pole Harry Cheung said “Qualifying couldn’t have gone any better today. The combination of a reasonably fast time and a well-timed red flag got me pole for the first race. I am stoked to try it again in tomorrow’s qualifying for Race 2”. Jon Becker who scored pole in Coppa Shell said “what an accomplishment to score P1 in the first qualifying session during Ferrari North America 60th anniversary at one of the world most historic venues!”

With qualifying complete, the legendary Rolex 24 At Daytona will start at 2:30pm EST on January 25, 2014. This will mark the beginning of the newly formed Tudor United Sportscar Championship series, the entity created from the 2013 merger of Grand-AM and ALMS. FOX will air the race from 2-4pm. Fox Sports 2 will air from 4-9pm. IMSA.com will stream from 9pm-7am. Fox Sports 1 will air from 7am-3pm.