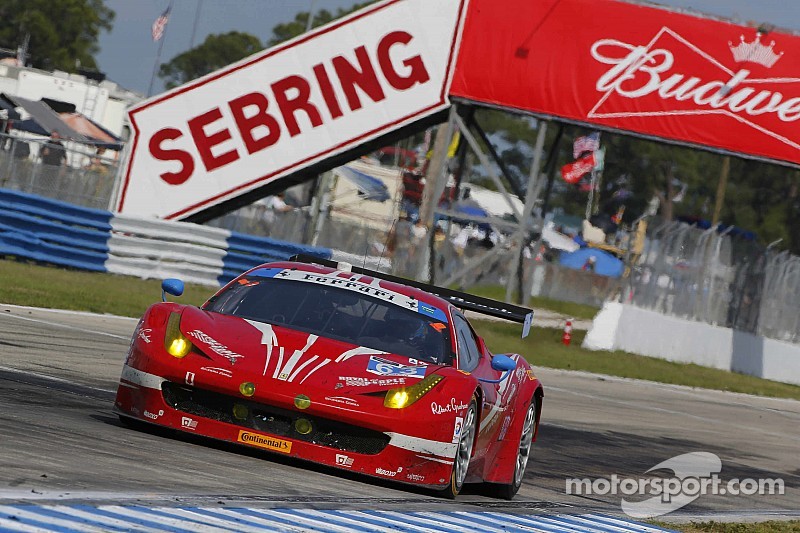 Sebring, Fla. - Facing a long and challenging day at the Mobil 1 12 Hours of Sebring Powered by Fresh from Florida, drivers Bill Sweedler, Townsend Bell and Anthony Lazzaro utilized the teamwork of Scuderia Corsa and the reliability of the Ferrari 458 Italia to grab a podium finish in the final minutes of the race.

After qualifying in 13th position, it was clear that the Ferrari 458 Italia would be facing an uphill battle on outright pace due to the latest adjustment of performance that overly punished the Ferrari plaform. The team committed to a strategy that would enable them to make the most out of the consistency and reliability of the Ferrari, with all three drivers needing to minimize any mistake during the twelve hour race. While other cars encountered incidents or mechanical failures, the Scuderia Corsa Ferrari steadily advanced up the field to challenge for fourth position in the final hour. When a leading GT-D class car had a mechanical failure in the closing minutes, Bell moved the Ferrari to third position just before the checkered flag.

We were in the right position to capitalize at the end of the race and we are able to leave Sebring with great points for our championship.

"In a way, we were fighting with one hand tied behind our back today," said Sweedler. "The Scuderia Corsa team executed flawlessly today with the right strategy and great pitstops throughout the race. And despite the fact that we are so heavy due to the additional weight of the latest BoP, the Ferrari platform performed extremely well throughout the changing conditions of the race. The guys fought hard all day long and Townsend, Anthony and I were able to keep the car in a good position all day. We are really thrilled with this result."

By finishing in third position, the no. 63 Scuderia Corsa Ferrari 458 Italia sits in second place in the GT-Daytona standings for the Tequila Patron North American Endurance Cup. Scuderia Corsa's result also enabled Ferrari to remain at the lead of the GT-D manufacturer standings in the NAEC.

"I finished the race with a triple stint, and it was quite a workout," said Bell. "But finishing on the podium makes me feel quite a bit better! We knew we would need to utilize all of our strategy and consistency to score a good result today, and this is a testament to the team's work. We were in the right position to capitalize at the end of the race and we are able to leave Sebring with great points for our championship."

"The team did a great job considering the circumstances that we had to deal with today," said Lazzaro. "Thankfully Bill and Townsend are able to leave here with a good result which will help their season-long championship, and I am glad that I was able to help them out."

Technical Director Roberto Amorosi, who guided the no. 63 Scuderia Corsa Ferrari 458 Italia throughout the twelve hours, was thrilled to celebrate on the podium.

"We felt all weekend that in order to score a good result and maximum points, everyone - the drivers, the crew guys, and the engineers - would have to execute perfectly," said Amorosi. "We were able to do that and stay on the lead lap during the entire race, putting Townsend in a position to capitalize in the final hour. I'm very proud of drivers and the team today, and now we look forward to our next race in Monterey."

Scuderia Corsa will compete next at the Pirelli World Challenge doubleheader on the streets of St. Petersburg, Florida on March 27-29 before the next round of the IMSA TUDOR Championship at the Continental Tire Monterey Grand Prix at Mazda Raceway Laguna Seca in Monterey, California on May 3. At Monterey, the team will host Ferrari VIP hospitality for team sponsors as well as clients from the local Ferrari Silicon Valley dealership.