The second race of the TUDOR United SportsCar Championship brought another exciting finish in the GT-Daytona class. Another close battle to the checkered flag involved the black no. 555 AIM Autosport Ferrari 458 Italia, the winning car from the Rolex 24 at Daytona, driven by Bill Sweedler, Townsend Bell, Maurizio Mediani and Jeff Segal. The car would just miss its second win of the season as it crossed the finish line second in the GT-D class in the Mobil 1 12 Hours of Sebring. 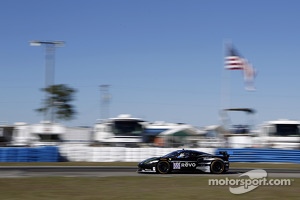 A caution in the final hour of the race set up a large battle for the GT-Daytona honors, with no less than six cars on the lead lap in the class. With Bell behind the wheel, the AIM Autosport Ferrari would hold off a challenge from behind over the final laps. With that result, Bell, Sweedler, and Segal maintain their championship lead in the GT-D class.

The no. 63 Scuderia Corsa Ferrari 458 Italia contended for the lead of GT-D during the first eight hours of the race, at times exchanging position with the no. 555 AIM Autosport Ferrari 458 Italia. Unfortunately, the team would lose time making repairs and would ultimately finish in 17th position.

Also having another challenging race was the Risi Competizione team, who built almost an entirely new car after Matteo Malucelli suffered a massive incident during the Rolex 24 at Daytona. After an incident in practice which caused further damage to the no. 62 Risi Competizione Ferrari 458 Italia, Malucelli was involved in another incident while leading the race which ultimately caused it’s retirement.

The next round of the TUDOR Series will be the Tequila Patron Showcase, part of the Toyota Grand Prix of Long Beach, on April 12.