Sebastien Bourdais says he was surprised he was able to hang on to claim victory for JDC-Miller MotorSports in the closing stages of the Sebring 12 Hours after the #5 Cadillac suffered rear wing damage.

JDC-Miller came through for what had seemed an unlikely victory in the second round of the IMSA WeatherTech SportsCar Championship season, having spent most of the race a lap down as a result of various incidents.

But, having clawed its way back to the lead lap by the end of Hour 10, the Mustang Sampling-sponsored #5 Cadillac DPi-V.R was promoted into the lead with a little over an hour to run following the collision between Scott Dixon's Chip Ganassi Racing Cadillac and a GT Le Mans class BMW that knocked the former out of contention.

Bourdais then had to contend with Harry Tincknell following the eighth and final caution of the race with around half an hour to go, and the Frenchman held on to score JDC-Miller's first win since the 2018 Six Hours of Watkins Glen by just 1.435 seconds in the car he shared with countrymen Loic Duval and Tristan Vautier.

But the IndyCar regular said that a late issue with the #5 car's rear wing made the task of defending from Tincknell and the rest of the tightly-bunched DPi no easy task.

Bourdais recalled speaking to NBCSN: "After the [final] restart I lost the rear element, and the center of pressure shifted about six or eight percent forward. I thought I was going to crash in the last corner, and I had no idea I would be able to drive it.

"I just went full-stiffness front bar, full-stiffness rear bar and just hung in there. But that thing was so quick, and then I thought we lost it because without the rear wing it was gone."

Both Bourdais and Duval earned their second Sebring 12 Hours wins, with Bourdais having previously won with Action Express Racing in 2015 and Duval's first triumph coming back in 2011 at the wheel of a diesel-powered, Oreca-run Peugeot 908 HDi FAP.

It came despite Duval getting tangled up in Jimmie Johnson's early spin at the wheel of the #48 Action Express Cadillac, and then Vautier being hit by Felipe Nasr in the other AXR car, the #31 machine, in the eighth hour.

"It was not an easy one," said Duval, who is embarking on his first full-time IMSA campaign this year alongside Vautier. "We got cars in our way a few times, like at Daytona, but in the end the pace was getting better and better.

"They said the track was coming to us and we got back into the lead lap. We saved some fuel to try and fight the other guys at the front. In the end we had the right strategy, Seb was on it, and you know how good he is when he feels comfortable with the car. That was it. It was a good team effort.

"We deserve it, we had so much bad luck, even last year here when we were fighting for the win also. Finally, to be able to get that for Mustang Sampling and Cadillac and JDC, it’s great." 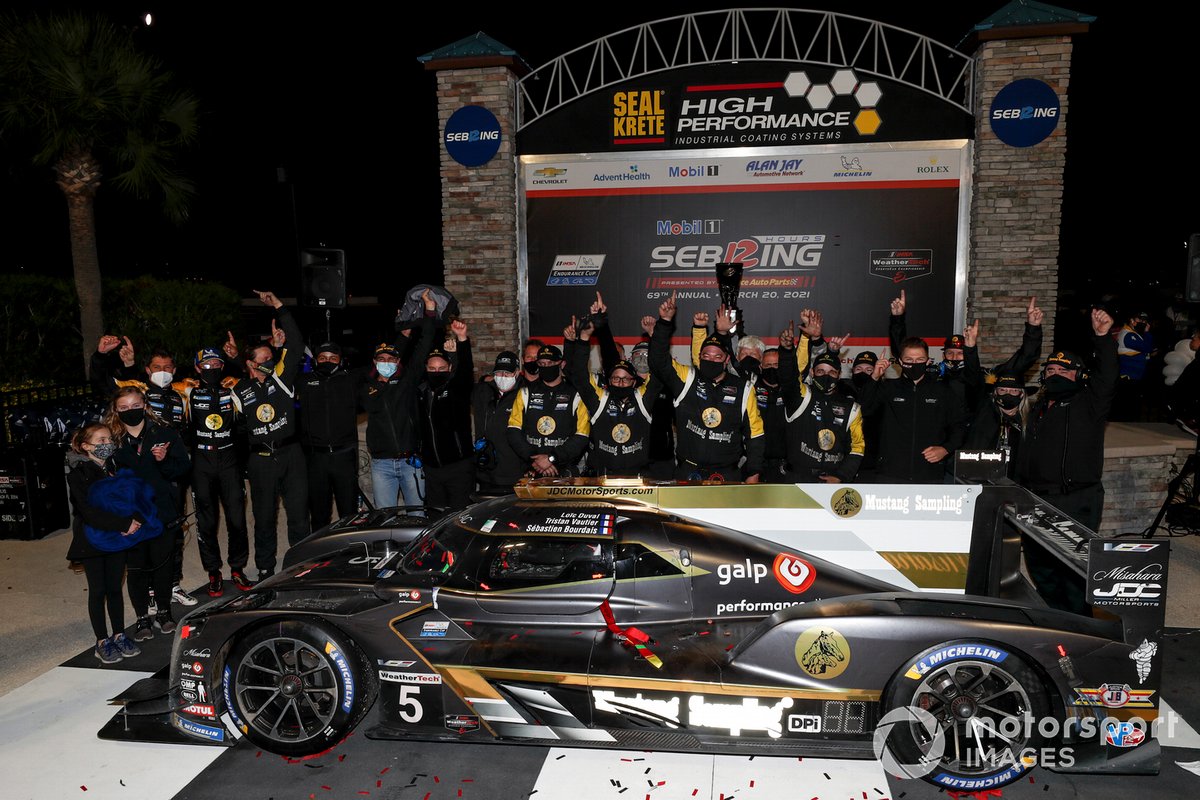 Bourdais believes Cadillac has the edge at Sebring