The result came as a disappointment for the team after having had an encouraging start to the event.

SEBRING, Fla. – After leading the race early in the event, Visit Florida Racing finished the Mobil 1 Twelve Hours of Sebring Fueled by Fresh From Florida 10th in class on Saturday with the No. 90 VISITFLORIDA.com Corvette DP. Drivers Richard Westbrook, Michael Valiante, and Mike Rockenfeller shared the driving duties in the 12-hour enduro. The result came as a disappointment for the team after having had an encouraging start to the event, leading early before suffering a mechanical setback that cost the group crucial time. 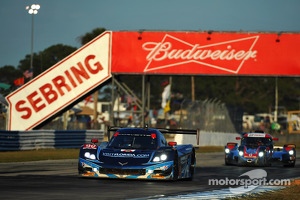 After qualifying seventh on the 64 car combined-class field on Friday, Westbrook ran in the top-10 in the opening segments before turning the car over to Valiante on a lap 42 pit stop. The Canadian improved to circulate in the top five before moving to the lead on lap 76, holding the point through a yellow flag restart and then continuing in the top-five before turning the car over to Rockenfeller, who rejoined in third place as the race entered the fifth hour.

Unfortunately, the effort suffered a significant setback as Rockenfeller coasted to a halt on the back stretch shortly thereafter, bringing out a yellow and necessitating a stint back at the team transporter. The crew diagnosed the issue, which was an electronic element connected to the throttle controls, and set about making repairs. The team turned the car around quickly, but the effort still cost the team over 15 laps to the race lead.

Determined to make the most of the outing, and knowing that there were still lots to learn and accomplish over the course of seven more hours of racing, Visit Florida Racing continued to log laps and fight to the finish for a hard-earned top-10 finish.

“There are so many new components on these cars, and even though we had the 24 and some testing, we are still finding the limit with some of these components and that caught us out today with the VISITFLORIDA.com car,” said team owner Troy Flis. “We had a good car, led the race and we were hoping for a whole lot more. But after that, our race was all about just doing laps and getting to the finish. We had an awesome group of VISITFLORIDA.com guests here and we were hoping to have them see us celebrate with some Orange Juice in victory lane. Our performance was good, but it just wasn’t our day with that one issue.”

“We were hoping with two huge races in Florida, being in the Visit Florida car, to get a bit of home luck,” said Westbrook, who won the event in 2013. “The car was decent but we had a problem with the fly by wire which is no fault of the team or anything like that. It's just one of those things. It's a new part and that put us out of contention. There wasn't really much we could do apart pray that people drop out! But the attrition rate wasn't the normal for Sebring, in the Prototype cars anyway. We got some points but we've got to just forget about this weekend and get back to our winning ways. But it's been a really tough week for us. It's given us something to think about. We've got to work hard and bounce back strong in Long Beach.”

“I don't think we had the car to win today but maybe top-four,” said Valiante, who also competed in the Continental Tire SportsCar Challenge race held on Friday at the track. “We raced well early but just had that part fail and that was the end of our day competitively. We just kept working on the car though and we got enough laps in to come out with a top-10. That’s not what we were hoping for, but the team did a great job all week and getting the car back out there to keep going. We were flawless after that. So we will just focus ahead now.”

Visit Florida Racing will be back in race action across the country as the team looks forward to the high-profile Long Beach Grand Prix April 11-12.