The No. 93 SRT ® (Street and Racing Technology) Motorsports Viper GTS-R team, and drivers Jonathan Bomarito, Kuno Wittmer and Rob Bell, put together a perfect race in Saturday's 62nd Annual Mobil 1 Twelve Hours of Sebring Fueled by Fresh from Florida to score a second-place finish that was just one unlucky break away from a victory.

The No. 93 joined the sister SRT Motorsports No. 91 Viper GTS-R team in taking turns leading the GTLM class in the half-day race on the classic 3.74-mile road course. Dominik Farnbacher, who teamed with fulltime co-driver Marc Goossens and IndyCar Champion Ryan Hunter-Reay, twice led in the No. 91 and joined his co-drivers for a seventh-place finish. All three No. 93 drivers led at various points in the race, including Bomarito in the race's final hour. 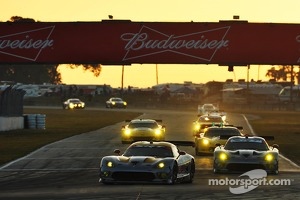 It appeared Bomarito had the pace to hold off the competition but the 11th and final caution of the race 50 minutes from the finish sent the No. 93 and most of the competition to the pits for the last time. That gave the edge to the No. 912 Porsche that had been running second to the No. 93 only to pit under green just before the yellow flag flew. When the race went green again, the Porsche's lucky break gave it enough track position to hold off a fast closing Bomarito. Despite knocking off almost a second a lap on the gap to the Porsche, not enough time remained on the clock for Team SRT to get back to the front.

The runner-up result was the best of the year for SRT Motorsports in the two-race old 2014 IMSA TUDOR United SportsCar Championship season. Goossens, Farnbacher and Hunter-Reay also visited the podium in the No. 91 in the season-opening Rolex 24 At Daytona in January with a third-place showing.

The No. 91 matched the pace of the No. 93 at Sebring but Hunter-Reay spun in Turn 17 early in the second half of the race and backed into the tire wall. The SRT Motorsports crew repaired the Viper and got it back in the race but the team and drivers only had enough time left to recover two of the four laps lost in the delay.

Ralph Gilles, SRT President and CEO
Please share your thoughts on another SRT Motorsports podium and a great race in total?
"The performance of the SRT Motorsports car was flawless, absolutely flawless all day. I just couldn't believe how close the race was. For almost 12 hours there was less than 20 seconds separating the top-three. It was probably the most exciting race I've seen yet."

Jonathan Bomarito, driver, No. 93 SRT Viper GTS-R
Your car doesn't have a scratch on it. How many competitors can say that out there today?
"Not many by the looks of it. That was a brutal, really tough race, but Kuno and Rob had amazing, amazing drives. The crew, I can't say enough for all of their efforts today. Our pit stops were flawless as were Matt and Jim on the pit box and with the engineering. We didn't have a very fast car when we started this race in the heat of the day. Every single pit stop we made a change to the race car. Whether it be a sway bar, rear wing, tire pressure, we just kept pushing forward all day long and we had one of the best race cars at the end. If it wasn't for that yellow it's a shame because I really would have wanted to truly have a fight for it at the end. But I'm incredibly pleased by the effort and satisfied, but I feel like we had it, but we just missed it by a little bit."

Kuno Wittmer, driver, No. 93 SRT Viper GTS-R
You all were looking really good out there, holding your own, leading and almost won. How do you feel about the performance?
"The plan was going as we established at the beginning of the race. We weren't the quickest car out there, but the team was working so hard not to make any mistakes on pit lane, and as drivers we were doing everything we could not to put a scratch on the car. That's how you win a long distance race and we almost did. When I was out there, I was just running with a big grin on my face the entire time, having fun doing literally qualifying laps back to back to back to back. When we came into pit lane we kept doing small little chassis adjustments for the better and that's legal, so it's only fair game."

Rob Bell, driver, No. 93 SRT Viper GTS-R
The car was running well, you had a great race, just a little bit of bad luck with that yellow?
"Given the week we've had we didn't feel like we had the overall package, so to be fighting for the win exceeded our expectations. We hung in there and everyone did a great job on the 93 car. To be leading and looking sharp and then to have the safety car, luck wasn't on our side. Porsche made the most of it. There's a tinge of a little bit of disappointment to have lost the lead in unlucky circumstances."

Marc Goossens, driver, No. 91 SRT Viper GTS-R
You were down four laps after the incident but you managed to get two laps back. Talk about how you did that?
"Well, obviously it shows again that SRT is really strong in strategy, knowing where to place us. I told Bill Riley after my first stint, if we can stay out of trouble at the end of the race, then the conditions and the race are going to come to us because I had a strong feeling that the car at night was going to be very good. This has been proven by both the 93 and the 91 because Dominik was putting in some great lap times. I think we had a decent car for the race, maybe not so much in qualifying. I think we could have been second and third or second and fourth, but it wasn't meant to be."

Dominik Farnbacher, driver, No. 91 SRT Viper GTS-R
How do you keep your focus when you know you're out there just trying to get laps and points after an incident?
"You just continue. The championship has a good point system. If you do a bad race you still get good points. We collected good points. I think for the North American Endurance Championship for the first four hours we were first. So these were good points for us so we can also be happy about that. The car was running good even though it was bent and crooked. It was not far away from the fast pace. I just want to thank my team for working hard and getting the car back into the race, even if it looked a little weird at the end. It was not the prettiest car, but it still drove. Other than that, it was a good race. I'm proud of my teammates. Ryan and Marc did a fantastic job. It was not our best race, but Long Beach will be better."

Ryan Hunter-Reay, driver, No. 91 SRT Viper GTS-R
What happened in the incident? It looked like the back end got away from you.
I started out decently and then I was struggling to hang on to the car the entire time. I was doing my best but I just lost the rear of the car braking into Turn 17. I caught it a couple of times, and then just lost it. I got into the tire barrier and continued on. I could feel something wasn't quite right with the right rear and came in and the diffuser was down on the right rear. That's a lengthy repair that put us four laps down."

Matt Bejnarowicz, SRT Motorsports Viper Racing Lead Engineer
Give us your thoughts on today's race result?
"I don't know if we were the fastest car out there, but we definitely had Viper reliability. We had Viper consistency. The crew and the drivers we ran a perfect race. We were fighting for the lead, I think we could have had a shot for the top spot at the podium, but we ran into a bit of bad luck by about 10 seconds. It was definitely a challenging weekend the whole way and the team really pulled together. We came into the weekend with pretty high hopes and we kept on working on it and stayed clean and we made it to the end."