Both the No. 91 and 93 Viper teams led circuits in the race's opening hour with first-stint drivers Goossens and Bomarito, respectively.

The SRT ® (Street and Racing Technology) Motorsports Viper GTS-R teams set the early pace in the opening hours of the Rolex 24 At Daytona with all six drivers leading the GTLM class during their respective stints, but both race cars experienced issues as the endurance event worked toward the halfway mark.

Approaching the ninth hour of the race, Jonathan Bomarito guided the No. 93 SRT Viper GTS-R into the top-10 overall and paced the GTLM entries. The sister No. 91 SRT Viper GTS-R was running at an equally strong pace, only to suffer a power steering line failure that sent the car and driver Marc Goossens to the garage. 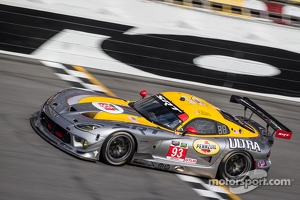 Following repairs and a brake change in a quick, 15-minute stop by the SRT Motorsports team, the No. 91 returned to the race only to see the No. 93 unexpectedly enter the pits for repairs following a contact incident that left the car with heavy front end damage. Following more quick work by the SRT crew, the No. 93 Viper returned to the track only six laps behind the GTLM leader.

The No. 91 fell 10 laps down after the power steering fix and both teams began working to gradually gain back laps lost during the repair process after remedies to both SRT Viper GTS-Rs.

The setbacks came after both SRT Viper GTS-R teams appeared to be early favorites to contend for the GTLM victory prior to the incidents. The No. 91 Viper started the race from the GTLM pole with Goossens and the No. 93 worked its way to the class lead in the race's first hour. Each driver for the SRT Motorsports teams led the GTLM class during their first stint in the racecar.

Kuno Wittmer, driver, No. 93 SRT Viper GTS-R
What is the strategy following the repairs to both cars?
"It's a shame. Things were going really well and then we had problems with both cars. There's still a lot of time, but it's going to be hard to make up five laps."

How bad was the traffic early in the event?
"It is what it is and you'll have gentleman drivers and you'll have factory drivers like ourselves. It's difficult to go through this entire race and not put a scratch on the car - that's the plan - and so far we're doing pretty good. It's definitely difficult out there with all the traffic. There's a big speed gap when it comes to the braking zones. We can literally pass any of the GTD cars on the outside - that's not an issue - but it's the speed gap that they're not anticipating. Sometimes you think their eyes are in their ears instead of in their head going forward. It is what it is and this is world class racing and we'll give it our best."

Jonathan Bomarito, driver, No. 93 SRT Viper GTS-R
What caught your attention during your first stint?
"There's a line of GTLM cars. We kind of for the first time got to see the strengths and weaknesses of our competitors. We ran up front for I think the majority of the first stint we were right there pace wise. It's a long race. I think one of the biggest things I noticed straight away is traffic. It's very, very difficult and you have to be not just one step ahead, but three or four and I think that the car that can manage that the best will be there at the end. I think we will see more attrition than I thought and that's probably going to be from car-to-car contact."

Were you surprised how aggressive the drivers were in the first stint?
"It was pretty aggressive. The pace was definitely high, intensity level was high. Some of the moves from competitors and cars in front of me were very aggressive, I think you're right there. I think it kind of comes down to why are the intensities that high is that the cars - you know everybody's real confident in the cars making it. You can drive them a hundred percent and mechanically the cars are capable. It's just a matter of the cars staying up front the whole time and I think you're going to see this race going '10-10' with driver pushing that hard the whole 24 hours."

Dominik Farnbacher, driver, No. 91 SRT Viper GTS-R
How was your first stint in the SRT Viper GTS-R?
"There are a lot of things going on out there. There's a lot of debris, a lot of cars spinning, many people not really paying attention. We're doing a good job so far. Now we're trying to keep being on the lead lap until the end."

How bad was the traffic?
"Without saying any names, some of the people out there they don't know where to go and it was really hard just to guess where they would go. There was a few times I really had to brake down into first gear in the bus stop in order to get somebody because they didn't know where to go. Other than that, if we keep it clean we should be okay."

How have you been able to develop the car since ALMS competition?
"So far we are driving the same car we drove last year. Of course we developed a few little things here or there, but it's more or less the same car we had last year. We're looking for things we can improve compared to last year, but our car straight out of the box is very strong and I just hope it stays reliable and so far it is."

What happened with the early miscue on pit road?
"When I came in we usually leave the engine running, but by accident I turned off the engine because last year we turned off the engine during pit stops and I was still in that rhythm. I know I have to be careful next time and not turn off the engine. Ryan Hunter-Reay couldn't find the ignition - the start button - and that's why we lost a few positions, but we're still on the lead lap and as soon as there is a safety car we're back in business."

Marc Goossens, driver, No. 91 SRT Viper GTS-R
How was your opening race stint?
"There were a couple of close calls during the race with traffic and especially in Turns 1 and 3 at the start of the race. So rather than try to dive underneath people, I decided to back off. There seemed to be a big traffic jam. Everybody lost some time except the No. 93 car. It took a couple of laps to get back behind Jonathan (Bomarito), but then with both Vipers we got quite a bit of a cushion over the others. Driving slightly defensive in order to keep track position and try to settle into a nice rhythm, which worked out for us during the first stint. The call we made for tires for the second stint seemed to be a little less consistent, so it was a little bit harder work in the second part of my first double stint but we kept hanging into the lead."

Krohn Racing in mid-way of Rolex 24 at Daytona