The No. 91 Viper shared by Dominik Farnbacher, Marc Goossens and Ryan Hunter-Reay held the class lead, giving them five points in the first Patrón Endurance Cup segment. Second at the four-hour mark was the No. 4 Chevrolet Corvette C7.R of Corvette Racing shared by Oliver Gavin, Tommy Milner and Robin Liddell, with four points. 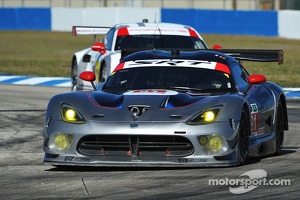 Third at the four-hour mark was the GTLM pole-winning No. 912 Porsche North America Porsche 911 RSR shared by Patrick Long, Michael Christensen and Joerg Bergmeister. The team earned three points toward the $100,000 prize to be awarded at the end of 52 hours of TUDOR United SportsCar Championship endurance racing at the Petit Le Mans powered by Mazda at Road Atlanta on Oct. 4.

All other GTLM competitors in the Sebring field earned two Patrón Endurance Cup points at four hours. The next segment ends at the eight-hour mark, with the third and final segment ending when the checkered flag flies at 10:15 p.m. ET tonight.

No. 94 BMW Turner Motorsport Team Battles Back To Lead GTD At Four Hours

The No. 94 BMW team of Turner Motorsport has ridden a bit of a roller coaster over the past 24 hours, but experienced the thrill of leading the GT Daytona (GTD) standings in the Tequila Patrón North American Endurance Cup at the four-hour mark in the Mobil 1 Twelve Hours of Sebring Fueled by Fresh From Florida.

Driver Dane Cameron put the No. 94 machine on the class pole position in Friday’s qualifying session, which was cause for celebration. However, the start of the race placed him and co-drivers Paul Dalla Lana, Markus Palttala and Shane Lewis into an early hole as they started from pit lane; the car was still in the pits when they closed prior to the race.

Despite the setback, the team battled back to put Cameron and the No. 94 BMW at the front of the pack at the one-third distance. As a result, the No. 94 team earned the maximum five points toward the $50,000 GTD Patrón Endurance Cup at season’s end.

Second in class after four hours was the No. 63 Ferrari from Scuderia Corsa co-driven by Alessandro Balzan, Jeff Westphal, Kyle Marcelli and Lorenzo Case. As a result, this team is four points richer in the Patrón Endurance Cup standings.

The No. 44 Porsche 911 GT America from Magnus Racing was third at four hours in the hands of John Potter, Andy Lally and Marco Seefried. They earned three points.

Joey Logano is no stranger to confrontation

Joey Logano is no stranger to confrontation