One of the most beloved IMSA racecars of the past 30 years, the Audi 90 quattro, will be paid homage in next week’s Rolex 24 at Daytona by Starworks, who will run its GT Daytona class R8 in similar colors.

The R8 LMS, to be piloted by Ryan Dalziel, Parker Chase, Christopher Haase and Ezequiel Perez Companc, will join the plethora of throwback liveries in the 2019 WeatherTech SportsCar Series season-opener, as tribute to IMSA’s 50th season.

But the now-familiar shape of the R8 will be adorned with what became the classic yet subtle Audi Sport colors from the 1980s – mainly white, with burnt orange/gray/black trimmings.

This is aping the colors of the wild Audi 90 quattro that graced the GTO class in IMSA in ’89, and which became a firm fan favorite among GT fans, in much the same way as had the BMW CSL ‘Batmobile’ and the various iterations of Porsche 911 or Chevrolet Corvette.

The previous year, the ferocious ex-Group B quattro rallycar combo of 700hp 2.2-liter engine with all-wheel-drive, dropped into an Audi 200 shell, had seen Hurley Haywood clinch the Trans-Am title, and a combination of Haywood, Hans Stuck and Walter Rohrl won eight of the 13 T-A races that year.

All-wheel-drive was promptly banned by Trans-Am’s governing body, the SCCA, but that mattered little – Audi was switching to IMSA for ’89.

Now dropping a similar unit into a tube-frame chassis sheathed in the smaller 90 model’s silhouette, Audi produced one of the most formidable racecars of all time.

Ironically, considering the Starworks team’s tribute, the 90 did not compete in either the Daytona 24 Hours nor the Sebring 12 Hours that year, since Audi North America wasn’t confident its sprint race weapon was durable enough.

That decision probably cost the brand the IMSA GTO Manufacturers’ crown (won by Roush Mercury), but Stuck mastered the beast in inimitable style and won seven races to easily clinch the Drivers’ crown. 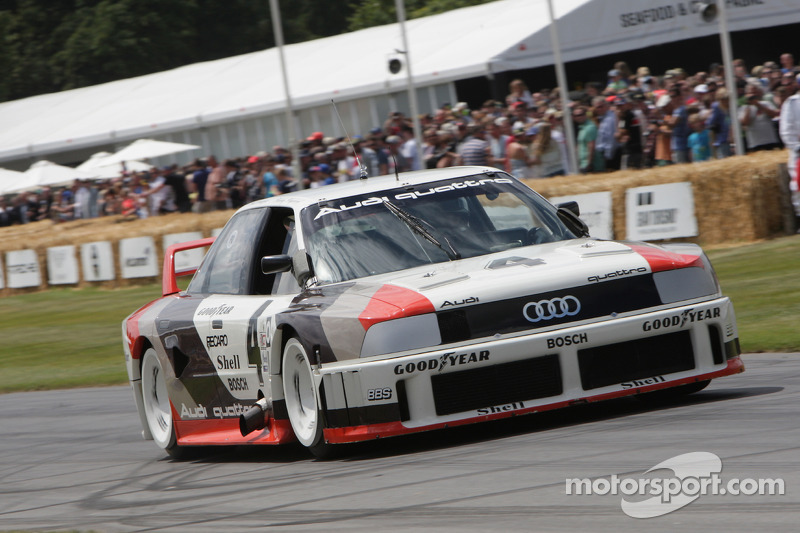 Starworks pulls out of IMSA’s Road America round