In front of its home crowd, the pair of bright red Scuderia Corsa Ferrari 458 Italias thrilled the fans and guests Ferrari Silicon Valley on Sunday as they finished seventh and tenth in the Continental Tire Monterey Grand Prix Powered by Mazda at Mazda Raceway Laguna Seca.

The is weekend was a home event for Scuderia Corsa, as owners Giacomo Mattioli and Art Zafiropoulo also own Ferrari Silicon Valley in Redwood City, and the team would be competing in front of hundreds of family members, friends, and guests from the dealership. In the first half of Sunday morning's two hour race, the starting drivers for Scuderia Corsa enjoyed strong performances as Stefan Johansson advanced from fourth to second place in the no. 64 Scuderia Corsa Ferrari 458 Italia while Jeff Westphal, from nearby San Francisco, made several passes to jump from 13th position to fourth in the no. 63 Scuderia Corsa Ferrari 458 Italia.

After being slowed by a penalty, Alessandro Balzan took the checkered flag in seventh position in the no. 63 Scuderia Corsa Ferrari 458 Italia.

"Seventh isn't the result we ordinarily like, but we achieved the maximum result possible with the current specifications today," said Balzan. "Over the course of a stint, we were unable to match what the others could do. I was on the limit each lap, driving as hard as possible, because that is what the team asks me to do! If we didn't have the penalty, we may have been two positions better, but the team gave Jeff and I the best Ferrari possible today." 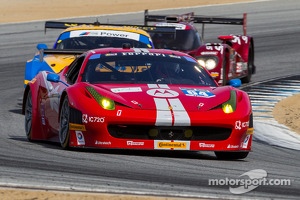 Kyle Marcelli, making his second start with the team, took over the no. 64 Scuderia Corsa Ferrari 458 Italia and finished in 10th position.

"The result was frustrating because the race started out well and we had a great Ferrari during practice and qualifying," said Marcelli, who qualified the no. 64 Scuderia Corsa Ferrari 458 Italia in fourth position. "When I got in the car, for whatever reason, I picked up an understeer that just wouldn't go away. It was really crippling here at Laguna Seca so after that, I just did my best to keep the car on the track and get the best finish we could."

After two challenging races in Daytona and Sebring to start the season, the Scuderia Corsa Ferraris had weekend free of bad luck. However, the team was looking for speed that it ultimately did not find in the second half of Sunday's race.

"Our drivers and team put together a really strong effort today, but unfortunately we knew that Laguna Seca was a track that is not currently suited the strengths of the Ferrari 458 Italia," said Roberto Amorosi, Technical Director for Scuderia Corsa. "If not for the penalty, we may have improved one or two positions, but our drivers and team produced the most speed we could have gotten today."

As part of the weekend's festivities, dozens of guests from Ferrari Silicon Valley enjoyed a day at the races. The team's owners were thrilled to showcase the Scuderia Corsa team to over 80 clients of the dealership, as well as dozens of guests from sponsors Motorola Mobility and Ambiente Group. "I am pleased of how our team and drivers performed today," said Art Zafiropoulo, co-owner of Scuderia Corsa and co-owner of Ferrari Silicon Valley. "Stephan and Jeff did an incredible job in the first hour to pass so many cars, but it was clear in the second hour that we didn't have quite enough for the other cars in the field. But we enjoyed a wonderful day here at Laguna Seca, our guests had a great time, and it was a wonderful day for Ferrari Silicon Valley and Scuderia Corsa."

Heartbreak for Pumpelly in Monterey