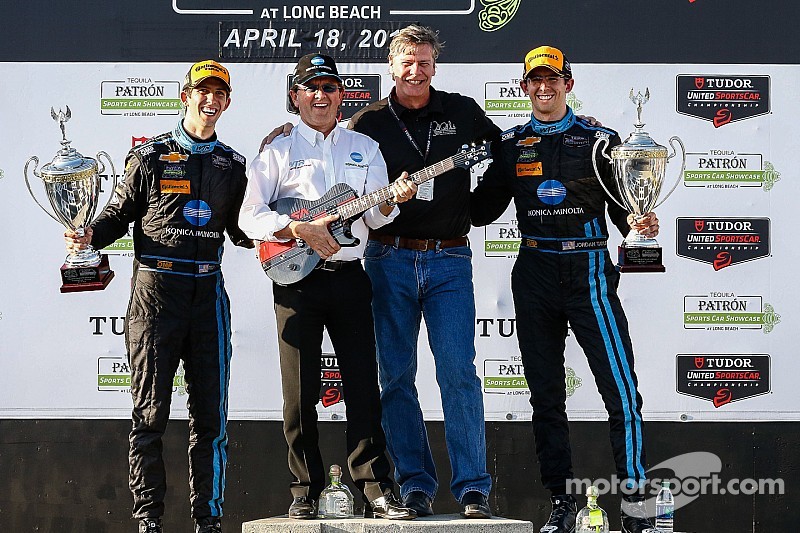 LONG BEACH, California – One of the appealing aspects of the TUDOR United SportsCar Championship series is the variety of the races – the season opener was the Rolex 24 Hours at Daytona, followed by the Mobil 1 Twelve Hours of Sebring, then the Tequila Patron Sports Car Showcase on the tight Long Beach seaside stret course.

Does that make a lot of difference?

Apparently not, as cream rises to the top, no matter if it takes 100 or 1,400 minutes. The overall winner, the No. 10 Konica Minolta Chevrolet Corvette Daytona Prototype of Wayne Taylor Racing, driven by Taylor’s two sons, Ricky and Jordan, has been strong all year but hasn’t managed a victory.

The weekend started well for the team, though, as Ricky Taylor qualified the car on the pole, his first pole since the TUDOR Championship debuted in January, 2014.

It was a welcome redemption for the No. 10 Corvette, which suffered a penalty for a violation of driver’s time behind the wheel and was dropped to a 52nd-place finish in the 53-car field. The team rallied back to a second-place finish at Sebring.

Fourth was the Action Express Whelen No. 31 Corvette DP, followed by its team Corvette, which was limping with powertrain issues – that car was second at Daytona and first at Sebring, so fifth has to count as a disappointment.

In GT-Le Mans, the victory almost went to the No. 62 Risi Competizione Ferrari F458 Italia of Pierre Kaffer and Giancarlo Fisichella, especially impressive since Fisichella, in a rare mistake, brushed the tire wall Friday at the end of a practice session, damaging the Ferrari’s left side.

The team managed to repair the car well enough for Fisichella qualify the car in third less than 30 minutes later, and obviously fixed it even more comprehensively before the race, as it took the lead a hundred yards past the green flag from polesitter Bill Auberlen in the No. 25 BMW Team RLL Z4 GTE and the second-place car, the No. 24 team BMW driven by John Edwards.

With just over 12 minutes left, though, the No. 25 BMW, driven by Dirk Werner, passed the No. 62 Ferrari, driven by Fisichella’s teammate, Pierre Kaffer, when Kaffer’s tires appeared to wear to the point where the Ferrari’s lap times were slowing substantially.

Meanwhile, Lucas Luhr, driving the No. 24 BMW, was charging into third place when he missed a turn, dropping several positions to fifth in class. Third was the No. 3 Chevrolet Corvette C7.R of Jan Magnussen and Antonio Garcia. The GTLM class-winning No. 25 BMW of Auberlen and Werner was seventh overall.

The race was surprisingly carnage-free, given the tight quarters. On the first lap, the only major event had the No. 912 Porsche 911 RSR GT-Le Mans car driven by Richard Lietz squeezed into the wall by the No. 4 Chevrolet Corvette C7.R GTLM driven by Olivier Gavin, requiring major work to the Porsche’s right front wheel unit. The No. 4 finished 14th overall.

It essentially took the No. 912 out of contention, finishing 16th of the 17 entries – last place was unfortunately claimed by the Claro/TracPhone DeltaWing, which was making its street course debut, as the car has only raced before on larger, wider road courses. The DeltaWing retired less than a third of the way in with transmission issues.

Next up: The (160-minute) Continental Tire Monterey Grand Prix Presented by Mazda at Mazda Raceway Laguna Seca May 2-3.