The Ligier JS P2s and the JS 53 EVO 2s the quickest this weekend! 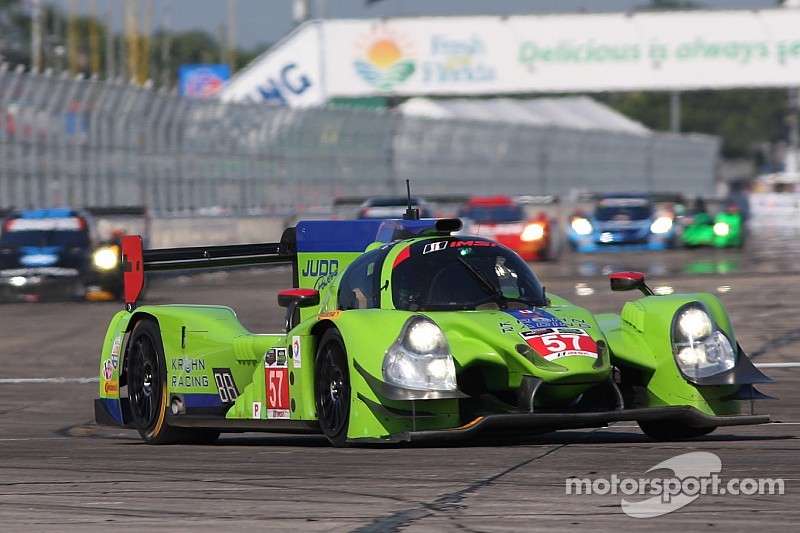 The two LM P2s entered for the second round of the Tudor USSC took the fight to the DPs on their home territory .

In the Sebring 12 Hours and the Barcelona 6 Hours the Ligier JS P2s and the JS 53 EVO 2s, two Onroak Automotive sports prototypes, confirmed their overall performance, speed and reliability. The two LM P2s entered for the second round of the Tudor USSC took the fight to the DPs on their home territory in free practice and qualifying for the Florida classic, and the CNs clinched a double in the VdeV Endurance Series.

The Ligier JS P2 racks up the pole positions

As in the Daytona 24 Hours last month the French car proved unbeatable in all the free practice sessions and qualifying. Following in the footsteps of the Ligier JS P2-Honda entered by Michael Shank Racing in the opening round, the Krohn Racing Ligier JS P2-Judd came out on top and set pole position for the Sebring 12 Hours.

In the Tudor USCC and in the FIA WEC whether the engine is a Nissan, a Judd or a Honda, the Ligier JS P2 has dominated eight out of the 10 qualifying sessions in which it has taken part since its first appearance.

The Sebring 12 Hours unfortunately again confirmed that in racing it’s not always the quickest car that wins. Despite its speed and reliability the Ligier JS P2 entered by Krohn Racing had to make do with eighth place overall and sixth in the prototype category at the end of 12 hours. Race incidents prevented it from scoring a better result, but once again the Ligier JS P2 in the hands of Olivier Pla set the fastest lap in the event in 1m 52.261sec.

Only 1h 40mn into the event Ozz Negri went off while attempting to pass another car, and the Michael Shank Racing no. 60 Ligier JS P2-Honda slammed into the tyre wall. The impact caused severe damage to the car and it was forced to retire, but this unlucky incident proved the solidity of the monocoque. The Onroak Automotive design team has paid particular attention to safety in the cockpit area.

The Ligier JS 53 EVO 2, the new benchmark in the CN category?

The opening round of the Endurance Proto Challenge in Barcelona enabled the Ligier JS 52 EVO 2 to confirm the efficiency of the evolutions made by Onroak Automotive to the CN prototype during the winter. The teams were particularly satisfied with the improvements in aerodynamic performance provided by a new front splitter, flaps and the optimisation of the rear wing, as well as the benefits of a new electronic control unit.

A double at the end of the Barcelona 6 Hours crowned with the fastest lap in the race confirmed the overall pace of the Ligier JS 53 EVO 2, and it looks like this car is going to be a permanent front-runner in the Endurance Proto Challenge all season.

The no. 17 Ligier JS 53 EVO 2, which started in seventh spot, crossed the finishing line in first place after six-hours racing giving the new version of the Onroak Automotive CN its maiden victory. Into second came no. 29 entered by Graff Racing confirming the cars’ potential: it also set the fastest lap in the race thanks to Yann Clairay.

Out of the six CN Ligiers at the start two took the flag in the first two places and four finished in the top 10!

The Ligier JS 53 EVO-Audi specially designed to meet the needs of the SRT 41 team racked up 118 laps without problems. It was Frédéric Sausset’s first motor race and the quadruple amputee proved this weekend just how well he has adapted to driving. Thanks to his coach and team-mate, Christophe Tinseau, he put in some very good stints setting very encouraging times as well as winning everybody’s admiration!

Frédéric Sausset, SRT 41 driver: “It gives me an incredible feeling of satisfaction to have made it to the end of this race in good conditions. It’s the result of the work of the team devoted to the “84” for the adaption and preparation of the Ligier JS 53 EVO-Audi, and it’s also a great reward for the work we’ve done with Christophe Tinseau over the last few months.

The results are very encouraging as taking part in a car race at this level despite my handicap was an ambitious project that caused some skepticism in certain quarters! I’m delighted that we’ve been vindicated this weekend and it bodes well for the events to come.”

Jacques Nicolet, Onroak Automotive President: “Onroak Automotive had a very busy weekend with six Ligier JS 53 EVO/2s in Barcelona and two Ligier JS P2s at Sebring just before the week of official testing for the ELMS and the FIA WEC! I’m delighted that we were able to service our clients and help them by supplying them with competitive cars. The VdeV teams had an almost perfect weekend. This first history-making double is a fitting reward for all the development work carried out during the winter by the team at Magny-Cours and the Onroak Automotive design office.

“Although the American outfits, MSR and Krohn Racing, met with mixed fortunes they again highlighted the speed and reliability of the Ligier JS P2. The nos 57 and 60 Ligier JS P2s were very quick in free practice and qualifying. They didn’t run into any technical issues during the Sebring 12 Hours enabling Olivier Pla to set a string of fastest laps at the end of the event. Unfortunately, race incidents deprived us of an exceptional result.”

Marsal toughs out top-10 in Sebring