The Morgan-Nissan LM P2 built by Onroak Automotive showed its exceptional qualities on what was a tough circuit for the LM P2s.

With the second-fastest lap in the race and a pace matching that of the teams which filled the first three places, OAK Racing was one of the revelations of the 2014 Daytona 24 Hours. The Morgan-Nissan LM P2 built by Onroak Automotive showed its exceptional qualities on what was a tough circuit for the LM P2s. 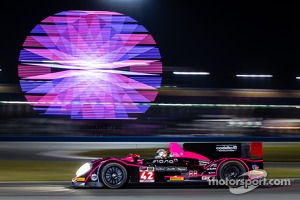 Only a stop during which the car had to go into its garage prevented Olivier Pla , Roman Rusinov , Gustavo Yacaman and Oliver Webb from scoring an outstanding result. Thus, the whole team is really looking forward to the Sebring 12 Hours, the next round of the Tudor United SportsCar Championship.

Olivier Pla , who qualified in 22 nd place after engine problems, took the start of the first 24-Hour race of the year. The Frenchman got his head down and fought his way through the cars ahead of him to seventh place before his first refuelling stop. The no. 42 Morgan-Nissan LM P2 moved up another place to sixth when Roman Rusinov got in for his first stint.

After two hours racing the Russian was already up into fifth behind four Daytona prototypes. During a long interruption of the race, Oliver Webb got in for his opening stint. Under the green flag as night was falling he managed to put the car into third place!

When Gustavo Yacaman got into the Morgan-Nissan LM P2 in turn for his stint, an alternator problem forced him to bring the car into the garage which made him lost sixteen laps to the leaders. Fifty-third after seven hours racing the OAK Racing team’s concentration didn’t waver. The Colombian continued to push hard to fight his way up the time sheets, and during the night all four drivers put in fault-free stints. At dawn the no. 42 Morgan-Nissan LM P2 had already sliced its way up into 14th place.

Rusinov,Yacaman and Pla kept up a searing pace and their reward was eighth place overall, seventeen laps behind the winner, sixth of the prototype finishers, and second LM P2 between the Muscle Milk Picket Racing Oreca -Nissan and the Extreme Motor Sport HPD-Honda. Thus, the Morgan-Nissan LM P2’s first outing in the United Sates has been a very encouraging one.

The car entered by OAK Racing, shod with Continental tyres, the official supplier for the prototype category, for the first time, set the second-quickest lap in the race (1m 39.828sec), was always able to match the speed of the three leading Daytona prototypes, and was also quicker than its LM P2 rivals. Without the alternator change the team would have been in a position to fight at the front. The performance of the four drivers and the whole team is a huge boost for OAK Racing as the French squad gets down to preparing for the next round: the Sebring 12 Hours, next March.

Philippe Dumas, team principal: “We’re born competitors so there’s no way we can be satisfied with eighth place. This being said our Morgan-Nissan LM P2 was the quickest of the LM P2s, and even if the Daytona prototypes enjoyed a considerable advantage on this circuit with its straights and the banking, we were in a position to pull off a real surprise result! It’s a great pity. Our problems this weekend stem from an alternator failure, one of the cheapest parts on the car! The team did a great job carrying out repairs and our drivers made a big impression. It bodes well for the rest of the season.”

Olivier Pla: “It’s a first for our team and for me at Daytona. I feel that we’ve done a good job. We’ve never run into this alternator problem before. A failure is part of motor racing and you have to accept it. The circuit didn’t favour our Morgan-Nissan LM P2, but at Sebring it’s be a whole different ballgame. I can’t wait to be there as I feel that we’ve got a great opportunity in Florida.”

Roman Rusinov: “We came sixth of the prototypes, but I think we could have scored a top-three finish. Before we had the alternator problem we were even lying second. The Morgan-Nissan LM P2 was running like a train and even if the Daytona prototypes were quicker in a straight line, we were on the pace. The safety car interventions didn’t play in our favour either and this is what prevented us from finishing even higher.”

Oliver Webb: “We made a great start to the race and after five hours we were already lying third. We were determined to maintain this pace. The alternator problem shattered our élan. The team did a great job repairing it and helping us to rejoin quickly: it was also one of the fastest in the pits. Fighting our way back from fifty-third place is almost a victory in itself. It’s a pity we weren’t able to battle till the end for a place in the top three.”

Gustavo Yacaman: “I’m a bit disappointed. Without the alternator problem we could have fought for a place in the top three and even for victory. The Morgan-Nissan LM P2 was very consistent throughout the twenty-four hours. The team did a fantastic job in the pits. We’ll just have to do that little bit more at the next race.”

My job in F1: Chief strategist at Sauber