The Extreme Speed Motorsports (ESM) team continued on its trek to a home track victory at Sebring International Raceway today during qualifying for the 62nd Mobil 1 Twelve Hours of Sebring Fueled by Fresh from Florida. As the second race on the TUDOR United SportsCar Championship schedule and second round of the Tequila Patrón North American Endurance Cup (NAEC), ESM seeks its first team win of the season and valuable points in both the series championship as well as the NAEC. 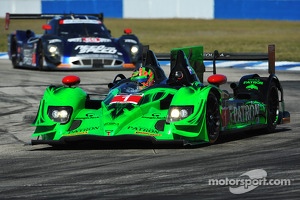 The Stuart, Fla.-based team maximized on-track time and continually made improvements to the Tequila Patrón-sponsored Honda Performance Development ARX-03b race cars. A daunting 3.74-mile, 17-turn circuit requires the race cars to be engineered to maximum capacity. The Sebring venue is notoriously brutal on machinery, but ESM has the wherewithal to ensure the race cars withstand the 12-hour event.

Ryan Dalziel qualified the No. 1 Tequila Patrón HPD in the fourth position, with a best lap time of 1:52.662 (119.508 mph) less one second behind the pole-winning car. Dalziel, a two-time winner at Sebring, was pleased with the qualifying effort and confident the race car will improve throughout the race.

Co-driver Scott Sharp will pilot the No. 1 for the first stint on Saturday, followed by David Brabham and then Dalziel. As the race progresses, the team is prepared for the ever-changing conditions, especially since the race runs from the warm morning, hot afternoon and slowly fades into cooler evening temperatures.

Johannes van Overbeek qualified the No. 2 Tequila Patrón HPD in the eighth position. During the 15-minute qualifying session, van Overbeek’s best lap time was 1:53.393 (118.737 mph), less than two seconds behind the pole-winning car. Satisfied with the starting position, van Overbeek and co-drivers Ed Brown and Simon Pagenaud are focusing on maintaining a lead spot in the class and running a clean racing all the way to the podium.

At the start of the race, van Overbeek will be behind the wheel. Brown is set to drive second, followed by Pagenaud. One year ago, Brown, van Overbeek and then co-driver Anthony Lazzaro finished fourth in this event. The benchmark has been set for this team and a podium finish is the target.

Before the sun rises at Sebring, ESM will formulate its race strategy. Part of the team’s strategy will be a discussion on managing traffic and equipment during the 12-hour race. Saturday’s schedule includes a 25-minute warm-up session at 8 a.m.