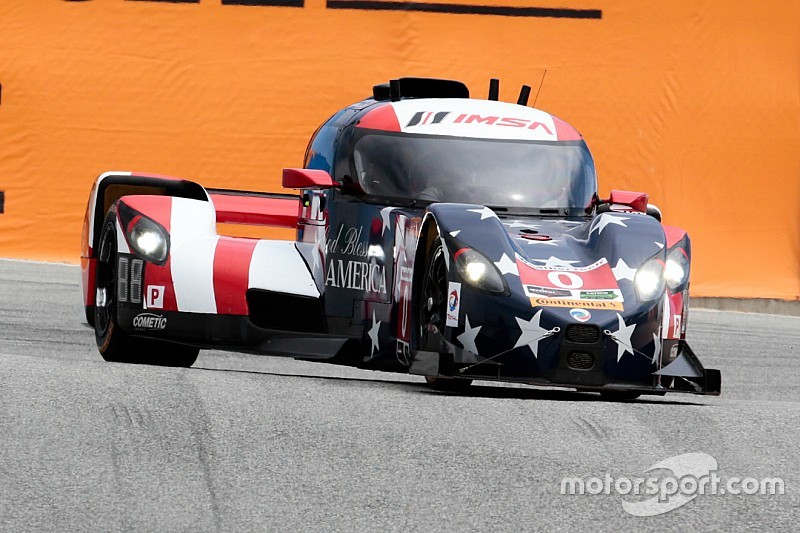 Monterey, Calif. May. 1, 2016 – Panoz DeltaWing Racing took their first top five result of the season in an eventful and exciting race at Mazda Raceway Laguna Seca.

Sean Rayhall started the race in sixth and maintained the position through the first 40 minutes of the two-hour race. Rayhall then took advantage of the yellow that arrived 41 minutes into the race. With a very quick pit for fuel, Rayhall returned to the track as the overall race leader. The DeltaWing showed its true competitiveness and maintained the lead for several laps.

At the third yellow just before the half-way point, the DeltaWing was in fifth position. With 52 minutes to go Katherine Legge took over and in six laps she recorded the DeltaWing’s fastest lap time of 1:21.314. In 26 minutes, Legge had battled her way back to fifth place overall. Legge maintained this position through to the checkered flag to finish the race.

The team will now return home to prepare for an upcoming test in the latter part of May at Watkins Glen and look forward to building on the gains and improvements seen today.

Sean Rayhall: “It was great to finish fifth here today. I was really optimistic about the car on the long run. We got called out making a strategy call that cost us a bit of time, but all in all a great performance by the Panoz DeltaWing Racing crew. I think we are going to be a lot better at Watkins Glen and I have every confidence the team will maintain this momentum. I really want to thank Dr Panoz and I wish that Catherine Crawford was here to celebrate with us.”

Katherine Legge: “Our first finish of the season within the top five feels like a rewarding result for all the hard work by the team. I think we are confident in all our improvements moving forward and are excited to further this at the Watkins Glen test later this month. I wish Catherine a continued speedy recovery and hope she is able to celebrate this result as she has played such a big part in our success.”

Tim Keene: “I’m very happy with the effort by everyone in the team. We tried a little something different in the first pit stop to gain track position as we were running competitive lap times when we pitted. We chose not to take tires and in hindsight we should’ve taken tires as for some reason our lap times dropped by almost three seconds per lap after the pit stop. All in all, a solid top five finish and it feels good moving forward.”