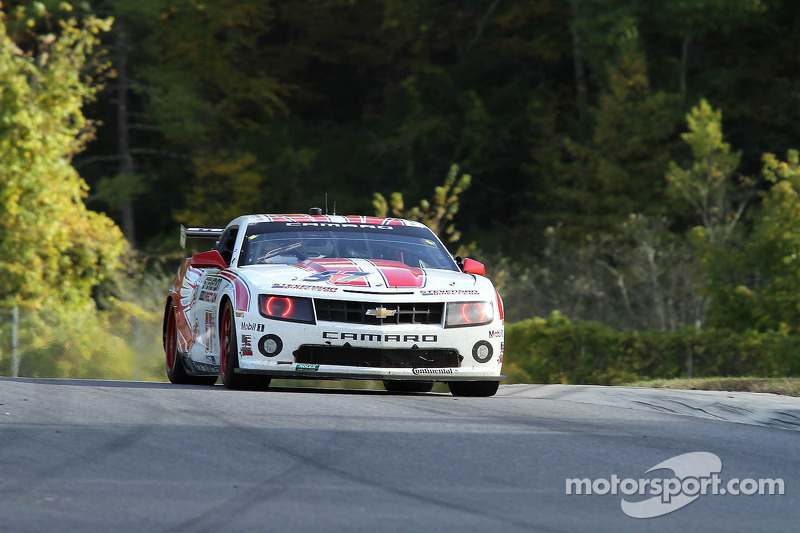 Hopes were high for Stevenson Motorsports as the team returned to Mazda Raceway Laguna Seca for the Continental Tire Monterey Grand Prix. Having won the event twice in the past three years and finished second in last year’s race, Stevenson was looking for a repeat performance as the Stevenson group returned this year with the new Chevrolet Camaro Z/28.R.

Following the race-winning outing in the last event at Sebring International Raceway, the team was saddled with some added heft as IMSA updated the Balance of Performance rules with an extra 100 lbs. for the Z/28.

Matt Bell, who calls Mazda Raceway Laguna Seca his home track, and Andy Lally joined forces in the No. 9 Camaro Z/28.R. Lally opened the event from seventh on the grid, while teammates Andrew Davis and Robin Liddell were paired in the No. 6 Camaro Z/28.R with Davis at the wheel from the fourth starting slot.

The opening stint was relatively uneventful for the Stevenson drivers as it was stunted with full course caution periods, keeping the race and the team from getting into a rhythm, though both cars had moved up the order early on.

A full course caution as the race approached the 45 minute mark allowed the team to pit for tires, fuel and a driver change with both entries. Unfortunately, soon after that, things started to get exciting, but not in a good way. Liddell reported that something was amiss with the gear lever and by the end of an extended period on pit road for the fix, Liddell had fallen to the very tail end of the lead lap.

Meanwhile, Bell found himself in a fierce battle at the front end of the field, as multiple machines fought for space on the narrow track. A full fuel load was called for on the next stop, sliding him back into the clutches of cars he had already overtaken on track.

Through a series of additional full course and local caution periods, both cars continued to battle, working back into the 10th and 12th positions. With less than 10 minutes of the two and a half hour event remaining, Liddell was collected as two other machines had contact as the Scotsman was fighting for a top-10 result. While Liddell was able to get back on track, he had lost more than 10 spots and found himself taking the checkered flag 18th in line. Bell brought the No. 9 Camaro Z/28.R home in 11th position.

“We had the shifter come apart on one car so that kind of threw the car off strategy,” said Team Manager Mike Johnson. “With the No. 9 car we did some stuff (with strategy) that got them some track position, we had the position and we should have splashed on the yellow but we didn’t so then we had to pit him later and it was too late. We put new tires on the car but we still kept going backwards. I don’t know how much better we could have been. It’s easy to sit and complain about the weight, but when there is a Camaro that finishes second, you know you have some work to do.”

The team now looks ahead to the next Continental Tire Sports Car Challenge event at Lime Rock Park on May 23-24.